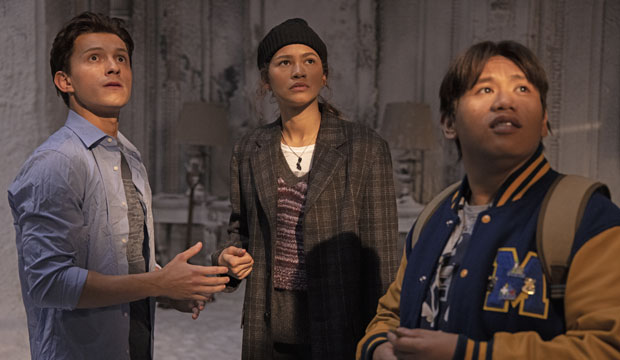 There’s been quite a bit of chatter about “Spider-Man: No Way Home” and its chances at Oscar gold given its excellent reviews and box office dominance that has defied a pandemic. But if the film really is a serious contender for Best Picture, why not its performance? There’s no denying that there are actors in the movie who are doing great work, whether or not you see it as “just” a superhero movie. [THE REST OF THIS ARTICLE CONTAINS SPOILERS]

First and foremost, you have to look at that performance by Tom Holland, which is probably some of the best work done by the 25-year-old in his young career thus far. There are seriously emotional moments in “No Way Home” that wouldn’t work if Holland weren’t able to sell them, especially the death of his Aunt May (Marisa Tomei) and the decision to make everyone (including his love, Zendaya’s MJ) forget that Peter Parker existed. The first of these is a tough moment as the young man loses someone who was like a mother to him. The latter is also potent and memorable, since it’s where we leave Parker at the end of “No Way Home.” Critics are praising him for his “gravitas“; he’s “better than ever.”

What’s interesting is that the nature of the multi-verse plot meant that Holland got to work with the previous cinematic Spider-Men, Tobey Maguire and Andrew Garfield, the latter of whom is having a pretty good year for reasons beyond this blockbuster. 25 of Gold Derby’s Experts as of this writing have Garfield getting his second Oscar nomination for “tick, tick… Boom!” Surely, Holland could look to Garfield as inspiration for the direction in his career — perhaps the younger star also has an Oscar nomination in his future.

The aforementioned Marisa Tomei won an Oscar very early in her career for “My Cousin Vinny,” and she’s been nominated twice more since then for “In the Bedroom” and “The Wrestler.” She’s been playing Aunt May for three “Spider-Man” movies, and she has a number of significant emotional scenes in “No Way Home,” even if that’s just par for the course for the talented actress. As for fellow supporting actress Zendaya, reviews have noted that she “creates a smart and complex heroine” in a “stellar,” “MCU-best turn.”

Another actor getting attention for his performance in the movie is Willem Dafoe, who reprised the role of Norman Osborn/The Green Goblin that he originated in Sam Raimi’s very first “Spider-Man” movie in 2002 and is “impossible to get tired of,” according to one review. One might not think of a comic book villain as an awards play … except for the two actors who won Oscars for playing a comic book villain. First was Heath Ledger’s performance as the Joker in Christopher Nolan’s “The Dark Knight.” Ledger died before the release of the movie, but his performance was one of the sure-thing Oscar bets that season. Sure enough, he did win a posthumous gold man for Best Supporting Actor on Oscar night.

And just two years ago Joaquin Phoenix won his first Oscar for portraying the “Joker” in the movie of the same name, and Dafoe has been circling an Oscar for many, many years, with the most recent of his four nominations coming for “The Florida Project” (2017) and “At Eternity’s Gate” (2018). It would be ironic if Dafoe returning to a role he played two decades ago was what it took for Oscar voters to take him seriously enough to win his first gold man.

Only time will tell whether “Spider-Man: No Way Home” connects with voters in academy’s acting branch the way some of our Experts think it will connect with voters at large in the Best Picture race. The cast didn’t make the cut at the SAG Awards, not even the stunt performers, so Oscar recognition for the film’s performances may be an uphill climb, but if the film is truly Best Picture caliber, then its actors belong in the conversation too. Maybe it just comes down to something extra special like what Ledger and Phoenix did playing the Joker. But I don’t think the academy is going to be able to ignore the hugely popular superhero machines for that much longer.