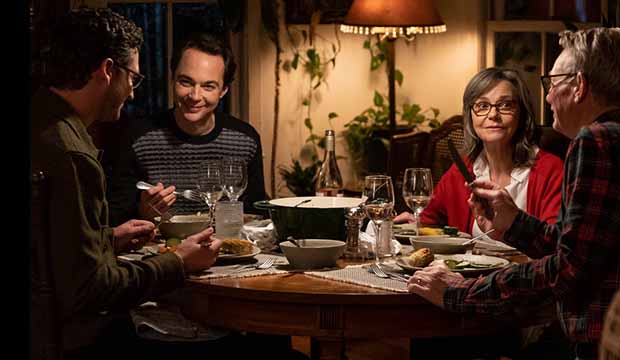 Focus Features’ tearjerker “Spoiler Alert” is now open nationwide, and audiences everywhere are driving Kleenex stock through the roof. Based on TVLine founder Michael Ausiello‘s 2017 memoir “Spoiler Alert: The Hero Dies,” the film is directed by Michael Showalter and it may or may not be the latest installment in the “Smurfs” movie series (you’ll have to watch it and decide for yourself). In all seriousness, “Spoiler Alert” details the ups and downs of Ausiello’s relationship with Kit Cowan, which tragically ends after Cowan passes away from neuroendocrine cancer.

“Spoiler Alert” reviews are pouring in at Rotten Tomatoes, where it currently has an 82% critics score and a 96% audience score. The acting duo of Jim Parsons and Ben Aldridge are receiving unanimous praise for their roles as Ausiello and Cowan, respectively, with Odie Henderson (Boston Globe) raving that the two male leads “have fantastic chemistry together.” Parsons is a four-time Emmy winner for “The Big Bang Theory” while Aldridge is an up-and-coming English actor perhaps best known for “Our Girl” and “Fleabag.”

KiMi Robinson (Arizona Republic) writes that “Spoiler Alert” is “a beautifully balanced and well-paced film that knows when to be brutally honest and when to give viewers a moment of reprieve.” Randy Myers (San Jose Mercury News) adds, “It’s heartfelt, genuine, funny and yes, terribly sad but it also celebrates love and life, even when it’s dealing with a tragic illness.” And David Rooney (Hollywood Reporter) readily admits, “This is a love story that’s frank about the waning of passion, the ebb of sexual desire, the curdling of affection into irritation, infidelity and the seeming death knell of the trial separation.”

Sally Field and Bill Irwin round out the main cast as Kit’s parents, Marilyn and Bob. They are “great together as Kit’s parents, who are so loving and accepting, you wonder why Kit waited so long to come out to them,” concedes Richard Roeper (Chicago Sun-Times). The top critic also highlights director Showalter and screenwriters David Marshall Grant and Dan Savage for displaying “a deft touch for blending wry humor with heartfelt drama.”

Some other notable reviews for the film include Sara Michelle Fetters (MovieFreak.com) calling it “a delightfully effective melodrama, one that pulls few punches and isn’t afraid of wearing a plethora of emotions out in the open for all to see,” and Kristen Page-Kirby (Washington Post) noting that “unlike so many ‘illness movies’ … Kit’s life is not mined for the lessons it teaches us.” Perhaps my favorite proclamation of all is this one from Katie Rife (RogerEbert.com): “This is a nice film. A sweet film. A film you can watch with your mother-in-law.”

Ausiello has known Parsons for years, of course, as the television journalist covered “The Big Bang Theory” profusely throughout his career in the industry. Before founding TVLine, a sister site of Gold Derby, Ausiello worked at Entertainment Weekly and TV Guide. Fun fact: when the Gold Derby gang attended a book reading of “Spoiler Alert: The Hero Dies” at Barnes & Noble in September 2017, guess who served as the moderator? It was Parsons! And this was years before a movie version was officially given the green-light by Focus Features.

“Spoiler Alert” is currently playing in theaters everywhere and is a dark horse awards contender in many categories. It recently received a nomination for Next Big Thing at the 2022 Queerties where it competed against other gay-friendly fare like “Bros,” “Queer as Folk,” “The White Lotus: Sicily” and ultimate winner “Hocus Pocus 2.”