This year, Netflix’s “Squid Game” received 14 Primetime Emmy nominations that were fairly well spread out between the cast, creator Hwang Dong-hyuk’s writing and direction, and for many of his creative below-the-line collaborators. One of the people nominated for an Emmy was composer Jung Jae-il for his haunting main title theme music for the Korean survival series. Netflix has shared with Gold Derby an exclusive behind-the-scenes video that delves further into the writing of that distinctive record and toy drum theme, and how that managed to set up the tone for the entire series (watch above).

SEELee You-mi (‘Squid Game’): Ji-yeong is a fan-favorite because ‘everyone wants and needs a person like that’ [Exclusive Video Interview]

“The most important thing for me is what I see on screen visually,” says Jung about the inspiration for the theme, citing the children’s game that opens the first episode of the show. The game made him think, “Should I implement children’s music? Just like that, I differentiate not only the instruments, but also the type of harmony and melody.”

“Opening scenes are very important for composers like me,” he elaborates. “That’s the point when you first set on a plan after having gone through much hesitation.”

Jung reveals that he originally created a lot of different versions of that first theme. “Back then, the director said that it feels like a B-rated movie, but it still sounds fun,” Jung adds. They sat on it for a bit before moving on to the current iteration.

Fortunately, things worked out. “When we were about 60 or 70 percent finished with post-production, [Director Hwang] said, ‘I find this song more intense. Let’s go with this song.’” And that’s how the theme was selected.

Hwang also talks about Jung’s theme. “The one that plays from the start of episode 1, the composer mentioned that he’d be using the recorder and other instruments that we’d play as kids,” he says. “The moment I heard it, I realized why people call him a genius. I was so new. I never thought it would be possible to compose the main theme for a series with those kinds of instruments.”

“It tied in really well with the storyline and the concept, and there are melodic variations as the song progresses,” the executive producer adds admiringly. “How the layers and notes change, in my opinion, mirrors how the innocent mind changes as we grow old. I think this title theme represents the essence of the show ‘Squid Game.’” 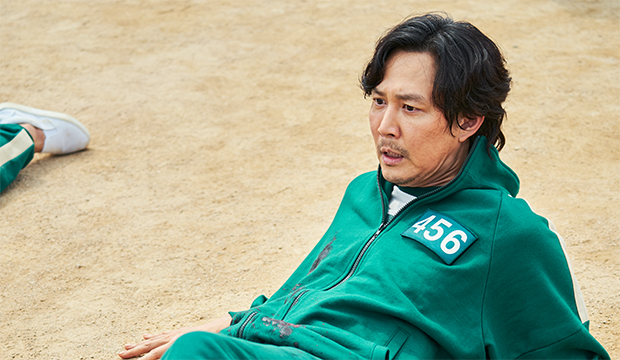