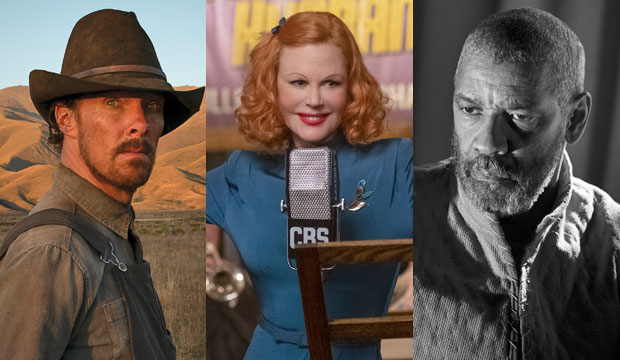 It’s hard to fathom that the Oscars may no longer be about theatrical releases and seeing cinema in the ideal environment with the best sound and picture possible (mostly). Many movies are still getting the necessary one-week theatrical runs to be eligible for consideration, but even that is no longer mandatory, thanks to some of the allowances made because of the COVID pandemic.

For the 2020 Oscars, none of the eight Best Picture nominees received a theatrical release in New York City or LA because movie theaters weren’t open in either city until March 2021, after the eligibility period. Even so, the eventual Best Picture winner, Chloé Zhao’s “Nomadland,” played at drive-ins as part of film festivals in Telluride and New York, the rare opportunity for anyone to see that movie on the big screen.

SEE‘Dune’ predicted to receive same number of Oscar nominations as ‘Joker,’ but there’s a twist

Instead, “Nomadland” arrived on Hulu on Feb. 19, while simultaneously opening in select cities where theaters were still open. But one can presume a lot of Oscar voters watched it at home while things were still uncertain regarding the pandemic.

Movies that won in other categories, such as “The Father” (Actor and Adapted Screenplay), “Promising Young Woman” (Original Screenplay), and “Minari” (Supporting Actress) were likely seen on the academy’s virtual platform, though they also got theatrical releases, some of them upstate or in Long Island where some Oscar voters reside or moved to when the pandemic broke out. Indiewire’s Thomas Breuggemann, in analyzing the data, reported that all four of the above mentioned movies “were strong PVOD performers.” Not exactly Netflix, but still available outside movie theaters.

Although movie theaters in this country haven’t been shut down due to the Omicron variant, we’re still looking at a cinema ecosystem where more movies are being released on streaming and on demand either simultaneously or shortly after their theatrical releases. Netflix has perfected their own business model for their Oscar hopefuls over the past few years, helping get attention for movies like “The Irishman,” “Ma Rainey’s Black Bottom,” “The Two Popes,” “Roma,” and “Marriage Story” by streaming them at a time when they could get the most eyes during the awards season. The streamer has even bought key movie theaters like the Paris Theatre in New York and the Egyptian in L.A., using them for prestigious events (with COVID protocols) but also to achieve Oscar eligibility.

This year’s crop of Netflix movies in contention include Jane Campion’s “The Power of the Dog,” Lin-Manuel Miranda’s musical “tick, tick… Boom!,” Maggie Gyllenhaal’s “The Lost Daughter,” Rebecca Hall’s “Passing,” and Adam McKay’s “Don’t Look Up.” These have all premiered on the streaming service over the past two months during key nomination voting periods. Many Netflix subscribers access the service through their televisions, which makes it even easier to watch what needs to be watched.

Amazon and Apple are also in the mix. The former has Aaron Sorkin‘s “Being the Ricardos” and “The Tender Bar” on its Amazon Prime Video platform, with Asghar Farhadi‘s “A Hero” to come on January 21, six days before Oscar nominations voting begins. Apple has the Sundance Film Festival winner CODA” only available on Apple TV+, and it was joined by Joel Coen‘s “The Tragedy of Macbeth,” starring two-time Oscar winner Denzel Washington and four-time winner Frances McDormand, which hit the streaming service on January 14.

It’s a little more difficult to see “West Side Story,” which is only playing in theaters (and on the academy’s platform). And while many may have seen Will Smith in “King Richard” during its one-month streaming on HBO Max, it’s harder to watch it now. Could that possibly give a leg-up to Netflix contenders Andrew Garfield (“tick, tick… Boom!”) or Benedict Cumberbatch (“The Power of the Dog”)? Could Olivia Colman end up winning Best Actress since her movie, “The Lost Daughter,” is easier to watch than Kristen Stewart‘s “Spencer,” which can be bought or rented on digital platforms but isn’t yet on any streaming services that awards voters might already be browsing? Kenneth Branagh‘s “Belfast” has also hit VOD but no subscription streamers yet as of this writing.

To many, there’s also a perception that a theatrical release is bad if it bombs at the box office (similar to Broadway musicals). So when movies like “Nightmare Alley,” “West Side Story,” and “King Richard” report low numbers, it risks creating the narrative that people didn’t go see them, ergo, they must not be very good. (Anyone who has seen those three movies can attest to that not being the case.)

Meanwhile, Netflix is like Teflon because they don’t report box office, but release viewing numbers shortly after their Oscar movies hit the streaming service, giving them the ability to shape the narrative about their films’ popularity. Similarly, “Being the Ricardos” was probably seen more once it hit Amazon Prime Video than during its minimal theatrical release, and Netflix leading the SAG Awards nominations for film shows how much streaming movies are watched by industry voters.

The point is that Netflix, Amazon, and Apple TV+ movies are readily available on people’s television sets. There’s no need to sign onto the academy’s virtual platform or go to a movie theater in order to watch them. Awards voters may be more likely to see your movie the easier you make it for them, especially when COVID doesn’t seem like it’s going anywhere for a while.