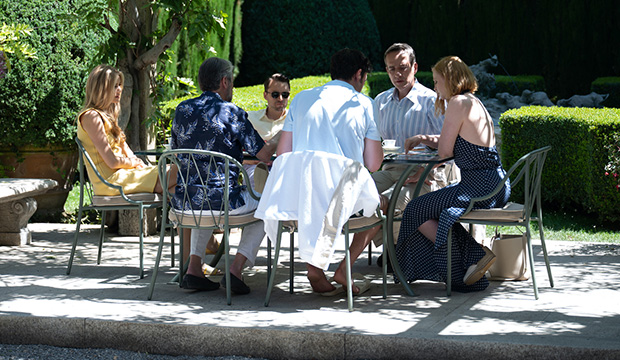 For a show that’s never been nominated at the Screen Actors Guild Awards, “Succession” could be on the cusp of making history. The Emmy-winning series, which just wrapped up its third season with another superb finale, is expected to finally break through in the SAG Awards’ three drama TV categories — it’s in first place in ensemble and actor and second in actress in the odds. And it’s the drama actor race where it could make the biggest splash and enter the record books as the first show to score three nominations in the category in the same year.

Because the SAG Awards do not have supporting TV categories, all the men and women of TV have to fight for five measly spots in their respective categories. This, obviously, favor the leads, but supporting players pop in here and there. However, no show has produced more than two co-star nominees in the drama actor category, the most recent being “The Morning Show” landing bids for Steve Carell and Billy Crudup two years ago. “Succession” boasts two leading men, Jeremy Strong and Brian Cox, who currently occupy the top two spots in the odds. Its Emmy-nominated supporting men — Kieran Culkin, Matthew Macfadyen and Nicholas Braun — are not in the predicted lineup, but if SAG-AFTRA is finally caught up on all the Waystar (or should we say GoJo now?) drama, don’t be surprised if “Succession” snags a third spot.

Culkin is best positioned at the moment — and not just because the odds have him in sixth place (Crudup is in third, followed by “Pose’s” Billy Porter and “This Is Us'” Sterling K. Brown). The actor had a strong stretch at the end of the season, flexing his deft comedic and dramatic chops as Roman rose and fell in quick, um, succession. The penultimate episode featured the instantly iconic moment when Roman accidentally sent his dad Logan (Cox) a dick pic, and Culkin’s elastic face was the embodiment of one’s soul evaporating from one’s body. The episode also just so happened to have aired a day before nomination voting began. And in the finale, Roman, initially torn between uniting with his siblings to take down their dad, regressed into a lost little boy as he suffered betrayals not just from his parents but Gerri (J. Smith-Cameron).

If Culkin came on strong at the end, Macfadyen, who’s in ninth place, arguably had the most consistent season as all the pieces fell into place with the last-second reveal that Tom is Team Logan and had tipped him off about the siblings’ plan to stop him from selling Waystar to Lukas Matsson (Alexander Skarsgard). Macfadyen doesn’t have as many zingers as Culkin does, but he expertly captured the pathos of Tom, imprisoned in a loveless marriage to Shiv (Sarah Snook) and fretting actual imprisonment when he pledged fealty to Logan to be the fall guy for the cruise ship scandal, before becoming the kind of killer at the end that Logan loves. Perhaps like Shiv underestimating Tom, we are underestimating Macfadyen’s chances.

In 13th place, Braun is a long shot, but he has already surprised us before when he nabbed an Emmy nomination in 2020 that few predicted. Greg remains a fan favorite, and Braun’s chemistry with Macfadyen continues to be off the charts, culminating in the finale when Tom asks Greg to join him in a deal with the devil wherein Greg can maneuver his way to “the bottom of the top.” “What am I gonna do with a soul anyways?” Greg says. “Souls are boring. Boo, souls!” Only Braun could deliver this without it sounding as cheesy as it looks in print.

The good news for the “Succession” supporting guys is that some of the predicted men ahead of them have disadvantages as well. While Crudup looks safe — he was nominated for the first season and won the Emmy in 2020, beating all three “Succession” dudes — “Pose,” just like “Succession,” has never been nominated for a single SAG Award. Porter failed to make it in after he won the Emmy in 2019. And though former champ Brown has never missed a nomination, this is the first time that “This Is Us” is not airing in the fall as its sixth and final season premieres in January so it can air in an uninterrupted block.

While drama actor has never seen triple nominees from one show, it has happened in other categories. Just last season, “The Crown” fielded Gillian Anderson, who won, Olivia Colman and Emma Corrin in drama actress, 21 years after “The Sopranos” first accomplished it with winner Edie Falco, Lorraine Bracco and Nancy Marchand. It hasn’t happened in comedy actress, but the comedy actor category featured three “Everybody Loves Raymond” stars 18 years ago: Ray Romano, Peter Boyle and Brad Garrett; they lost to “Monk’s” Tony Shalhoub.