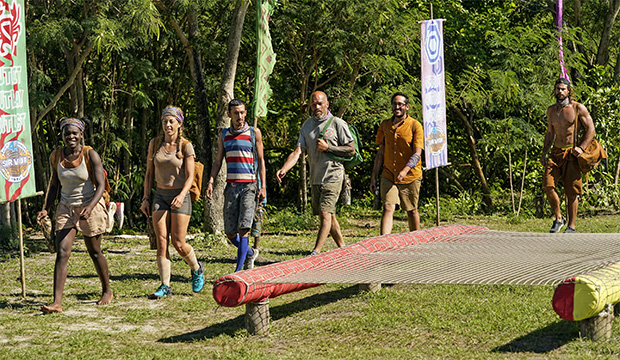 Warning: this story contains spoilers from the May 18 episode of “Survivor 42” — read at your own risk!

“Maryanne got me, she got me good,” sighed Omar Zaheer after being shockingly eliminated during the penultimate episode of “Survivor 42.” The 31-year-old exotic animal veterinarian would have been the first castaway of Muslim faith to ever win CBS’s reality TV show, but his plans were foiled when Maryanne Oketch, Romeo Escobar, Mike Turner and Jonathan Young turned the tables on Omar and Lindsay Dolashewich by voting him out in sixth place. Read on for Omar’s “Survivor 42” exit interview from the end of Episode 12.

“I knew playing with [Maryanne] was like playing with fire and I should have listened to my gut,” Omar declared after having his torch snuffed by host Jeff Probst. “But I was ‘Survivor’ confident and that is the worst thing you can be.” Thus, he became the latest castaway to be blindsided during this unpredictable 42nd season.

Despite Mike and Jonathan being hesitant about Maryanne’s plan, she was adamant about wanting to make a big move — and taking out Omar was the only way. After Lindsay won the immunity challenge, the strong guys worried Lindsay would give her hidden idol to Omar. That’s why they hatched a plan to split the votes with Omar getting three (including Maryanne’s extra vote) and Romeo nabbing two; Omar and Lindsay cast their votes for Jonathan. In the end, Lindsay didn’t give Omar her idol because she didn’t want it to be re-circulated back into the game.

“I still had a blast,” Omar declared with a smile, “and this was the best experience of my life.” Indeed, Omar’s strategic gameplay was one that impressed viewers. He really came alive after the merge, when (even without a vote) he was able to convince the majority of the tribe to oust Lydia Meredith when she wavered on going after challenge beast Jonathan.

When the Top 10 players were temporarily split up into two groups of five, Omar and Hai Giang were instrumental in sending home Rocksroy Bailey, because he wasn’t someone they could work with or mold to do their bidding.

During the Top 8 episode, Lindsay won the reward challenge and took Omar and Mike with her to an overnight pizza date. That’s where Omar bold-faced lied to Mike about Hai calling him a “puppet.” It ruined the strong bond between Mike and Hai, and resulted in Hai being kicked off the island. “Tell a good lie, not a stupid one,” Omar proudly declared, a quote that was used for that week’s episode title.

Now only five people remain in the running to win “Survivor 42”: Maryanne, Lindsay, Jonathan, Mike and Romeo. Who do YOU think has a shot of making it onto the iconic “Survivor” winners list?