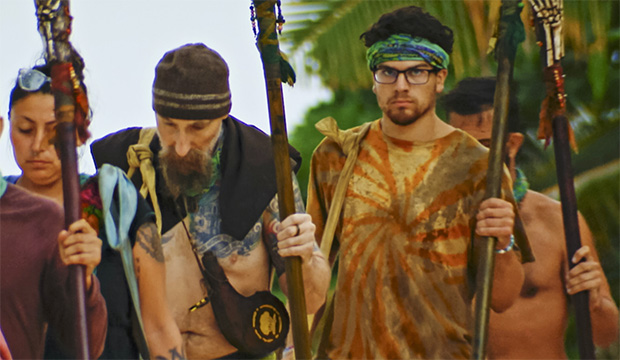 Following last week’s elimination of Noelle Lambert from “Survivor 43,” only the Top 7 players remained in the running to win the $1 million grand prize. Of this group, three people still possessed immunity idols — Jesse Lopez, Karla Cruz Godoy and Cody Assenmacher — while the other four had nary an advantage to speak of — Owen Knight, Sami Layadi, Cassidy Clark and Mike Gabler. So whose torch did Jeff Probst snuff out at the conclusion of tribal council?

Below, read our minute-by-minute “Survivor 43” Episode 11 recap/live blog of “Hiding in Plain Sight” to find out what happened Wednesday, November 30, 2022 at 8:00 p.m. ET/PT. Then be sure to sound off in the comments section about your favorite castaways on CBS’s reality TV show, who annoys you the most and who you think will ultimately join the “Survivor” winners list and take home the $1 million grand prize.

Keep refreshing/reloading this “Survivor 43” live blog for the most recent updates.

8:00 p.m. – “Previously on ‘Survivor’!” In the 10th episode‘s reward challenge, Noelle came from behind after getting stuck on the balance beam to win a night away from camp at the “Survivor Sanctuary.” She chose to bring Jesse, Owen and Sami along with her to enjoy the food, bedding and letters from home. Cassidy later won the individual immunity challenge, which disrupted the majority’s plans as they wanted to send her to the jury. Ultimately, the tribe voted five for Noelle, two for Karla and one for Sami. Who will be following Noelle out of the game? Let’s go!

8:01 p.m. – Once again Owen was on the wrong side of the vote, but it was a first time occurrence for Sami, who was blindsided by the vote switching against Noelle. Sami knew that he was in a hole after the vote, but he made it worse when he attempted to lie to Karla that he didn’t vote against her and Gabler did instead. He walked back his words and admitted to writing Karla’s name down by saying he thought the votes were going the other way and that she might play an idol anyway, but it was clear that the vote put him in hot water with people like Karla, Cassidy and Jesse that thought he was working with them. Elsewhere, Gabler tried to make Owen feel comfortable by suggesting that he has a long term plan to get them both to the final three. Gabler was convinced that he’s “hiding in plain sight” as the biggest threat in the game.

8:06 p.m. – The next morning, Sami tried to salvage his relationship with Karla by throwing Cassidy under the bus with a lie. He told Karla that Cassidy was the first one to throw her name out as an option, calling into question for Karla one of her strongest partnerships in the game. In a private conversation, Karla reaffirmed with Cassidy and brought up that she had told Cassidy about her idol and wants to make sure she’s not telling anyone about that. The two of them reaffirmed trust in each other, but Karla considered if she can believe that Cassidy won’t tell the others about her idol.

8:12 p.m. – A beautiful Day 21 sunrise moment was broken up by the arrival of boat mail on the horizon. On the boat was a message that Karla read to the group: “With only seven left in the game, any advantage is an advantage worth having. There’s one hidden in your jungle. Go.” With that, everyone darted in different directions in search of the mysterious advantage. Over the course of the afternoon, almost everyone walked right by the advantage hanging on a tree trunk. So many of them missed it that after a significant amount of time they each grew exhausted of the fruitless search. Eventually Cody laid eyes on it just as he was wrapped up in a conversation with Gabler. He stalled until Gabler left and then claimed the advantage. Reading it to himself, Cody earned a power to bet on one other player to win the next immunity challenge. If his bet wins immunity then he, too, will earn immunity. Before writing down his bet he was also told that the challenge would be the classic game of holding breath under water while the tide swells over the players.

8:22 p.m. – At the site of the immunity challenge, Jeff disclosed to the entire group that Cody won the advantage and what the details of the Choose Your Champion advantage meant for the challenge. Cody didn’t, however, have to tell anyone who he bet on and Jeff explained that it would be Cody’s secret to keep until after the votes are cast at tribal council.

8:26 p.m. – First to drop out of the challenge was Gabler followed shortly after by Sami. After one of the longer swells of water, Jesse also dropped out and only four were left. After an hour, the tide was reaching its peak and the swells of water were fully submerging the four remaining players. Just ahead of the 90 minute mark, Cody dropped out. With the onlookers referencing one of the longest swells of the challenge, Cassidy had to drop out at the two hour mark. With only Owen and Karla still left nearing the three hour mark, Jeff noted that the tide was dropping to a point that there would no longer be a challenge to compete in. With that in mind, Jeff made the “unprecedented decision” to end the challenge and award both Karla and Owen immunity for outlasting the tide.

8:39 p.m. – Back at camp with two players holding immunity and a third possibly getting it through a bet, only four were being considered as options for the vote: Sami, Cassidy, Gabler and Jesse. Owen and Cassidy optioned Sami as the easy vote that everyone could get on board with, but Cassidy was worried that people would go for her in order to take a strike against Karla. Little did Cassidy know that Karla was seriously considering leading the vote against Cassidy in order to eliminate the threat of Cassidy possibly telling everyone about her idol.

8:42 p.m. – News that Karla of all people was suggesting a Cassidy vote did not sit well with Jesse because it meant that Karla must have strong connections left in the game even without Cassidy. Jesse thought that maybe Karla is tight with Sami and so he wanted to turn the vote back to Sami at the same time that everyone else seemed poised to go with the Cassidy vote. Jesse added to the plan that they allow Karla to still vote against Cassidy so that it drives a wedge between the two of them the following week. When Jesse took the plan to Cody, they had a disagreement because at this point Cody believed Cassidy and Karla in the game together a bigger threat than Sami and his ability to build fire easily.

8:50 p.m. – At tribal council, Sami was very open about his position at the bottom of the game and that he’s available to everyone else as a “free agent” that they could use in future votes. Jeff agreed that it’s a good pitch, but then Sami may have put his foot in his mouth later by asserting that he plans to sacrifice his vote in order to play his Shot in the Dark advantage. Karla was not pleased with Sami’s plan because it exposed how untrustworthy he is within a group.

8:56 p.m. – Before Jeff read the votes, he revealed Cody’s bet on Owen to win immunity which meant that Cody earned immunity and any votes cast against him would not count. Additionally, Sami confirmed that he played his Shot in the Dark, so there was no vote from him, but then Jeff showed the scroll he selected and it said “Not Safe,” meaning all votes for Sami would still count. No one else played an advantage or an idol, so Jeff read the votes: Sami, Sami, Sami, Sami. Without Sami’s own vote, it was truly unanimous and Sami was sent to the jury.

NEXT TIME: Cassidy learns that Karla was pushing to vote her out which sets Cassidy on a warpath against Karla while Gabler and Owen are also at odds with each other.