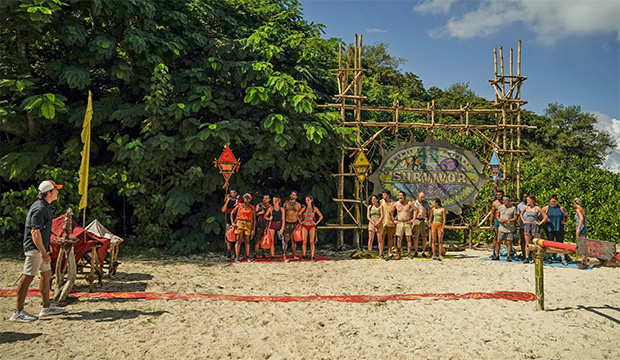 After the elimination of Morriah Young from “Survivor 43,” the Baka tribe was at a noticeable numbers disadvantage compared to their competition. Thus, they went into the second episode with success on their minds, because another immunity loss would drop them to four tribe members, compared to six each for Coco and Vesi. So who won the second immunity challenge, and which castaway ended up having their torch snuffed by Jeff Probst?

Below, read our minute-by-minute “Survivor 43” Episode 2 recap/live blog of “Lovable Curmudgeon” to find out what happened Wednesday, September 28, 2022 at 8:00 p.m. ET/PT. Then be sure to sound off in the comments section about your favorite castaways on CBS’s reality TV show, who annoys you the most and who you think will ultimately join the “Survivor” winners list and take home the $1 million grand prize.

SEEEverything to know about ‘Survivor 43’

Here are the current tribe breakdowns (click on each name to be brought to their individual profiles):

Keep refreshing/reloading this “Survivor 43” live blog for the most recent updates.

8:00 p.m. — “Previously on ‘Survivor’!” In the first episode, Jeff welcomed the 18 all-new castaways to Fiji for the start of their 26-day adventure. After Vesi won Reward, the tribes sent Dwight (Vesi), Gabler (Baka) and Karla (Coco) on a boat to play in their first risk/reward game. Dwight ended up losing his vote, while Gabler earned an immunity idol that would expire after his second tribal council. As the losers of the immunity challenge, Baka went to tribal council where they voted 5-to-1 to send home Morriah over Owen. Who will be voted out tonight?

8:01 p.m. — Baka returns to camp and Owen apologizes for being “anxious” at tribal council. He says the night was “wild” and that he wanted to “poop [his] pants.” Elie hopes the vote “solidifies trust” with the entire tribe. Gabler’s new goal is to find food, and he has his sights set on making “our ‘Survivor’ bacon,” which is just fried worms. Yum.

8:03 p.m. — At nighttime, a storm comes and disrupts their sleep. The next morning, the Baka fire is almost out aside from some embers. Sami calls it one of the worst nights he’s ever had in his 19-year life. Sami wants to come up with a new roof situation for the shelter. Gabler says the storm was “scary” and that the game might be more than he can handle. Owen is “worried” about Gabler not able to sustain himself for much longer.

8:05 p.m. — At the Vesi camp, Dwight and Jesse are searching for an advantage in the woods. They notice that there are three pairs on their tribes: Dwight and Jesse, Justine and Noelle, and Cody and Nneka. Jesse wants Dwight, aka his “island wife,” to join with Cody and Nneka to create a strong foursome. The only person Dwight hasn’t bonded with is Cody, so he’d rather join up with Justine and Noelle.

8:07 p.m. — Cody gets the spotlight now as he sees a big rock formation in the distance and immediately wants to jump off of it. Jesse says Cody comes off as crazy, but he’s really just fun. Cody sees the odds of winning as being pretty rough, but the odds of having fun are much better. He then jumps off the rock, screaming all the way down. Jesse admits the only person he can’t connect with is Justine, and he’s annoyed by her various ticks including her fear of spiders.

8:12 p.m. — It’s Day 4 on the Coco tribe and the group is doing stretches, led by Ryan. Karla sees some divides happening already, with the girls (Karla, Lindsay, Cassidy) wanting to bring in a fourth person (James) to create a majority. The other two, Geo and Ryan, believe that they have Karla on their side, but she is worried by their close bond.

8:14 p.m. — While searching for almonds, Geo reflects on his childhood in Peru and coming out to his parents as gay at age 18. His parents ended up disowning him and so he became homeless. Now, he is not going to let anyone get in his way of winning this game. Ryan feels like he can be himself around Geo, almost as if they’ve known each other for years.

8:16 p.m. — Back at Vesi, Noelle is struggling with her leg attachments while Cody talks about losing his childhood friend, Devon, due to cancer. Without going through that trauma, he wouldn’t have taken some of his risks in life. Cody mentions his butt tattoo again, “LIVIN,” and how that is truly his mantra.

8:18 p.m. — At the Baka camp, Owen is embracing his title as “Junior Deputy Waterboy.” His friends at home call a “lovable curmudgeon” — hey, that’s the name of the episode! He spills water on himself on his way back to camp and compares it to looking like he has pee pants. Meanwhile, his tribe mates are out searching for the idol, with Elie coming close to finding it.

8:20 p.m. — Elie and Jeanine are talking about who they want to vote out if they go to tribal council again. That is juxtaposed with the three guys comparing their water-logged feet and laughing with each other. The girls think it’s “weird” the guys haven’t even started talking game yet. What the girls don’t know is that Sami is proposing a guys’ alliance, where they’d have a 3-to-2 advantage over the girls. “We’d be stupid to lose to them,” he declares.

8:25 p.m. — It’s Day 5 and time for the second immunity challenge. For today’s comp, the players must dive into the ocean and swim to a cage, jump over the gate and release an enormous 400-pound snake. They have to release the snake and swim with it to the shore, where they have to untie ropes to reveal numbered tiles that will unlock puzzle pieces. In addition to immunity, the first tribe to finish wins a reward of a complete “Survivor” fishing kit, while the second tribe wins a smaller fishing set. Noelle and Karla sit out for Vesi and Coco, respectively.

8:30 p.m. — Baka is the first to release their snake, followed by Coco. Jeff is having fun noting how Cody looks like he is “riding the snake” lol. Nneka gets called out for not helping as much on the Vesi tribe. “You can’t rest on ‘Survivor’ ever,” Jeff says as Vesi seems to lose steam at the puzzle portion. Baka wins the challenge, earning immunity and the big fishing reward. Moments later, Coco comes in second place, winning immunity and the small fishing kit. That means Vesi will go to tribal council.

8:40 p.m. — Back at camp, Vesi is moping around after losing their first challenge. “We got our butts kicked,” Cody proclaims. Cody tells Jesse that Nneka is “atrocious,” but she doesn’t seem to be in danger since she’s in their alliance. Justine and Noelle think that Nneka needs to go because of her poor performance in the competition. Nneka is “not surprised” her name has been thrown out so soon. She’s hoping her relationships can be counted on come tribal council.

8:45 p.m. — Baka celebrates their challenge victory. Since the tribe has only been eating coconuts, the fishing gear will definitely come in handy. Elie is tearful that she was able to do so well in the challenge, especially since she grew up dealing with ADHD and dyslexia. Later, Elie gives some advice on how to use the Hawaiian sling, but Gabler doesn’t seem to want to listen.

8:55 p.m. — Vesi is still in scrambling mode, with Justine trying to get Nneka out of the game. Since Dwight lost his vote last week, that now complicates things. Jesse and Cody think Justine is the biggest threat so they want to get her out. We see a flashback of Justine telling Jesse that she has a “good lying face” — yikes. Jesse tells Dwight that they’re in the “pineapple zone,” which means they can speak honestly with each other. Dwight isn’t too receptive at getting out Justine. She then comes up to them and calls out Jesse for not being entirely trustworthy.

9:00 p.m. — Cody wants to know how to spell “Justine” — yes, there’s an E at the end. He then starts walking through the jungle searching for the idol, even though it’s a “kiss of death” in the game. He’s about to give up when he sees a Beware Advantage resting in plain sight on a stump. Cody opens the parchment where he learns he has found an immunity idol bracelet. In order for the idol to gain power, he has to persuade all tribe members to give them their special beads that are attached to their bags. He can’t steal the beads, they must be willingly given to him. If he fails to acquire all the beads, he cannot vote at tribal council.

9:10 p.m. — It’s going to be “near impossible” for Cody to get the beads from anyone because they are all superfans of the show. He confesses everything to Jesse, who then tells Nneka what’s going on. In a masterful move, Cody decides to put his beads on his palm frond hat, and then asks for everyone else’s to help him make the hat more bedazzled. One by one, everyone gives their beads to Cody, with Noelle being the sole holdout; she has already made a bracelet out of her beads.

9:18 p.m. — Vesi arrives at tribal council for the first time. Cody is showing off his hat to Jeff and promises to help make a hat for whoever goes home. Justine tells Jeff that the tribe is separated into three pairs, and Jesse feigns proposing to Dwight to lock in their bromance. The topic switches to idols and advantages, and some people clearly have no idea what’s really going on behind the scenes.

9:25 p.m. — It’s time to vote. All six people go to the voting booth, but how many actually cast votes? Jeff tallies the votes and reads them aloud: Justine, Nneka, Cody, Justine … and there’s one more vote! In a flashback, we see that Cody was able to acquire the remaining beads in the nick of time. The fifth vote goes to Justine, so she is eliminated with three total votes. Dwight seems angry with Jesse about that decision and he says they’ll “talk later.”

NEXT WEEK — The Coco tribe is building a community until they “slit each other’s throats.” Dwight says his island marriage with Jesse is strained and that he’s sleeping on the couch. And Sami reveals to Gabler that Elie looked through his bag, which makes Elie his new #1 target.