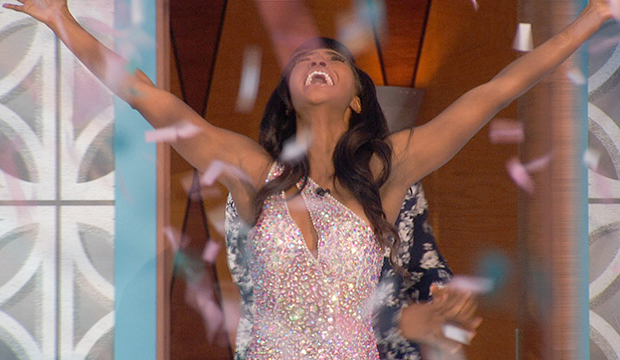 In one of the most improbable runs in “Big Brother” and reality TV history, Taylor Hale won “Big Brother 24” on Sunday, nearly three months after she was ostracized and targeted by the house in the very first week of the game. She also won America’s Favorite Houseguest, the first game winner to take home the $50,000 prize.

Entering the finale, Taylor was dejected after losing the first two parts of the final HOH to Matthew Turner and Monte Taylor, respectively, meaning she would have to rely on one of them to bring her to the final two. Monte won the third part and kept his promise to take her to the final two, where the former Miss Michigan crushed the jury Q&A and delivered a final speech for the ages, “challenging” the jury to vote for someone with resiliency and persistence instead of just comp wins. The jurors obliged with an 8-1 vote, giving Taylor $750,000 and putting her into the “BB” record books.

Here are all the ways Taylor made “BB” history with her win.

2. Taylor’s win occurred 20 years to the day of Danielle Reyes’ loss.
“BB” legend Danielle was the first Black houseguest to make the final two, which she achieved in Season 3. She lost by a vote of 9-1 to Lisa Donahue on Sept. 25, 2002, sparking fan outrage and the introduction of sequestered jury members. Taylor, who has cited Danielle as her favorite player and an inspiration, flipped the script by earning all but one jury vote.

3. Taylor is the first person to win “Big Brother” and America’s Favorite Houseguest in the same season.
Michael Bruner and Kyle Capener were the other top vote-getters for the fan-favorite prize. Thanks to her double wins, Taylor walked out of the house with the largest purse ever: $800,000.

5. Taylor is the third woman to beat a man in the finale.
She follows Nicole Franzel, who beat Paul Abrahamian in Season 18, and Kaycee Clark, who defeated Tyler Crispen in Season 20. Nicole and Kaycee both won by a vote of 5-4, so Taylor has the largest margin of victory.

6. Taylor is the second person to win the game without winning any part of the final HOH.
Maggie Ausburn overcame that deficit in Season 6, beating Ivette Corredero.

7. Taylor is the first person to win the game after being on the block on the first eviction night.
Taylor was a renom after Michael used the Veto on himself way back in Week 1. She and Terrance Higgins both survived after Paloma Aguilar withdrew and the eviction was canceled. Season 17 champ Steve Moses comes the next closest as he was an initial nominee in Week 1, but he took himself off the block with the Veto.

8. Taylor holds the record as the winner with the most times on the block.
She was nominated six times and faced eviction six times. The previous record was five.