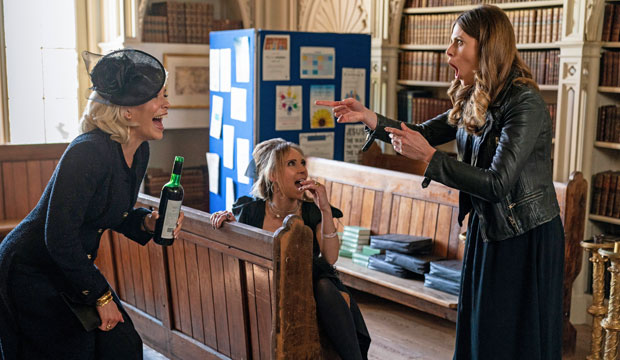 “Ted Lasso” is the reigning Emmy champ for Best Comedy Series, but the competition could be drastically different in 2022 with the return of shows like “Barry,” “The Marvelous Mrs. Maisel,” and “Atlanta.” Nevertheless, the Apple TV+ series has 37 entries across the Emmy ballots. Scroll down to see all the “Ted Lasso” Emmy submissions below.

The show about an American football coach who travels to the UK to head a struggling soccer team won three acting prizes last year: Best Comedy Actor (Jason Sudeikis), Best Comedy Supporting Actress (Hannah Waddingham), and Best Comedy Supporting Actor (Brett Goldstein). That was a clean sweep of its eligible acting rac es since the show entered no leading actresses for consideration. That’s the case again this year. Sudeikis, Waddingham, and Goldstein are up for consideration again, as are all the other actors who received nominations in 2021: supporting actress Juno Temple and supporting actors Brendan Hunt, Nick Mohammed, and Jeremy Swift.

The show didn’t win Best Comedy Directing or Best Comedy Writing last year — both of those awards went to “Hacks” — but it did receive two for writing and three for directing, which perhaps split enough votes to open the door for the double “Hacks” victories. “Lasso” has multiple submissions in both categories again this year: two for writing (“No Weddings and a Funeral” and “Rainbow”) and four for directing (“No Weddings” and “Rainbow,” plus “Beard After Hours” and “Inverting the Pyramid of Success”). Of those, “No Weddings” is by far the most represented episode for the show. Focusing on a tragic loss for Rebecca (Waddingham), it’s submitted for consideration nine times, including for its picture editing, a category the show won at Creative Arts last year.

What do you think of the actors and episodes “Ted Lasso” put forward? And how many of its submissions will turn into nominations and wins? Comment below, and join the discussion on this and more here in our forums.

Best Writing (Comedy)
“No Weddings and a Funeral”
“Rainbow”

Best Cinematography (Single-Camera Series, Half Hour)
“Beard After Hours”
“No Weddings and a Funeral”

Best Hairstyling (Contemporary)
“No Weddings and a Funeral”

Best Music Composition (Series)
“No Weddings and a Funeral”

Best Music Supervision
“No Weddings and a Funeral”