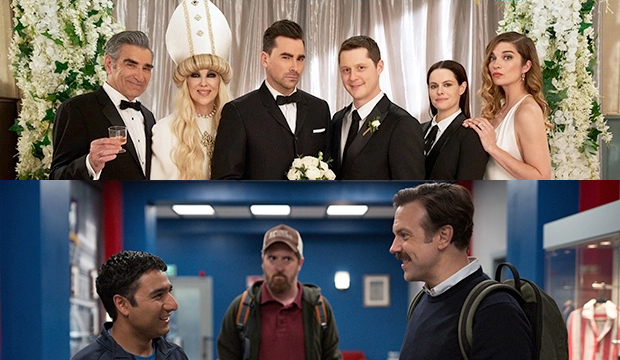 Remember a little show called “Schitt’s Creek“? That heart-warming Canadian comedy absolutely dominated the 2021 awards cycle, winning Emmys, Golden Globes and, yes, SAG Awards for its heralded final season. With “Creek” no longer eligible, “Ted Lasso” is the odds-on front-runner to claim the comedy ensemble prize at this year’s Screen Actors Guild Awards. In fact, Gold Derby’s pundits are nearly unanimous, with all but two Experts, every Editor, every Top 24 User and every All Star User predicting a winning goal for the Apple TV Plus series.

At last year’s kudos, “Schitt’s Creek” took home SAG Awards for comedy ensemble and comedy actress for Catherine O’Hara (beating her co-star Annie Murphy). Over in the comedy actor race, father-son duo Eugene Levy and Dan Levy both lost the statuette to “Ted Lasso’s” Jason Sudeikis. The Pop laffer told the story of a rich family who lost everything and moved to a tiny, blue-collar town in the middle of nowhere. It was infamously ignored at American awards shows until the bitter end, after reruns were made available on Netflix and voters binged it in its entirety.

Guild members understandably got swept up in the “Creek” craze, which explains why the first season of “Ted Lasso” lost the ensemble prize (despite winning top honors at the Emmys and Critics Choice). However, that shouldn’t be the case this year. Not only did “Ted Lasso” return to the cast lineup for Season 2, but it quadrupled its number of individual nominations. Sudeikis is now joined by Brett Goldstein in comedy actor, while Hannah Waddingham and Juno Temple both compete in comedy actress. In all, “Ted Lasso’s” five bids tied it with “Succession” as the most nominated TV shows of the year.

According to Gold Derby predictions, “Ted Lasso” has leading 16/5 odds to win the ensemble race, far ahead of second place contender “Hacks” (39/10), plus “Only Murders in the Building” (4/1), “The Great” (9/2) and “The Kominsky Method” (9/2). The second season of the Apple hit was much buzzier than the first, as even more viewers tuned in to see the titular coach and his quirky AFC Richmond team members. The only Experts not forecasting “Ted Lasso” to triumph are Tim Gray (he’s picking “Hacks”) and Matthew Jacobs (he’s going with “Only Murders”).

As for comedy actor, Sudeikis has leading odds to win for the second consecutive time. Besides Goldstein, his other co-nominees are Steve Martin and Martin Short of “Only Murders in the Building” and Michael Douglas of “The Kominsky Method.” Over in comedy actress, Waddingham and Temple face off against category leader Jean Smart (“Hacks”), plus Elle Fanning (“The Great”) and Sandra Oh (“The Chair”).