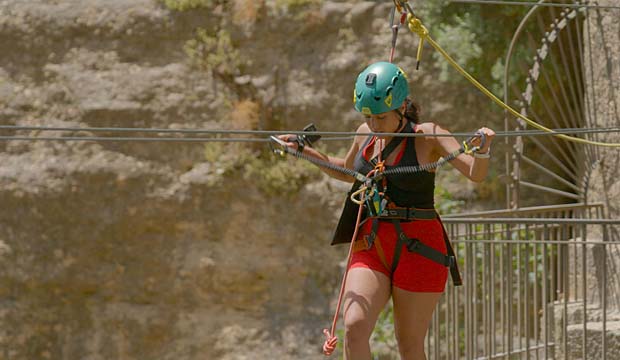 Tonight on “The Amazing Race,” teams continue the megaleg in Ronda, Spain, where they must choose to build an arch brick by brick or dress for success. This episode titled “Don’t Look Down” airs Wednesday, November 23 at 9:00 p.m. ET/PT on CBS. Follow along with our live blog below.

Below, check out our minute-by-minute blog of Season 34, Episode 10.

9:00 p.m. — Previously on “The Amazing Race”! In Episode 9, six teams continued the race for $1 million. A megaleg began in Malaga, Spain, where racers became grill masters and braved the rough waters. In the end it was “Big Brother” couple Derek & Claire were in the lead while brothers Marcus & Michael were in the back. Tonight they’ll finish this megaleg and one team will be eliminated.

9:05 p.m. — Derek & Claire are off to the second half of the megaleg. Teams will drive themselves to Ronda, Spain to find their next clue in an ancient bridge. Audrey & David are in second place, hoping to chase down the leaders and win their first leg. Meanwhile, Derek & Claire are off to a rough start. They took a wrong and ended up in some residential area and stuck on a narrow road. Eventually they get themselves out and hit the road.

9:10 p.m. — Molly & Emily finish the fish fry and begin the second half of the megaleg in fourth place. Meanwhile, after a 90-minute drive, it’s Luis & Michelle who jump from third to first place and arrive at the Detour first. They have two options here. In “Bend Over Backwards,” teams will build a brick archway. In “Dress for Success,” teams must find all accessories needed to properly dress a flamenco dancer. Luis & Michelle choose “Dress for Success.”

9:20 p.m. — Marcus & Michael have officially hit the road, so everyone is on the second half of the megaleg. Luis & Michelle struggle to dress their flamenco dancer properly while Aubrey & David and Derek & Claire arrive at the same challenge. Finally, Luis realizes the red shawl on their dancer had slightly different details than the model they were replicating. Bingo! Luis & Michelle complete the Detour and head to the Roadblock at Paseo de Kazunori Yamauchi in first place. Behind them, Derek & Claire and Aubrey & David have formed an alliance and are working together to stay ahead of the two teams behind them.

9:30 p.m. — Luis & Michelle arrive at the Roadblock. In “Who’s Been Paying Attention?”, one team member will balance on a tight rope and cross a high wire. When they cross, they have to remember the correct flag correlating with their last clue and bring it back. Meanwhile, Marcus & Michael have arrived at the Detour in last place and become the first team to choose “Bend Over Backwards.” We will see if they benefit from that choice or if it comes back to bite them. Molly & Emily are lost in the streets of Ronda in search of the flamenco dancers.

9:45 p.m. — Luis & Michelle have finished the Roadblock before any other teams arrive. They’ll head to the pit stop for this megaleg at Mirador de Ronda. They arrive with ease and finish in first place for this megaleg. They won a five-night trip for two to Tokyo. Back at the Detour, Marcus & Michael fail their first attempt at building an arch. Up at the Roadblock, Aubrey and Claire are both terrified on the tightrope, but they pull it together and cross. They’re not sure they’ve guessed the correct flag, but they have and won’t need to repeat the task. Both teams now race to the pit stop, but not before Claire has an epic meltdown when the emotions of being up so high finally hit her. Aubrey & David hit the pit stop in second place, followed by Derek & Claire in third.

10:00 p.m. — It is now a race of the siblings to the finish line. Molly & Emily finish the Detour before Marcus & Michael, but it’s close. Or at least it’s edited to look close. Next, Emily & Molly make quick work of the Roadblock and head to the pit stop. They arrive successfully, eliminating brothers Marcus & Michael. All of the teams will be relieved these two are out of the race. Marcus & Michael were grateful for the time they were able to spend together on the race. That’s a wrap for this week!