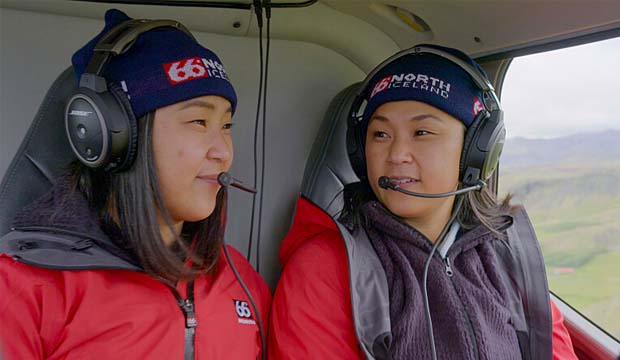 Tonight on “The Amazing Race,” the final four teams race through Iceland to clinch a spot in the finale and a chance to win the $1 million prize. This episode titled “How Am I Going to Survive This?” airs Wednesday, November 30 at 9:00 p.m. ET/PT on CBS. Follow along with our live blog below.

SEE ‘The Amazing Race’s’ Marcus: ‘Whoever wins probably should send Michael and me a thank you’

Below, check out our minute-by-minute blog of Season 34, Episode 11.

9:00 p.m. — Previously on “The Amazing Race”! In Episode 10, five teams continued the race for $1 million. A megaleg concluded with Luis & Michelle out front while brothers Marcus & Michael were eliminated. Tonight one more team is eliminated just before the grand finale. Let’s go!

9:07 p.m. — All teams are now flying 2,000 miles from Spain to Iceland. The final four teams board helicopters to take them to the start of this leg. A spot in the finale on the line. The views look incredible. At the start line, Luis & Michelle and Aubrey & David will head out first. Teams will begin their adventure at Solheimajokull Ice Climb, climbing a glacier, one at a time, to retrieve an Icelandic flag. Once both flags have been retrieved, they’ll get a clue. Luis & Michelle finish first, getting a clue that instructs them to drive to Fljotshigarfoss to find their next clue. Aubrey & David finish shortly after, with Derek & Claire and Molly & Emily just getting started.

9:15 p.m. — None of the teams had much trouble with the glacier, so not much time was gain or lost. All teams are now driving — or at least attempting to. These stick shift Land Rovers give both David and Luis some issues to start off, but they quickly get the hang of it. Molly & Emily can’t run because of the leg injury and are falling behind.

9:30 p.m. — Derek & Claire launch themselves into first place with superior navigation skills. The Roadblock is called “Who’s Feeling Misty-Eyed?” and teams will abseil 100 feet into a cave where they’ll find a clue. They then must jump, swim and slide through the rest of the course to reunite with their partner. It looks like a fun challenge. Molly & Emily arrive last, but no teams have left. As Molly takes on the challenge, Emily breaks down because her leg is in so much pain. While on the Roadblock, Luis passes by David, who is a terrible swimmer. Up at the front, Derek finishes first so he and Claire receive a clue instructing them to drive to Silfra Fissure in Thingvellir National Park. At the back of the pack, Molly is tracking down David and the twins are within striking distance. This race isn’t over yet!

9:45 p.m. — Derek & Claire and Luis & Michelle are basically tied by the time they reach the Route Info clue. Teams will dive into the Silfra Fissure for a snorkel and find 14 names of volcanoes and the years they erupted. Then they must recite the names and dates in front of a volcanologist to get their next clue. The water is frigid, so everyone has heavy gear on. If teams don’t remember them all, they must complete the swim again, which is no easy task. Derek is really struggling with the swim, but Emily is struggling with her leg, so it’s a toss-up which of these two teams will have a harder time. Meanwhile, Luis & Michelle hit a snag when they fail their first attempt. They’ll have to go back and complete the swim again, which technically puts them back in last place, for now. Derek & Claire finish the challenge in first place and are instructed to drive to the pit stop at Gullfoss Falls.

10:00 p.m. — Things get intense as Luis & Michelle, Molly & Emily and Aubrey & David are all in the exact same spot, trying to piece together the order of these volcanoes. Luis & Michelle complete the task and race towards the pit stop. David & Aubrey are wrong and must swim again. They are lucky that Molly & Emily must try again as well. David is having a really tough time with this swim. It’s tough to watch. Up at the front of the pack, Derek & Claire are thrilled to finish this leg in first place! They’ve won a five-night stay for two in London. Luis & Michelle finish in second place and earn a spot in the finale. Molly & Emily finish the challenge and head to the pit stop, but Aubrey & David are wrong again. And they’re not even close. David just can’t complete this swim again, so they take the penalty and seal their fate. David & Aubrey have been eliminated from the race.