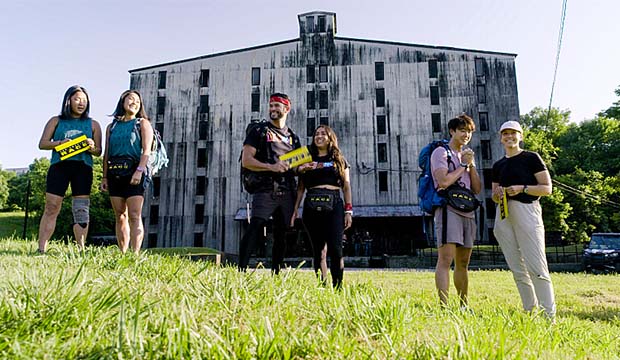 Tonight on “The Amazing Race,” the final three teams travel 3,000 miles to race through Nashville for the final showdown, where they must deliver guitars and play a giant floor piano to win the $1 million prize, on the season finale of the reality TV competition. This episode titled “The Only Leg That Matters” airs Wednesday, December 7 at 9:00 p.m. ET/PT on CBS. Follow along with our live blog below.

SEE ‘The Amazing Race’s’ Aubrey and David on taking the penalty: ‘I don’t think we would’ve changed anything’

The cast consists of brand new teams, but there are some familiar faces, including “Big Brother” showmance Derek Xiao and Claire Rehfuss who recently moved to Los Angeles together. Derek also recently competed on “The Challenge: USA” where he finished in 10th place among the men. In the season premiere, host Phil Keoghan announced there will be no non-elimination legs in this cycle.

Below, check out our minute-by-minute blog of Season 34, Episode 12.

9:00 p.m. — Previously on “The Amazing Race”! In Episode 11, four teams raced through Iceland to clinch a spot in the finale and a chance to win the $1 million prize. Ballroom dancers Aubrey & David were eliminated after Derek & Claire, Luis & Michelle and Molly & Emily beat them to the pit stop. Tonight the winners are crowned. Let’s go!

9:08 p.m. — The final three teams have arrived in Nashville for the final leg of the race. Everyone starts at the same time, so there are no advantages. For their first Route Info challenge called “Whiskey Business,” teams need to label and pack 30 whiskey bottles ready for shipment. Molly & Emily excel in their attention to detail and finish first, receiving their next clue. They will drive to the Korean Veterans Memorial Bridge to find their next clue. Derek & Clair finish second, with Luis & Michelle in third. It’s still a close race. Molly & Emily stop at a gas station for directions and Derek & Claire follow them. A couple minutes later Luis & Michelle show up and this race is dead even!

9:15 p.m. — Molly & Emily pass the parking sign, so Derek & Claire arrive to the clue box first. Luis & Michelle are second. In this Roadblock, teams will climb and rappel the bridge for a clue on a guitar pick. Emily & Molly arrive in third place and it appears as though everyone is within five minutes of each other. Derek finishes first with his clue, which instructs them to head to the Gibson Garage. Michelle struggled with the climb, allowing Emily to pass her. Next, thinking she had to wait for Emily to finish her rappel, Michelle just sat there at the top of the bridge doing nothing. Yikes! Finally she’s on her way and the race is on to catch Derek & Claire.

9:30 p.m. — Derek & Claire find random pedestrians who give them directions to the Gibson Garage. They arrive and get the next clue — in “Gibson Guitar Deliver,” teams need to deliver three prized instruments to musicians performing at different Honky-Tonks on lower Broadway. Meanwhile, Molly & Emily are lost and just driving aimlessly. Luis & Michelle arrive at Gibson, realizing they’ve passed the sisters and are right on Derek & Claire’s heels. Molly & Emily discover they went the wrong direction and have now turned around. They reach the Gibson Garage in last place.

9:45 p.m. — Derek & Claire are first to deliver all three of their guitars and receive tickets to the Nashville Municipal Auditorium. Once inside they receive their next clue — “Keys to Success.” Teams need to bring the sequence of notes of “The Amazing Race” theme to life using a giant floor piano. To get that sequence of notes, they’ll need to remember the chronological order of events they encountered throughout the race. Once complete, they’ll get their final clue sending them to the finish line. Derek is a piano player and is able to read the keys, so that’s how he and Claire memorize each note. Luis & Michelle arrive next. Michelle is confident in her memory, but neither she or Luis have any experience with instruments. Next Molly & Emily arrive. All teams are now at their own giant floor pianos, hoping to finish first. It’s not an easy task because the piano is huge and they only have 11 seconds to play all the notes.

10:00 p.m. — Luis & Michelle just realized the black keys on their piano also play notes, which sets them back a considerable amount of time. They’ve memorized just half the pictures. Before anyone else is even close, Derek & Claire have correctly finished this task and will race to the finish line at the Ryman. Molly & Emily finish next and chase after the “Big Brother” duo. They’re not fast enough and Derek & Claire have redeemed their “Big Brother” loss with a $1 million prize and the title of “The Amazing Race” champions for Season 34! Claire calls Derek “her rock” and Derek says Claire’s kind-heartedness has led the way. Molly & Emily arrive in second place and Luis & Michelle finish third. They maintain smiles and and good sportsmanship until the very end. It was a great final three. That’s a wrap for this season!