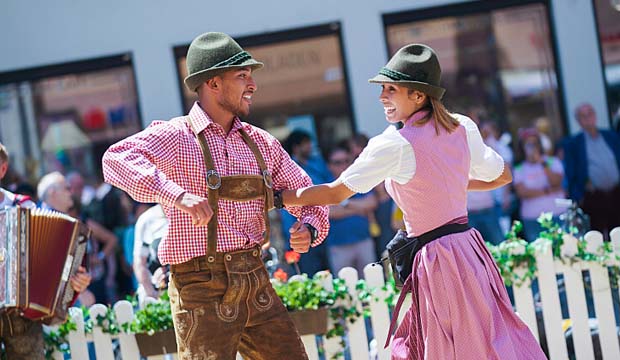 Season 34 of  “The Amazing Race” continues in Munich, Germany tonight. It’s the first time the Emmy-winning reality TV competition has started outside of the United States. Last week, host Phil Keoghan announced there will be no non-elimination legs in this cycle, so there’s no room for error! Season 34 Episode 2 titled “Patience, Is the New Me” airs Wednesday, September 28 at 9:30 p.m. ET/PT on CBS. Follow along with our live blog below.

The cast consists of brand new teams, but there are some familiar faces, including “Big Brother” showmance Derek Xiao and Claire Rehfuss who recently moved to Los Angeles together. Derek also recently competed on “The Challenge: USA” where he finished in 10th place among the men. Rex Ryan was an NFL coach for eight years (six with the New York Jets, two with the Buffalo Bills). He brought along his golf body, probation officer Tim Mann.

9:30 p.m. — Previously on “The Amazing Race”! In the Season 34 premiere, 12 teams embarked on an epic race around the world, kicking things off with a historic “scramble” in Munich, Germany. “Big Brother” couple Derek & Claire finished first. In the end, engaged couple Aastha & Nina couldn’t keep up and were eliminated from the race. Who be last to the pit stop tonight? It’s time to find out!

9:35 p.m. — Teams will depart in in groups this leg, based on the order they finished last week. In the first group are Claire & Derek, Glenda & Lumumba and Quinton & Mattie. Teams will drive 90 miles from Munich to Innsbruck, Austria. Glenda & Lumumba immediately head to a gas station for directions. Meanwhile, the other two teams are far less organized, frazzled with maps blowing across the sidewalk.

9:40 p.m. — Group 2 is unleashed 15 minutes behind and consists of Linton & Sharik, Molly & Emily, Marcus & Michael and Tim & Rex. An alliance (or at the very least a friendship) has developed between Tim & Rex and Marcus & Michael. Group 3 starts 15 minutes after Group 2 and consists of Abby & Will, Rich & Dom, Luis & Michelle and Aubrey & David. After driving for a while, Quinton & Mattie realize they’re looking for the wrong location! They thought they just had to find a building in Germany. They didn’t realize it was a 90 mile drive to their destination. Still, they remain optimistic because they had a 30 minute head start on Group 3.

9:50 p.m. — Teams reach the first Road Block called “Who Wants to Call in the Cows?” They’ll have to complete a yodeling task and show off their perfect pitch. Claire & Derek arrive first, but Marcus & Michael and Tim & Rex have caught up with them! Claire is tone deaf and Rex is dyslexic, so this challenge isn’t as easy as it looks. At the back of the pack, Luis & Michelle appear to be completely lost. They lost Abby & Will and went the wrong direction. Lucky for them, Quinton & Mattie have been riding the struggle bus as well.

10:10 p.m. — Marcus & Michael finish the Road Block in first place and race off in first place. They’ll now drive to Marktplatz in Innsbruck to find their next clue. The last couple of teams arrive at the Road Block, except for Quinton & Mattie. Those two are really far behind. Yikes! Glenda & Lumumba are the second to complete the task and they’re heading to the next clue, followed by Linton & Sharik, who have made up a lot of ground. Emily & Molly launch launch themselves into 4th place and Claire is starting to look defeated as she watches her lead get squandered. Meanwhile, Michael & Marcus reach the next clue box, which sends them to a “Bells Ringin'” Detour, which requires teams to follow a sheet of music and play seven notes using bells to ring out a traditional folk song. The other option in this Detour is “Partner Swingin’,” where teams must learn a choreographed combination of moves in time with music. The military brothers decide to ring some bells.

10:20 p.m. — Marcus & Michael decide to ring the bells and they begin this Detour in first place. Back at the Road Block, Abby & Will fly through the challenge, deflating Claire even further. “I feel horrible,” Claire says. She feels like she is letting Derek down. Even Rex has beaten her. Up at the Detour, Glenda & Lumumba have decided to dance, so it will be interesting to see if they pass the military brothers. I’m not sure which of these tasks seems easier.

10:30 p.m. — It’s official, Claire & Derek were the first ones to the Road Block and they’re the last ones out. Or so they think. What people don’t seem to realize is that Quinton & Mattie are completely off the grid. Their disastrous navigation skills could be what saves Claire & Derek. Eventually she finishes and they head towards the Detour in 10th place. They’re somewhat relieved to see Quinton & Maddie driving towards the Detour as they’re leaving. The “Big Brother” duo is confident in their map skills and they’re hoping to catch up to teams less road savvy.

10:45 p.m. — The Detour proves complicated and more teams arrive. The playing field is slowly evening out and it’s anyone’s race. On their fifth attempt, Marcus & Michael finally finish the bells challenge. They have no idea they’re in first place because everyone else (so far) has chosen to dance. The military brothers will now head to the next pit stop at the Hofburg Imperial Palace. Next to head towards the pit stop are Glenda & Lumumba, who just finished their dance routine. The race is on for the finish line. Full order of results can be seen below.

11:00 p.m. — Marcus & Michael have finished in first place! They have won Expedia reward points good for five nights for two to Lima, Peru. Back at the Detour, navigation skills have hurt Tim & Rex. They’ve fallen back while Derek & Claire have cruised through the bell-ringing challenge and finished in fourth place! Incredible comeback. Rich & Dom arrive in 8th place, but the clue clearly states they need to be wearing their hat. They have to go back. Oh no! They go back to check the car. Thankfully they find their hat and return in 9th place. The rest of the teams trickle in, but the duo finishing in last place and getting eliminated from the race is Tim & Rex.