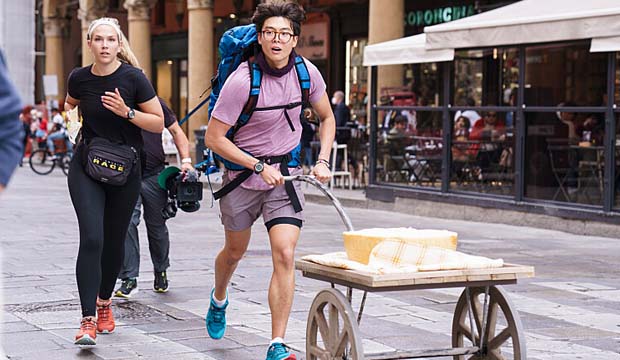 Tonight teams start a Megaleg in Bologna, Italy, where they must cart an 88-pound wheel of parmigiano cheese and build a Ducati Panigale V4 motorcycle. Season 34 Episode 3 titled “It’s All in the Details” airs Wednesday, October 5 at 9:00 p.m. ET/PT on CBS. Follow along with our live blog below.

9:00 p.m. — Previously on “The Amazing Race”! In the Episode 2 11 teams continued in the race for $1 million. After driving to Innsbruck, Austria, military brothers Michael & Marcus took over the lead while their closest allies, Tim & Rex were eliminated. Who be last to the pit stop tonight? It’s time to find out!

9:05 p.m. — All teams are now boarding “The Amazing Race” charter plane and heading to Bologna, Italy. After touching down, teams will begin a Megaleg: Two Detours, two Road Blocks, two cities. At the end of it all, another team will be eliminated. Group 1 departs first — Michael & Marcus and Glenda & Lumumba. They will drive to Arco del Meloncello to find their next clue. The brothers quickly arrive first and get their options for tonight’s first Detour. In “Head of the Class,” teams will listen to a 16th century lecture before traveling to the courtyard to take a timed exam. They must identify 16 bones, muscles and organs in under 90 seconds. If they fail, they must go back to class. In “The Big Cheese,” teams will wheel heavy discs of cheese to a professional parmigiano cheese cutter. Then they must deliver two halves to different restaurants and bring back a receipt. Michael & Marcus select “The Big Cheese.” Glenda & Lumumba choose “Head of the Class.”

9:10 p.m. — Group 2 departs 15 minutes later and consists of Linton & Sharik, Derek & Claire, Luis & Michelle and Abby & Will. As they arrive, they split off into different Detours and catch up to Glenda & Lumumba, who are lost and currently wandering the streets of Bologna on foot. Meanwhile Group 3 is unleashed 15 minutes after Group 2 and consists of the remaining teams: Molly & Emily, Aubrey & David, Rich & Dom and Quinton & Mattie. Multiple teams have issues with the stick shifts, which everyone should have learned how to do before leaving for the race. It’s “Amazing Race” 101. You’re gonna drive a stick! Up at the front, Michael & Marcus receive their block of cheese and get moving. These brothers are strong and don’t expect to encounter any problems with this Detour. Meanwhile, Glenda & Lumumba are still lost and asking locals for directions. Teams gradually pass them by.

9:20 p.m. — Linton & Sharik are first to arrive for the “Head of the Class” Detour. Sharik immediately regrets their decision and calls it “overwhelming” to memorize so much anatomy. Meanwhile, Glenda & Lumumba just realized they were supposed to drive to the Detour and they’ve been walking all over the place. A classic case of not carefully reading the clue. There’s still plenty of time to catch up. Marcus & Michael have completed the first Detour and receive their next clue in first place. They must drive to the Ducati factory to find their next clue. Back at the anatomy test, Linton & Sharik have failed their first attempt. They join class once again, this time joined by Abby & Will and Quinton & Mattie. Their lead is squandered.

9:25 p.m. — If you are in the medical field the “Head of the Class” Detour would likely be a breeze, but with the teams involved, rolling cheese seems like the easier route to take. Luis & Michelle finish their cheese delivery and catapult themselves from 5th to 2nd place. Near the back of the pack, Emily & Molly and Rich & Dom are still struggling with their manual transmission vehicles. They may be giving Glenda & Lumumba the break they needed. Meanwhile, Derek & Claire finish their Detour in 3rd place, passing Linton & Sharik. Three teams are now taking the anatomy quiz — all of them fail except Quinton & Mattie, thanks to Mattie’s college anatomy class. The cheerleaders have now gone from 10th to 4th place.

9:30 p.m. — Rich & Dom, the motivational speakers, are having trouble staying motivated. They’re lost and Rich is an awful driver. They stop for directions and get put on the right path. Meanwhile, Emily & Molly fly through the “Head of the Class” Detour, moving into 5th place, directly followed by Abby & Will in 6th. Meanwhile, Michael & Marcus have arrived at the Road Block, where they must assemble the wheels and breaks, then have their work approved by mechanics before installing the body panels. When the lead mechanic says that it’s “race ready,” they’ll get their next clue. Michael will complete this challenge. These brothers are actually into motorcycles and own a couple themselves, so this should be no problem.

9:40 p.m. — Glenda & Lumumba have finally arrived at the first Detour and are relieved to see other teams still there. Their celebration is short-lived, however, when Aubrey & David and Linton & Sharik quickly depart in 7th and 8th place. What Glenda & Lumumba don’t know is that Rich & Dom are still completely lost in Bologna. Meanwhile, Luis & Michelle miss an exit or something and Derek & Claire arrive at the Road Block in 2nd place. It’s not a major crisis, the married couple quickly finds their way back in the right direction. Claire will be assembling the motorcycle for her and Derek, hoping she doesn’t have a disastrous moment like she did yodeling last week. Meanwhile, Rich & Dom arrive at the Detour while Glenda & Lumumba are still there. It’s definitely not over for either team! Eight out of 10 teams are now at the Road Block.

9:50 p.m. — Glenda & Lumumba and Rich & Dom have finally finished the Detour at the same time. They race forward, trying to avoid last place. Meanwhile, David is a helicopter mechanic and builds cars for fun, so he’s loving this Road Block. Emily is shockingly good at building motorcycles and making a lot of progress for herself and her sister. But up at the front of the pack, Michael & Marcus have completed this Road Block first, even if they lost a bit of their lead. The Megaleg continues with them driving to Villa Bardini in Florence, Italy for their next Road Block clue. Molly & Emily head out in 2nd place followed by Aubrey & David in 3rd, Luis & Michelle in 4th and Linton & Sharik in 5th. It’s fascinating to watch how different challenges impact teams. Derek & Claire got there in 2nd place and Claire is reliving her yodeling nightmares.

10:00 p.m. — Claire finally gets the thumbs up so she and Derek head out in 6th place, quickly followed by Abby & Will and Quinton & Mattie. The last to arrive are now still in last place: Glenda & Lumumba and Rich & Dom. Eventually Rich finishes his motorcycle, but there’s still an entire leg left in this Megaleg! Nobody should be giving up. The teams are now racing to Florence…to be continued.