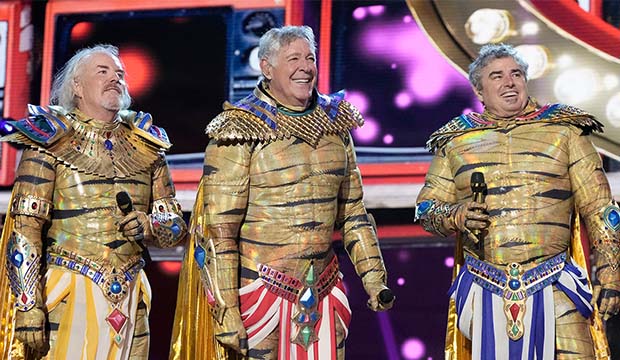 A trio of iconic television stars was unmasked during the appropriately titled “TV Theme Night” episode of “The Masked Singer” on Wednesday. Barry Williams, Christopher Knight and Mike Lookinland who played Greg, Peter and Bobby on “The Brady Bunch” were parading around as Mummies while singing “The Monkees” theme. Panelist Nicole Scherzinger was the first to unravel the clues that gave them away and Robin Thicke piggybacked on the idea.

“It was thrilling to be together performing,” Williams told Nick Cannon during their unmasked interview. “We haven’t performed together like this since the ‘Brady’ days, originally. Being here was such fun. The audience has been terrific and the judges are very sharp. You’re very sharp!”

Before exiting the stage they delighted the crowd one more time with a performance of their classic, “It’s a Sunshine Day.”

In the Mummies clue package they revealed they were coming to us “live in living color” and said we watched them grow up, and they may even feel like our family. Noting sibling bonds are the strongest, the trio has learned a lot from each other. Visual clues included blueprints to a house that say “Iconic,” likely referencing Mike Brady’s job as an architect. A “Tiger Pop” magazine let viewers know they were watching teen heartthrobs on stage.

Mummies were the sixth act eliminated from Season 8 of “The Masked Singer.” Their unmasking was preceded by William Shatner as Knight, Eric Idle as Hedgehog, Chris Kirkpatrick as Hummingbird, Jeff Dunham as Pi-Rat and Montell Jordan as Panther.