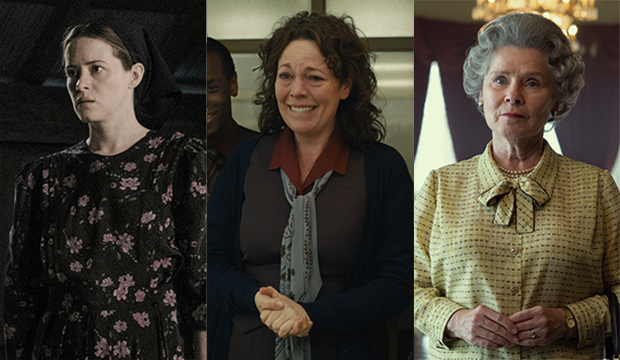 The queen lives! Well, sort of. The three talented actresses who’ve portrayed (or will portray) Queen Elizabeth II on Netflix’s award-winning royal drama “The Crown” are set to be everywhere this awards season.

Claire Foy, who played the late monarch in the first two seasons of the historical (but not always historically accurate) drama series and won two Emmys (lead actress, 2018; guest actress, 2021), two Screen Actors Guild Awards (2017, 2018) and a Golden Globe (2017) for her performance, stars in Sarah Polley’s newest film, “Women Talking.” Adapted from Miriam Toews’ 2018 novel of the same name, the movie follows a group of women from an isolated religious community as they grapple with the realization that they’ve been repeatedly drugged and raped. Slated for a limited theatrical release in December, it has been making the festival rounds since premiering at the Telluride Film Festival in early September. Critics have praised Polley’s direction, as well as the performances at the heart of the film. Currently, Foy and co-star Jessie Buckley lead Gold Derby’s supporting actress Oscar odds.

But “Women Talking” isn’t Foy’s only project this awards season. She is also eligible for her small-screen work as Margaret Campbell, Duchess of Argyll on the Amazon Prime limited series “A Very British Scandal” opposite Paul Bettany. She’s currently just outside the top 20 for Best TV Movie/Mini Actress in the SAG Awards odds and in 11th place in the Globe rankings.

Elsewhere, Olivia Colman, who took over from Foy for Seasons 3 and 4 of “The Crown” and also won an Emmy (2021) and Golden Globe (2020) for her performance as the beloved queen, will next be seen in Sam Mendes’ movie “Empire of Light,” an ode to cinema via romantic drama. While the film has received mixed reviews since its debut at Telluride, Colman’s performance has been praised and currently has her sitting in fifth place in Gold Derby’s Oscar odds for Best Actress. And as if that wasn’t enough, Colman also lends her voice to the upcoming “Puss in Boots: The Last Wish,” which means she could star in back-to-back Best Animated Feature nominees after being part of the ensemble voice cast for “The Mitchells vs. the Machines” (2021).

Lastly, Imelda Staunton, who can be seen portraying Queen Elizabeth II beginning Nov. 9 in Season 5 of “The Crown,” is already leading Gold Derby’s combined odds for Best TV Drama Actress at the SAG Awards and Golden Globes. Although we’ve yet to see her in character as the longest-ever reigning British monarch, she’s already ahead of recent Emmy winners Zendaya (“Euphoria”) and Julia Garner (“Ozark”) in the SAG Awards’ combined category. This speaks not only to Staunton’s pedigree as an actress, but also the show’s previous awards successes.

If Foy succeeds in landing her maiden Oscar bid for her excellent performance in “Women Talking,” all three actresses who’ve portrayed Queen Elizabeth II on “The Crown” will have been Oscar nominees. Staunton was nominated for Best Actress for her performance in “Vera Drake” (2004), while Colman took home the Academy Award for Best Actress for her work in “The Favourite” (2018). She was also nominated for Best Supporting Actress for “The Father” (2020) and Best Actress for “The Lost Daughter” (2021). Regardless of the outcome of this year’s Oscars, though, it’s safe to say all three women are now fit to be deemed acting royalty.