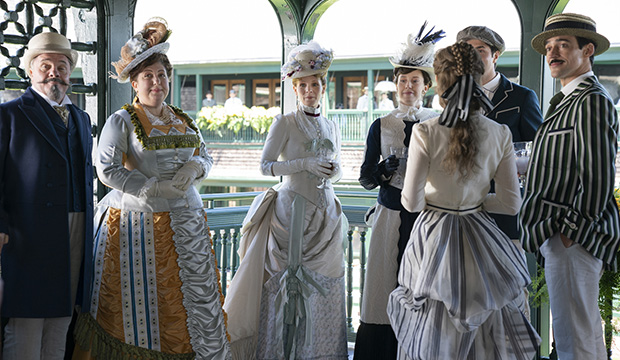 In the first season of HBO’s “The Gilded Age,” nouveau riche character Bertha Russell (Carrie Coon), who is modeled after the real Ava Vanderbilt, ascends from an underestimated newcomer in 1882 Old New York to an impressive force amongst the “old guard” of society. Her fictional rise just might foreshadow the path of this Julian Fellowes series at the Emmys from an underdog to a strong above- and below-the-line contender.

According to our current combined odds, “The Gilded Age” starts off as an underrated entry. The series narrowly misses our top 20 Best Drama Series contenders. Coon sits two spots outside of our Best Drama Actress top 10, Christine Baranski and Cynthia Nixon sit in 13th and 25th places in Best Drama Supporting Actress, respectively, and Best Drama Actor hopeful Morgan Spector trails even further behind. Despite these current positions, there are a number of reasons why our Experts, editors, and users should rethink their initial assessments of the series.

SEE And just like that, Cynthia Nixon could make her Emmy comeback with ‘The Gilded Age’

In the weeks leading up to the “Gilded Age” premiere, pundits raised concerns about what the show’s unusual Monday night time slot might mean for HBO’s confidence in the series. The network’s more coveted Sunday night perches this spring went to the Emmy-winning “Euphoria” and Adam McKay’s new series “Winning Time: The Rise of the Lakers Dynasty.” Those naysayers needn’t have worried, though, as Fellowes’ reputation and the strength of the ensemble cast immediately drew eyeballs to the show. The season finale attracted a series high 1.6 million viewers on HBO and HBO Max over a 24-hour period. For context, that number is only 100,000 viewers shy of the Season 3 finale of HBO’s Emmy-winning crown jewel “Succession,” which conveys just how many people (and potential Emmy voters) the show has already reached.

The pedigree behind the camera certainly bodes well for its Emmy prospects. The first season of Fellowes’ “Downton Abbey,” which at the time competing as a limited series, performed extraordinary well, earning 11 nominations and taking home six prizes. Those nominations were across an array of categories, from the top miniseries prize and acting (Elizabeth McGovern, Maggie Smith) to writing and directing, cinematography, costume design, art direction, sound and single-camera picture editing, and casting.

“The Gilded Age” has the potential to earn bids in many of those technical and craft categories as an abundantly lavish period piece. Costume designer Kasia Walicka-Maimone, for example, crafted thousands of intricate looks for the show’s affluent (and expansive) main and recurring cast, plus its deep bench of background performers. Bob Shaw contributed the equally dazzling production design, recreating Old New York on a soundstage in Brooklyn, transforming the streets of Troy, N.Y., and even borrowing some of The Breakers mansions in Rhode Island; Shaw earned three Emmy nominations for “The Sopranos” and has two victories for “Mad Men” and “Boardwalk Empire.” Emmy nominees Rupert Gregson-Williams and Harry Gregson-Williams could also contend for their main title theme. With strength in these and other below-the-line categories, the support of the crafts could bolster the show’s chances for a freshman drama series bid.

The caliber of its cast certainly will not hurt either. With the unlimited ballot for the nominations round, voters can check off as many of the “Gilded Age” performers as they’d like. Many of them are already familiar to Primetime Emmy voters: Baranski has 15 career nominations and a win for “Cybill”; Nixon has two trophies from her five bids; Coon has a bid for the third installment of “Fargo”; recurring stars Audra McDonald and Debra Monk both have a trophy; and Kelli O’Hara, Nathan Lane and Jeanne Tripplehorn all have nominations. The freedom to support an unlimited number of the cast may also benefit the show’s breakout stars like Denée Benton, a Tony Award nominee who emerged as the heart of the series as an aspiring Black writer who makes advances in her career while trying to unravel a mystery from her past. If actors are taken with the show, “The Gilded Age” could easily outperform expectations come July.

Emmy odds for Best Drama Supporting Actress
Who will be nominated?