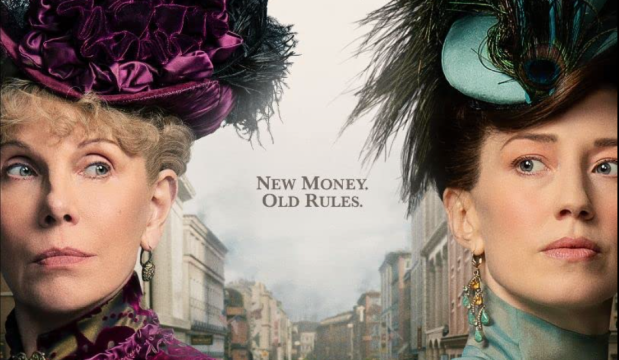 Seven years after Julian Fellowes’ Emmy-winning “Downton Abbey” wrapped its original series run, the masterful writer of period dramas returns to the small screen with another lavish series, HBO’s “The Gilded Age.” The sprawling tale of 1882 New York City centers on the brewing conflict between Christine Baranski’s Agnes van Rhijn, a descendent of moneyed, old New York, and Carrie Coon’s Bertha Russell, the wife of a robber baron and the face of the nouveau riche. The first season of “The Gilded Age” premieres on Jan. 24.

By most accounts, the Oscar- and Emmy-winning Fellowes has penned another smashing period piece. As of this writing, the series has a 72 score on Metacritic, indicating “generally favorable reviews.” The first season is also certified fresh on Rotten Tomatoes with a 84% rating, with their critical consensus reading, “Julian Fellowes’ brand of upstairs, downstairs intrigue makes a seamless transatlantic transition in ‘The Gilded Age,’ with an outstanding cast making the travails of the rich a compelling watch.”

Most reviewers deem “The Gilded Age” “mostly frothy and light,” built around a “delicious conflict” and stuffed with Fellowes’ trademark “sharp-tongued dialogue.” The scope of the series and its sprawling cast is “more ambitious than anything Fellowes tried” in the past, but feels “at times more ungainly, too.” Out of the starry ensemble, Baranski “steals the show,” playing Agnes’ “droll quips perfectly” and with “impeccable execution” in a “vibrant, knowing performance.” Cynthia Nixon is “naturally sympathetic” as Agnes’ restrained sister Ada Brook, and together she and Baranski “are magnetic.” Coon is “ferocious” and as “remarkable as she is versatile,” and Denée Benton plays Agnes’ industrious new secretary Peggy with “subtly displayed passion.” Overall, the series is “lavishly made” and “eminently watchable,” if not perhaps “uninspired.”

“The Gilded Age” features one of the starriest ensembles in recent memory, with a cast bursting at the seams with Tony and Emmy Awards. Baranski has an Emmy and two Tonys, and she recently earned a Critics Choice Award nomination for her performance on the fifth season of Paramount+’s “The Good Fight.” Not to be outdone, Nixon has two Emmys and two Tonys. The cast features at least two other Emmy-winners in guest stars Audra McDonald and Debra Monk and features at least 14 other Tony-nominees. Louisa Jacobson and Morgan Spector round out the series regular cast.

See excerpts from some of the critics’ reviews below, and join in the discussion of “The Gilded Age” and more with your fellow TV fans and industry insiders in our forums.

Judy Berman (Time): “‘The Gilded Age’ kicks off Fellowes’ Edith Wharton era. It applies his addictive formula to a landscape that extends beyond the walls of one house, infusing big-budge costume drama with soapy plotting. At its best, it sheds light on how the social lives of Manhattan’s most prominent families influence their patriarch’s world-historical careers. But for the most part, it entertains without illuminating.”

Daniel D’Addario (Variety): “In its early going, ‘The Gilded Age’ struggles in one area—dialogue—but excels in enough others to keep viewers of the right cast of mind engaged. To borrow a phrase, the show’s ambition has written a check that, thanks to elegant acting and careful attention to detail, ‘The Gilded Age’ can cash.”

Caryn James (BBC): “While ‘The Gilded Age’ and ‘Downton’ have similar appeal – both are character-rich, colourfully-costumed dramas of money and manners – they exist in worlds apart, highlighting the differences between the British and US class systems,” with “Gilded Age” featuring “less warmth and melodrama that ‘Downton’ but more piercing social observations.”

Richard Lawson (Vanity Fair): “‘The Gilded Age’ is not seeking to paint a horrifying portrait of American plutocracy, nor is it offering any sort of searching treatise on the inequalities of racism, sexism, and homophobia. Those social ills are in there—more than window dressing, less than focus—but the main drive or intent of ‘The Gilded Age’ is to titillate like a good gossip session might.”

Ben Travers (IndieWire) calls the series “gentle, blissful entertainment,” writing, “The tasteful tale of class conflict at the start of America’s Gilded Age relishes its expansive production, stunning wardrobes, and talented ensemble as thoroughly as it preserves its respectful atmosphere.”