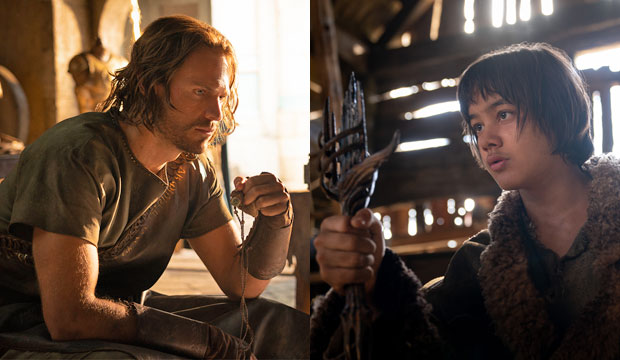 A central story thread in Amazon’s “The Lord of the Rings: The Rings of Power” is Galadriel’s (Morfydd Clark) quest to purge the evil Sauron from Middle Earth. The tale takes place during the Second Age of J.R.R. Tolkien’s writings, where most inhabitants of the continent believe Sauron to be dead. Anyone who has seen or read “The Lord of the Rings” trilogy knows that Sauron has not been defeated yet, and will indeed rise to power again.

With the Dark Lord in hiding during the Second Age, the series has been dropping plenty of hints that we have already seen Sauron on our screens. Tolkien describes Sauron as taking on a “fair” form during this age, allowing him to go unnoticed as he regains power. The following characters are the most compelling Sauron suspects, listed from most to least likely.

SEE ‘The Lord of the Rings: The Rings of Power’ drops new trailer

Halbrand
“The Rings of Power” is having so much fun giving Halbrand (Charlie Vickers) ties to Sauron that if he isn’t revealed to be the villain, the writers will have some serious explaining to do. Halbrand frequently refers to having a dark past where he did something terrible, he is cunning and persuasive, he is prone to violent outbursts, and he became obsessed with joining the smith guild in Numenor to gain access to their forge. All extremely Sauron-y traits. And remember when Gil-Galad foresaw that Galadriel’s quest to defeat Sauron may inadvertently lead to his rise in power? It would be a deliciously tragic twist if Galadriel, blinded by her rage, was unable to sense the Dark Lord right beside her, and helps escort him back to Middle Earth. It’s possible I’m thinking too big here. There’s an equally strong chance that Halbrand is eventually installed as a king of Man only to succumb to a ring of power and transform into The Witch King. But the show clearly has plans for this original character.

The Stranger
Despite Nori (Markella Kavenagh) doing her best to affirm that The Stranger (Daniel Weyman) is “here to help,” the mystery figure ends up hurting the Harfoot during a magical healing session. That’s the second instance of him causing harm after he inadvertently killed that family of fireflies (though he did heroically save the Harfoots from a pack of hungry wolves). If The Stranger is Sauron’s mortal form, I do find it odd how confused this figure is. One would think Sauron would reappear in Middle Earth just as sharp and conniving as when he left. Still, three figures seem to be hunting for The Stranger. One of them wears what looks like the Eye of Sauron while another holds a disc featuring a drawing of The Stranger’s constellation. Even if The Stranger isn’t Sauron, these three seem to think otherwise.

The Dweller
The three new characters who make a brief but foreboding appearance in episode five investigate the site where The Stranger fell to earth. The central figure in this trio, listed only as “The Dweller” (Bridie Sisson) in the credits, definitely sets off my Sauron-sense due to their appearance. The Dweller’s white cloak and pale complexion matches Tolkien’s description of the “fair visage” Sauron donned during this age, going by the title Annatar. Plus, the character boasts an engraving of an eye on their chestplate, Sauron’s sigil. However, the fact that The Dweller has two companions in similar dress and appearance leads me to believe that this is simply a devoted Sauron cultist, rather than Annatar himself.

Theo
Whether or not young Theo (Tyroe Muhafidin) is Sauron, I feel confident predicting that some dark fate lies ahead for him. He is in possession of the black hilt which the orc army is searching for. While he seems to be on the side of good, for now, he did mark himself with the hilt in order to fight off an attacking orc. The device sucked in his blood like a vampire to grow a magical blade. It looked suspiciously like the morgul blades the Ringwraiths wield in “The Lord of the Rings.” Is Theo destined to succumb to this evil influence and wind up a servant of the Dark Lord, such as a Ringwraith or The Mouth of Sauron? Arondir (Ismael Cruz Cordova) recently referred to the weapon as a “key,” and a mural depicting the blade stabbing a man through the abdomen hints at tragedy to come. If the image at the top of said mural is the helm of Sauron, the sword’s victim might be Theo, whos death may allow the evil master to take a physical form.

Adar
This dark elf seemed like the obvious choice for Sauron given his sinister appearance, command over the orcs, and ominous entrance into the series. But Adar (Joseph Mawle) is so obvious that he is almost certain to be a red herring from the show’s writers. In the fifth episode he appeared to rebuke the name Sauron, tossing to the ground the Southlander who tries to pledge his allegiance to the Dark Lord. Of course, Sauron infamously detested any “lesser” being uttering his name, so one could interpret this moment as a violent reaction to a common man who dared to address him directly. Still, Adar seems quite connected to the origins of the orc race, a history which Tolkien kept shrouded in mystery with little specifics. So it’s more likely that the writers will use Adar to explore this uncharted narrative than cast him as Sauron.