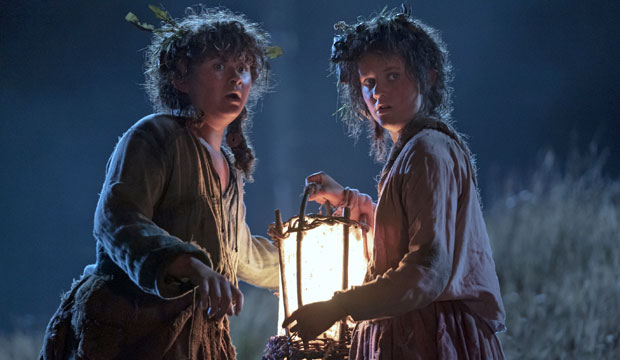 Amazon Prime’s “Lord of the Rings: The Rings of Power” is keeping viewers on their toes each week by dropping clues to several ongoing mysteries. None are more intriguing than the secret identity of the man known only as “The Stranger.”

The Stranger (Daniel Weyman) blasts through the skies of Middle Earth on a meteor before crash landing and being discovered by a Harfoot named Nori (Markella Kavenagh). Little is known about this man. He can barely speak, appears disoriented, and demonstrates a clear connection with magic. The show has dropped several breadcrumbs as to the man’s true identity. Using information from “The Lord of the Rings” author J.R.R. Tolkien’s descriptions of Middle Earth lore, we can piece those clues together to form a small list of suspects.

SEE‘The Lord of the Rings: The Rings of Power’ drops new trailer

The Stranger is most likely one of these four characters:

Sauron
The series certainly wants us to believe that The Stranger is the Dark Lord himself. During the Second Age, Tolkien describes Sauron as a shapeshifter who often takes a “fair” form. It stands to reason that Sauron is hiding in plain sight in “The Rings of Power,” and The Stranger raises a bunch of red flags in this regard. He utters the Black Speech (the tongue eventually spoken in Mordor), and when he does so the skies grow dark and menacing. It would result in a tragic twist of fate if the kind Nori was helping the ultimate evildoer of Middle Earth regain his strength. Plus, after he crash lands in that meteor the resulting flames form a similar shape to “The Eye of Sauron” which will one day loom over the tower of Barad-dur.

Gandalf
The Stranger also shares similarities with everyone’s favorite wizard Gandalf, and not just because the character wears a grey cloak. He falls from the sky and awakens confused, seemingly unable to speak or comprehend his own powers. This is how Tolkien describes wizards as they first set foot on Middle Earth. Wizards are actually Maiar, heavenly spirits sent to Middle Earth in humanoid form by the Valar to aid men and elves in the struggle against Sauron. Like Gandalf, The Stranger has power over fire, as seen in the moment where he absorbs the flames from his crash site. Gandalf possesses the ability to speak with creatures and The Stranger is able to communicate with fireflies to create a constellation. It would also make sense for Gandalf to develop a fondness for Hobbits if he was first aided by their predecessors the Harfoots.

There is however, one major stumbling block to the Gandalf theory: Gandalf did not arrive in Middle Earth until the Third Age, and “The Rings of Power” is set firmly in the Second Age. The series has already stretched the canonicity of certain elements of Tolkien lore, so it’s possible they have found some loophole to work Gandalf into their show. Perhaps they will introduce him by the name Olórin, his Maiar title, and never utter the name Gandalf in the series.

The Blue Wizards
Many signs suggest that The Stranger is a wizard, but there is an even more exciting possibility here than Gandalf. Tolkien stated that five wizards were sent to Middle Earth. Gandalf, Saruman, and Radagast make appearances in the core story, but two other wizards are only briefly mentioned: The Blue Wizards. This pair, named Alatar and Pallando, provide a perfect canvas for “The Rings of Power” series. So little is known about the Blue Wizards, that the show’s writers have plenty of wiggle room to forge their own tale while not contradicting Tolkien’s canon. And unlike the three wizards that audiences know from the novels and films, Alatar and Palladino first set foot in Middle Earth during the Second Age. Their mission was to weaken Sauron’s hold on the eastern and southern regions of the continent.

If you’re reading this and thinking “but The Stranger is only one man,” I urge you to consider the constellation which he is intent to follow. When he commands the fireflies into a formation in the sky, the shape they create has two parallel arcing lines. It’s possible these lines represent the path in which two wizards fell from the sky. If this Stranger is one of the Blue Wizards, he may be looking for his friend by using this constellation as a map.

A Balrog
Fans were quite surprised when the unmistakable visage of a balrog appeared in the trailer for “The Rings of Power.” You may remember that one such creature had an infamous standoff with Gandalf in “The Fellowship of the Ring.” That specific monster has been teased by the deep mining of the dwarves, but he won’t come into play yet unless the series shakes up the timeline in a major way. Instead, the balrog glimpsed in the trailer could be The Stranger in a different form.

While Tolkien provides no example of a balrog shapeshifting from human to demon forms, the series may simply be expanding a bit of his mythos. Like wizards, balrogs are also Maiar, only they were corrupted by Morgoth. As such, they take on the form of a demon made of flame and shadow, and served the dark master in the First Age. Since balrogs are Maiar, it is possible that Sauron sent one down to earth as a human so that the balrog can work in secrecy before morphing into a demon. This would serve as a neat excuse as to why there is zero mention of active balrogs in The Second Age in Tolkien’s writings and explain the appearance of this fiery species in the trailer.