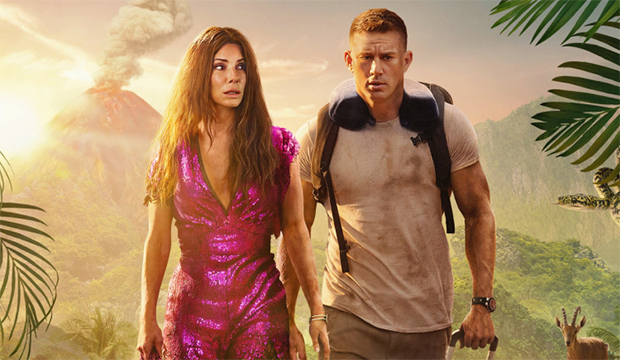 Back in late March, when Paramount released “The Lost City,” starring Sandra Bullock, Channing Tatum, Daniel Radcliffe and Brad Pitt, the movie looked like a cute enough rom-com adventure movie in the vein of “Romancing the Stone” and “The Jewel of the Nile.” Those two mid-80s movies brought together Michael Douglas and Kathleen Turner, the latter playing a romance novelist similar to Bullock’s character.

“The Lost City” opened #1 with $30.4 million and then proceeded to be one of the nicer box office surprises of the year, remaining in the top 10 for nine weeks straight but maintaining astounding business from week-to-week post-Easter with a few weekends where it barely dropped 12% from its previous week. As of Friday, the movie has now grossed $100 million with quite an amazing run in the top 10, and that’s despite being released on VOD and Paramount+ quite recently.

The comparisons to the Douglas-Turner ’80s adventure movies were made quite frequently as critics generally seemed to like the movie to the tune of 79% on Rotten Tomatoes, but audiences would like it even more, despite its “B+” Cinema Score.

The success of the movie may not have been that much of a surprise for the Oscar-winning Bullock, who first crossed the $100 million mark when she was teamed with Keanu Reeves for the 1994 action-thriller, “Speed.” That was followed by three more movies to make more than $100 million: “A Time to Kill,” the animated “Prince of Egypt” and 2000’s “Miss Congeniality.”

Bullock wasn’t just going to be a superstar of the ‘90s, though. Since she was paired with Ryan Reynolds in 2009 for the rom-com “The Proposal,” she’s continued to have bigger and bigger hits. That same year, Bullock starred in “The Blind Side,” which not only grossed $256 million to become her biggest hit, but she won her first Oscar for that movie. In 2013, she was teamed with Melissa McCarthy, quite hot after her Oscar nomination for “Bridesmaids,” and that, too, made over $150 million. Still, that wouldn’t be Bullock’s high point as a box office star with even bigger hits with Alfonso Cuaron’s “Gravity” ($274 million domestic) and the animated Minions ($336 million). Even when Bullock went the Netflix route with the thriller “Bird Box,” that has remained one of the streamer’s most-viewed hits to date.

The point is that Bullock has been one of the most reliable box office stars since the ‘90s even with the little bit of bump the movie might have gotten from the very small role by Brad Pitt.

For Tatum, “The Lost City” continues the amazing year he’s been having after his directorial debut “Dog” (co-directed with his regular production partner, Reid Carolin) made $61.8 million, although he, too, has quite a history with franchise blockbuster hits. These began with Tatum playing Duke in “G.I. Joe: The Rise of Cobra” in 2009 and again in “G.I. Joe: Retaliation” in 2013. In between, Tatum starred in the Nicholas Sparks adaptation of “The Vow,” which also made over $125 million. Tatum then teamed with Jonah Hill for the hit comedy, “21 Jump Street,” based on the popular ‘80s series, and then used that success to get his own “Magic Mike” franchise off the ground with Steven Soderbergh. That, too, made more than $100 million domestically, and both of those warranted sequels, although “22 Jump Street” almost made $200 million to “Magic Mike XXL’s” $66 million. Tatum also voiced Superman in “The Lego Movie” in 2014, which grossed $258 million, which is still the actor’s biggest hit, and returned to voice the role in “The Lego Batman Movie” in 2017 and “The Lego Movie 2: The Second Part” in 2019. He even had yet another $100 million hit by appearing in Matthew Vaughn’s “Kingsman: The Golden Circle” in between those “Lego” movies.

(Hey, want to hear a pretty amazing coincidence? One of Tatum’s earliest film roles was in Steven Spielberg’s “War of the Worlds” with Tom Cruise, who looks to finally breaking his own domestic box office record with “Top Gun: Maverick,” now playing in theaters.)

The point is that both Bullock and Tatum have a fairly robust career as box office superstars, but “The Lost City” managed to make $100 million in the middle of a pandemic that’s hobbled so many other “sure things,” and it’s the first completely original non-sequel/non-remake to do that well within a sea of superhero and video game movies.

There’s been no word whether Paramount wants to make a sequel, but there’s a good chance that will be up to the two main actors, but there’s no question that the two of them have such great chemistry that “The Lost City” has managed to appeal to a fairly neglected moviegoing audience i.e. women of a certain age. Paramount definitely should get quite a bit of praise for standing by the movie as it found an audience, rather than only giving it a few weeks to do so.