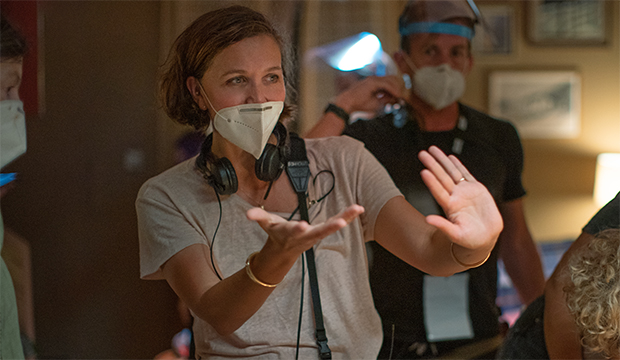 After beginning its limited theatrical release on December 17, 2021, “The Lost Daughter” finally bowed on Netflix on Friday, December 31, and has our forum posters taking their hats off to Maggie Gyllenhaal‘s feature directorial debut. “‘The Lost Daughter’ is a revelatory film with great performances and a top-tier screenplay,” raves Gold Derby user K Olivia in our movie forums. FreemanGriffin echoes those thoughts, adding, “Maggie Gyllenhaal’s direction is so flawless.” Read on for more “The Lost Daughter” reactions and then join the discussion to have your say.

SEE Maggie Gyllenhaal (‘The Lost Daughter’): Directing debut is about a woman ‘as a lover, as a thinker, as an artist, as a mother’ [EXCLUSIVE VIDEO INTERVIEW]

Based on the novel of the same name by Elena Ferrante, “The Lost Daughter” stars Oscar and Emmy winner Olivia Colman as Leda, an academic on holiday in Greece. Her increasingly strained interactions with obnoxious fellow holidaymakers and her obsession with Nina (Dakota Johnson), a younger woman holidaying with her infant daughter, lead to her confronting uncomfortable truths about her past experiences as a mother, which play out in flashbacks featuring Jessie Buckley as a younger Leda raising two daughters. The ensemble cast also stars Ed Harris, Dagmara Domińczyk, Paul Mescal, Jack Farthing, Oliver Jackson-Cohen and Peter Sarsgaard.

The film had its world premiere at last year’s Venice International Film Festival, where it was catapulted into the awards race after Gyllenhaal took home the coveted Best Screenplay prize. It has since swept the Gotham Awards and bagged two Critics Choice Award nominations for Colman’s lead performance and Gyllenhaal’s screenplay, as well as four Independent Spirit Award bids, including Best Feature. As of this writing, our combined odds forecast two Oscar citations for the film: Best Actress for Colman (second place) and Best Adapted Screenplay for Gyllenhaal (second place). Even though it hasn’t cracked our top 10 for Best Picture just yet, it’s on the outside looking in in 12th place and has the backing of the following six Experts: Thelma Adams (Gold Derby), Shawn Edwards (WDAF-TV Fox), Matthew Jacobs (unaffiliated), Tariq Khan (Fox TV), Susan King (Gold Derby) and Tom O’Neil (Gold Derby).

Below, see a small sampling of what our forum users think of “The Lost Daughter.” Sound off in our message boards to give us YOUR thoughts.

diego: “Colman excellent, Buckley excellent, but a thing I really loved about this is how all the actors were given their little moments to shine throughout the film. Harris, Sarsgaard, Mescal, Johnson, Domińczyk, Farthing, Jackson-Cohen… everyone had at least one scene to show what they are capable of, which was pretty nice. Gyllenhaal’s work is also impressive — sure you can tell it’s a debut at times, but that doesn’t take away from the fact that her work here is genuinely great.”

FreemanGriffin: “In my opinion, Olivia Colman gives the single best performance by any actress in 2021. She is simply amazing, phenomenal, superb, raw, real — and she is matched by Jessie Buckley as the younger Leda. This film has stayed with me for weeks, scenes replay in my mind because Maggie Gyllenhaal’s direction is so flawless. The songs that are used throughout enhance the film so much. All of the supporting performances are top-notch. The editing is so seamless. This movie was a total movie experience.”

gromit: “Saw this film last night and am still haunted, can’t stop thinking about it. I’ve read Elena Ferrante’s book beforehand and the film felt very true in spirit. Maggie Gyllenhaal’s direction and script felt very intimate, allowing the audience to form their own opinions through the unspoken visual exchanges instead of dictating what we should be thinking. And who better than the master of devastating glances, Olivia Colman. She is just astounding, I’ve not seen her in a role like this before. Totally deserving of all the glowing reviews she’s been receiving.”

Hawk: “I just finished watching ‘The Lost Daughter,’ and will have more to say about the film itself later, but my main thought right now is Olivia Colman and Dakota Johnson blew me away with their performances. Jessie Buckley was very good too. Wow!”

JV: “Lowkey horror movie. Love Gyllenhaal’s work. Voyeur, intimate camera work to the point where you’re just watching people doing regular things. This is the film version of that feeling when you go to a place you never went before and see people you never met just to get kind of mixed in the life of strangers just to never see them again. I’m sure Maggie Gyllenhaal took some inspiration from ‘Rear Window.’ Colman is just sublime in this. At times she wasn’t even trying to perform from a script, it felt like Gyllenhaal just told her, ‘I’m gonna show some weird shit to you and you’re just going to react,’ and she killed it. Jessie Buckley was really great as well in the flashbacks scenes.”

K Olivia: “What a stunning directorial debut from Maggie Gyllenhaal. Now I understand why awards groups have nominated/honored her work. ‘The Lost Daughter’ is a revelatory film with great performances and a top-tier screenplay. I’ll be rooting for this movie all season.”