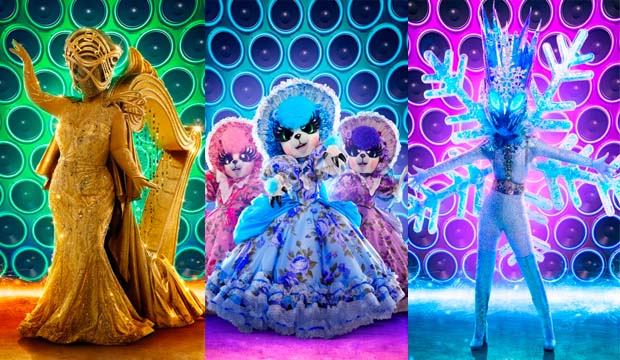 Tonight on “The Masked Singer,” Harp, Lambs and Snowstorm participate in a three-way battle to determine the finalists. One contestant is eliminated and forced to reveal themselves in front of America on Thanksgiving Day.

SEE Everything to know about ‘The Masked Singer’ Season 8

Below, read our minute-by-minute “The Masked Singer” recap of Season 8, Episode 10, titled “Battle of the Semi Finals” to find out what happened Wednesday, November 24 at 8:00 p.m. ET/PT. Then be sure to sound off in the comments section about your favorite costumed characters on Fox’s reality TV show and who you think has what it takes to win the entire competition.

8:02 p.m. — Nick introduces Harp, Snowstorm and Lambs to the stage in this semifinals celebration. 18 celebrities have been unmasked and we’re down to the top three. Tonight they’ll each perform a song and then face off in an epic three-way Battle Royale.

8:05 p.m. — Harp is up first. In her clue package she states, “I’m really excited about making the semifinals and I really wanna win. I’m so grateful to be here because I’ve always been a fan of the show. Me and my family and my friends always watch it and it’s been very hard not saying anything. Now, my sisters don’t know, my dad doesn’t know, my friends don’t know. My man doesn’t know, he thinks I’m filming a movie. My mom is the only person I’ve told. My mom and myself are very alike. She was a singer just like me. She’s my rock. If I had a handful of people that believed in me the way that my mom believes in me, I know that I can soar so far. That woman thinks I can do anything. I want to win this for her. Thank you mom, for being such a great example in my life and being my best friend. I love you.” In this clue package we see a #1 gold trophy and several photos of past “Masked Singer” winners.

8:10 p.m. — Tonight Harp is singing “About Damn Time” by Lizzo. It’s been weeks since we heard Harp sing and I’ve missed her! She has an incredible voice and it’s nice to hear her sing a fun, uptempo song. Obviously she killed this performance like she has each week. Nicole calls it the best performance of the entire season. Jenny calls her an icon. A turkey brings out an additional clue for Harp, a photo of Oprah. “When I met Oprah for the first time, I brought my my mom with me. I was going to introduce her, but before I did, she said ‘Hello,’ and already knew her name. You know you’ve made it when Oprah knows your name and your mom’s name.” The panel guesses Harp is: Jennifer Hudson (Ken), Jordin Sparks (Jenny) and Amber Riley (Nicole).

8:15 p.m. — Up next is Snowtorm. In her clue package she says, “Ever since I was a little girl I always dreamed of being a pop star. When I was in high school I was taking voice lessons and one day my mom said she got a call from my voice teacher saying, ‘I’m sorry, but your daughter doesn’t have it.’ That was the day my dream died. That’s why I’m very thankful I’m still here on this show. I’m really grateful for the opportunity to express myself in a way I never thought I would be able to artistically. And I hope by making it to the finals next week I continue to inspire any kid or adult who thinks they don’t have it. I promise you, you do have it, you just gotta unmask it. If my voice teacher is out there watching, don’t change the channel. Because proving you wrong someday has kept me going all these years. So this one’s for you, dream killer!” In the video we saw a cinema ticket, hinting she’s an actress. We also see a snow globe and a sign that says “Live.”

8:25 p.m. — Tonight Snowstorm is singing “Thinking of You” by Katy Perry. It’s a romantic, beautifully performed song. It’s probably her strongest vocal of the season. Jenny says she “blew us away” and Robin calls it her “best vocal performance.” For an additional clue, a Thanksgiving Day parade walks out with a balloon sign that says “Squiggly.” She says, “Squiggly Monster was a dear friend of mine and is no longer with us. It feels really weird to cry with this voice, but he was the reason that I decided to do this show because his experience was so rewarding. I’m so glad that he got to have it before he passed away. My performances have been for him whether he would want that or not.” Squiggly Monster, of course, was Bob Saget. The panel guesses Snowstorm is Whitney Cummings (Robin), Nikki Glaser (Jenny) and Kristen Wiig (Ken).

8:30 p.m. — Last up tonight is Lambs, who say, “On this Thanksgiving, there’s nothing we’re more thankful for than each other. And we’ve always known that, even when we were little girls. We were young ladies when we hit it big. Even though we were incredibly grateful, we were so burnt out that we started to have issues. It was very sad. We knew that going our separate ways was probably the best decision at that time. It was a good thing for us. It really gives you perspective, and a break, and you can find yourself again. When we reunited it was like no time had passed. That bond is what we are taking into the semifinals. We have won a few other awards in our life, but it’s been a very, very long time! We are ready for another win. We’re just going to fight over who gets to take home the trophy.” A couple visual clues in the package included an “International Platinum Class Ticket.” Perhaps they have some platinum records?

8:35 p.m. — Tonight Lambs are singing “Need You Now” by Lady A. It’s just fun to watch them sing. The harmonies are blending so well tonight. Nicole says the music comes from their soul, veins and spirit every time. Next, that wacky turkey is back to deliver another clue. It is a plaque that says “REUNION.” One lamb says, “For a long time, I didn’t think that we would be singing together on stage ever again, but I never gave up on the three of us getting back together. It’s unthinkable for us not to be singing together again for the rest of our lives.” The panel guesses these three lambs could be All Saints (Nicole), Spice Girls (Ken) and Wilson Phillips (Robin).

8:45 p.m. — It’s now time for the first ever three-way Battle Royale. Harp, Snowstorm and Lambs will each be putting their own unique spin on “Since U Been Gone” by Kelly Clarkson. “Go girl power!” Jenny yells following the battle. Now the studio audience and the panel will vote. The top two will move on to next week’s season finale. One act will be eliminated and unmasked.

9:02 p.m. — The two acts advancing to the finale are Harp and Lambs! That means Snowstorm will be forced to take it off and reveal herself. But before that happens, the panelists announce their final guesses: Whitney Cummings (Robin), Iliza Shlesinger (Nicole), Kristen Wiig (Ken) and Nikki Glaser (Jenny). After a cruel commercial break, Snowstorm finally pulls off that mask to reveal herself as comedian Nikki Glaser! Jenny was right! That’s a wrap for tonight. Happy Thanksgiving everyone!