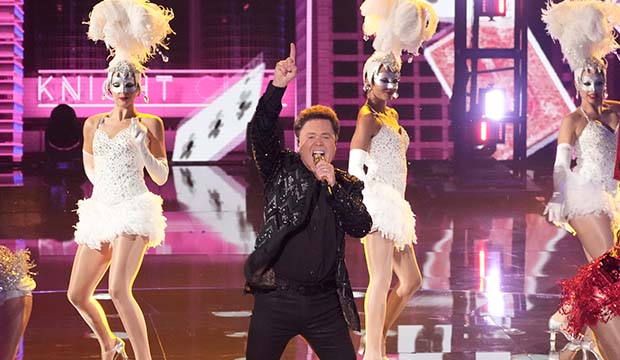 Each episode features several jaw-dropping performances by intricately disguised celebrities, but for the first time ever, only one contestant will move on from each episode. The studio audience will vote for their favorite, and the singer with the least amount of votes will unmask mid-show! That celebrity will get a front row seat in the “Masked Singer” VIP section to watch the rest of the competition and the second unmasking.

Next, the Top Two singers face off in a Battle Royale performance of the same song. The winner will be crowned the King or Queen of “The Masked Singer” and move on to the next week’s episode against new competition, and the other will unmask! The three finalists left standing after each round will compete in the Semi-Finals.

SEE Everything to know about ‘The Masked Singer’ Season 8

Below, read our minute-by-minute “The Masked Singer” recap of Season 8, Episode 2, titled “Vegas Night” to find out what happened Wednesday, September 28 at 8:00 p.m. ET/PT. Then be sure to sound off in the comments section about your favorite costumed characters on Fox’s reality TV show and who you think has what it takes to win the entire competition.

8:00 p.m. — “Previously on ‘The Masked Singer’!” In the Season 8 premiere, Harp was named the reigning Queen following a masterful rendition of “Perfect” by Pink. That meant three other singers were sent packing, beginning with Emmy winner William Shatner as Knight and comedy legend Eric Idle as Hedgehog. The episode left off just as we were about to find out who was hiding inside the Hummingbird costume…so let’s see who it is!

8:03 p.m. — It’s time for Hummingbird’s unmasking. The feathered crooner rips off that claustrophobic beak of his to reveal… NSYNC star Chris Kirkpatrick! Robin complains, “We’ve guessed him for seven seasons!” Hummingbird sang “I Don’t Want to Be” by Gavin DeGraw and the panelists thought he might be Tom Brady, Peyton Manning, Deion Sanders, Rob Thomas or Uncle Kracker.

8:05 p.m. — With one celebrity already unmasked, Donny Osmond hits the stage to give us a glimpse of his Las Vegas act. The Season 1 Peacock sings a medley of “The Greatest Show” and “Viva Las Vegas” before joining the panelists for the remainder of tonight’s episode. Next, Nick announces the reigning Queen, Harp, will return to the stage to face off against two new competitors.

8:07 p.m. — Tonight’s first challenger is the Panther. He’s one tall cat who says he’s lucky to be here on Vegas night. One of the biggest lessons he learned is to always bet on yourself. Right from the jump he was at the top of his game and rubbing shoulders with Beyonce. Until one day, people thought he was dead. Even his own family! He had the rare opportunity to attend his own funeral and see how others would remember him. It made him realize he had more of a legacy to leave, so he started back at one, to show he’s a scholar, a son, a lover and a leader. Tonight he hopes to prove that nothing and no one has the power to define him. Visual clues throughout this package include a basketball, salacious headlines in a newspaper, signs that read “Def Fence,” and a VHS with “Panther’s Creed” written on it.

8:10 p.m. — Panther is singing “Feeling Good” by Nina Simone. It’s not the voice I was expecting to come from this big cat. The man can sing! I can’t place the tone, so I’m not sure if it’s someone known for singing or a celebrity with a hidden talent. The panelists seem equally confused. Nicole calls it a “soulful, beautiful” performance. Nick brings in an extra clue via a contortionist. There’s a picture of a globe and the word victory. “Victory isn’t just about winning. Victory means the world to me,” Panther says. The panel guesses: Andre Drummond or Sam Richardson (Ken), Lamar Odom (Jenny) or Billy Porter (Nicole).

8:15 p.m. — The next challenger is the Pirate. It’s actually a Pi-RAT…a mousy man with an eye patch. When he was eight years old, he wasn’t very popular. But he had a unique way of making his own friends, and he always got a laugh. Him and his crew set sail to pursue the impossible dream and go where few had gone before — Hollywood. His family said he had talent, but everyone else thought he was a total dummy. He proved them wrong and now he’s the king of all pirates. While he’s performed in Vegas many late nights, he’s never leading man. Tonight he’s the star of the show. Visual clues in this package include a beach locale, a string puppet, the Hollywood sign, “Dinner for Dummies” written on a serving platter and “Late Laugh” written in the sky.

8:20 p.m. — Pirate is singing “Crocodile Rock” by Elton John. It only takes a few notes to realize he’s not going to measure up to Panther. He looks like he’s having a good time on stage, but this Pirate can’t sing. There’s no doubt he’ll unmask within the hour. But will the panelists predict his identity? Donny says Pirate knows how to work an audience, but he’s not a dancer. Pirate responds, “Oh, he’s doing something without his sister?” Shots fired! Carrot Top himself delivers a clue from the Vegas strip. The Pirate Special menu is held in his hands. Pirate says he has something very special to share with the world, and we’re getting a taste of it tonight. The panelists guess he is Robert Smigel (Ken), Terry Fator (Nicole) or Jeff Dunham (Donny).

8:30 p.m. — It’s time for the return of the reigning Queen, Harp. She says it’s incredible to be the first queen of Season 8, but she knows she has to crush the performance. She’s been labeled competitive her whole life. She works hard to be the best. Her brand new clue is a CD with the words “Night Night” on it. We also see more images of some kind of witch hat and 3-D glasses.

8:35 p.m. — Tonight Harp is singing “I Have Nothing” by Whitney Houston. It’s a powerhouse song that few can deliver, but she’s done it. Donny looks completely mesmerized. Nicole is screaming before the performance even ends. It’s truly one of the best performances I’ve ever heard on this show. “That’s an angel!” Donny screams. Next, a clown brings out a clue that says “collaborated.” Then Harp says, “Well you know Nicole, I always love seeing our names together. We should make it happen again soon.” The panelists guess Amber Riley (Nicole), Ashanti (Jenny) and Yvette Nicole Brown (Robin). I agree with Nicole on this one.

8:45 p.m. — It’s time for one singer to be unmasked. The masked celeb being revealed first is the Pirate. Before he leaves, the panel must reveal their final guesses: Robert Smigel (Ken), Terry Fator (Nicole), Dana Carvey (Robin) and Carrot Top (Jenny). The Pirate then takes it off and reveals his true identity is… Jeff Dunham. Donny was right!

8:50 p.m. — The time has come for the first ever Battle Royale. Panther and Harp will face off to become king or queen of “The Masked Singer.” They will sing the same song in two different styles and then the panel decides who moves on. Tonight’s song is “Born to be Wild” by Steppenwolf. Panther’s voice sounds completely different than it did just minutes ago. He’s a versatile vocalist who knows how to rock out. Next, Harp does her thing with the song and she proves she can sing anything. Her final note is epic.

8:55 p.m. — The panel has decided that Harp will keep her crown as Queen of “The Masked Singer.” Panther will be unmasked.

9:00 p.m. — Before Panther unmasks the panel reveals their final guesses: Lamar Odom (Jenny), Billy Porter (Nicole), Iman Shumpert (Robin), Andre Drummond (Donny) and Sam Richardson (Ken). Panther pulls off his mask to reveal Grammy nominated, multi-platinum soul singer Montell Jordan! He has been a frequent guess of Robin’s in the past, but nobody named him tonight. The basketball threw everyone off. That’s a wrap for tonight’s episode!