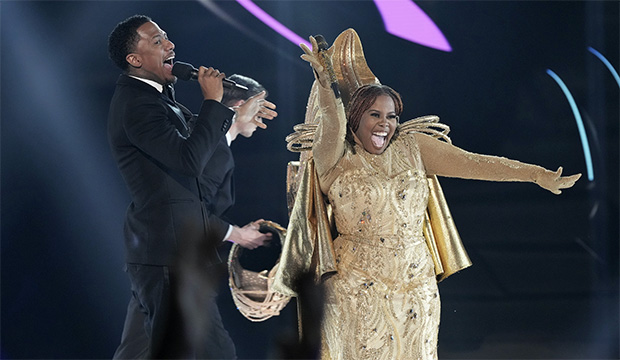 If you thought Amber Riley winning the Golden Mask during the November 30 finale of “The Masked Singer” was the end of Season 8, you’d be dead wrong. Fox’s wild and wacky reality TV show still has one extra episode left, the Seasonal Sing-A-Long Spectacular, which will air in its normal Wednesday night time slot on December 7, 2022.

The annual Sing-A-Long is a chance for fans at home to whet their whistles and croon along with the contestants of Season 8. Expect many of your favorites to make special holiday appearances, so you can pluck along with the winner (Amber Riley as Harp), bleat with the runners-up (Wilson Phillips as Lambs) or shiver with the semi-finalist (Nikki Glaser as Snowstorm). As always, the lyrics will appear on screen with a bouncing ball keeping the tempo.

This eighth installment featured more costumes than ever before — 22, to be exact. And the format was tweaked so that multiple celebrities were unmasked every week during special themed episodes (think “TV Themes Night” or “Fright Night”). Perhaps this new change was what allowed the show to cast so many more famous faces than ever before?

SEE ‘The Masked Singer’: Top 14 most famous celebrities of all time

Nick Cannon returned to host Season 8 of “The Masked Singer” and the four panelists were, as always, Robin Thicke, Jenny McCarthy, Ken Jeong and Nicole Scherzinger. This year, only Nicole was savvy enough to guess the identities of the winner and the runners-up. Hey, where’s her second Golden Ear trophy?

Are you excited to watch the Seasonal Sing-A-Long Spectacular on December 7? Be sure to let us know down in the comments section.