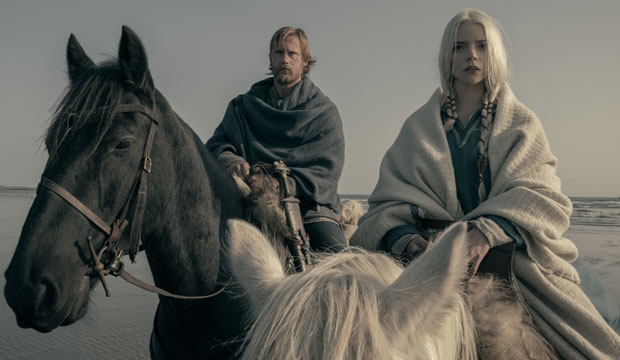 Robert Eggers’s viking epic, “The Northman,” has been out for a few weeks now, and while it hasn’t done huge business at the box office – about $31 million as of this writing – it’s an interesting release for early potential awards conversations.

Eggers burst onto the scene in 2015 when his debut feature “The Witch” premiered at the Sundance Film Festival, where the filmmaker received a jury prize for his direction. It wouldn’t be released by A24 until a year later, at which point it continued to achieve acclaim, winning two Indie Spirit awards in February 2017 for Best First Feature and Best First Screenplay.

Eggers’s latest movie stars Alexander Skarsgård as Amleth, who, as a young Nordic prince, was chased from his home after his father, King Aurvandil (Ethan Hawke), is brutally murdered by his brother Fjölnir (Claes Bang). Decades later Amleth has become a Viking berserker, but seeing a chance to get revenge and save his mother, Queen Gudrún (Nicole Kidman), he returns disguised as a slave and gets help from Anya Taylor-Joy’s Olga to fulfill his destiny.

When considering “The Northman’s” awards chances, we do have to remember it’s only May, and also that genre films have a tough time with the academy. Every now and then you get a “Get Out” or an “Avatar,” but these are few and far between. Last year David Lowery’s similar “The Green Knight” was completely snubbed for Oscar nominations. However, its original score by Daniel Hart was shortlisted, which makes you wonder whether academy members might be more open to watching “The Northman” with awards in mind.

“The Northman” was received quite well by critics with 89% freshness on Rotten Tomatoes, but that’s compared to the 64% audience score, and it also received a “B” CinemaScore, which is actually the worst for a movie this year other than “Morbius.”

That last bit might make some more than a little dubious that “The Northman” could do well enough among academy voters to get into the Best Picture race, but it does have a number of other elements to take note of. Although it’s based on a legend that also inspired Shakespeare’s “Hamlet,” Eggers’s screenplay, written with Icelandic poet Sjón, might be considered original enough for academy’s screenwriters branch to go that direction.

Skarsgård has yet to be nominated for an Oscar, but he did win a Primetime Emmy and a Screen Actors Guild Award for the HBO drama “Big Little Lies,” and he received critical praise for his earlier role on HBO’s “True Blood.” “The Northman” is a major achievement for Skarsgård, since he was quite pivotal in getting the movie made (he’s also a producer of the film). Starring in a Viking epic must be a pretty big deal for the Scandinavian actor, and he’s well-matched with Bang, who is best known for starring in Ruben Östlund’s “The Square,” for which he won a European Film Award.

SEELisa Marie Presley loves Baz Luhrmann’s ‘Elvis,’ and says she will eat her own foot if Austin Butler doesn’t get an Oscar

While Skarsgård and Bang take on a lot of the heavy lifting in terms of action, Oscar voters (and SAG members) might be better off taking note of Taylor-Joy and Kidman’s performances. They both have strong supporting roles and Kidman is a previous Oscar nominee with five nominations and one win for “The Hours.” Kidman previously starred as Skarsgård’s wife in “Big Little Lies,” for which she also won an Emmy, but here she’s playing a very different role as his mother.

But no, for “The Northman,” it will probably be all about the crafts, as the talented collaborators who worked on Eggers’s two previous features are all back working on his third film.

Eggers’s cinematographer Jarin Blaschke received an Oscar nomination for “The Lighthouse,” which was filmed in black and white using film stock that hadn’t been used in decades. “The Northman” looks just as gorgeous in full color with its picturesque Icelandic landscapes (mostly shot in Ireland) and a few impressive one-take action shots.

Since Best Cinematography and Best Production Design frequently go hand-in-hand, the work of Craig Lathrop is also worth noting, since recreating 9th century Iceland and Europe involved building a lot on outdoor locations, although the work might not be flashy enough for the academy’s designers branch.

Linda Muir’s costume design also adds a lot to the atmosphere for Eggers’s epic, especially in the opening sequence where things are going better for Amleth and his family. Another particularly fetching costume is the one to turn Icelandic popstar Bjork into an oracle who visits Amleth in a fantasy sequence to warn him of his future.

The hair and makeup teams led by designer Maralyn Sherman had their work cut out for them in helping the actors get into proper character for the times.  During the film’s opening, Willem Dafoe is almost unrecognizable as the mystical court jester (of sorts) when he first shows up, and a lot of that has to do with his makeup and hair. Same with Bjork’s aforementioned seer.

To create the very specific pacing for “The Northman,” Eggers continued to work with his go-to editor, Louise Ford, who also had a good deal of action scenes to cut together, despite a few of them being shot as single takes.

There’s surprisingly little obvious visual effects work in “The Northman,” but it is used for a number of fantastic scenes at sea, for some of the fantasy/dream sequences, and to create the volcano in the film’s climactic final act battle.

The score for Eggers’ film was composed by his British musical friends, Robin Carolan and Sebastian Gainsborough, the latter being better known for his electronic and orchestral music under the name Vessel. Many of his records have been released through Carolan’s record label, Tri Angle Records, but “The Northman” is their very first work scoring for film, not that you could tell since they used authentic instrumentation from the era to achieve just the right tone.

We don’t frequently think of stunt performers when talking awards, but the Screen Actors Guild does have a category for the amazing stunt teams that contribute to action films like “The Northman,” but we’ll have to see if it can make a mark against much higher-profile studio action movies, including DC and Marvel superhero films, especially with so much time left in the year.

With that in mind, “The Northman” may have a slightly better chance than “The Lighthouse” to get Eggers noticed by the academy – there are certainly aspects of the film deserving of the attention – but it’s too early to tell. In the meantime, “The Northman” is still playing in theaters and is also now available On Demand.