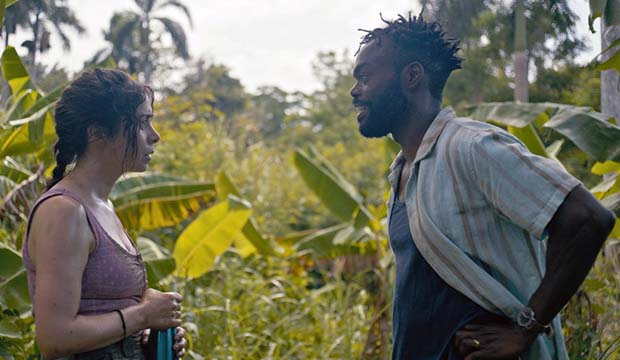 On July 28, 2022, Peacock released its latest original series, “The Resort,” created by Andy Siara (“Palm Springs”) and co-executive produced by Sam Esmail (“Mr. Robot”). The dark comedy mystery stars Critics Choice Awards nominee Cristin Milioti (“Fargo”) and Emmy nominee William Jackson Harper (“The Good Place”) as a married couple celebrating their 10th anniversary in the Mayan Riviera. Their marriage is put to the test when they find themselves embroiled in one of Yucatan’s most bizarre unsolved mysteries from 15 years prior.

After premiering the first three episodes in binge-worthy fashion, the streamer will release singular episodes each Thursday until the season finale on September 1. The show currently holds an impressive freshness rating of 87% on Rotten Tomatoes with the consensus stating, “‘The Resort’ teases more mysteries than it can satisfyingly pay off, but its likable cast and jaunty tone make for a compulsively watchable vacation.”

Vicky Jessop of London Evening Standard praises ‘The Resort’ as “fizzy, fun and easy to binge-watch. Plus, there’s the escapism of seeing Mexico in all its glory on the small screen.” Saloni Gajjar of AV Club is equally as entranced by the series, but calls it clunky. “Yet despite its shaky coherence, the series still makes for weirdly compelling fun.” That is due to the cast “who pull off emotional and comedic nuance even as The Resort gets caught up in its complicated premise.” “The show’s MVP, though, is Luis Gerardo Méndez, who balances the thin line between being funny and allegedly menacing without revealing his intentions.”

Nick Allen of RogerEbert.com begins by stating that the series becomes “incredibly convoluted and drawn out, the kind of mystery that makes you question what it even thinks it is doing.” He continues, “Here is a series that is more or less all exposition, all clues and memories, and it barely feels like a plot. Instead, ‘The Resort’ uses a mystery to create the illusion of movement, in this case of going on a kooky adventure.” Describing the show as tedious with little worth the watch in terms of thrills or comedy, there is something that Allen praises. “The only sturdy emotional arc that might exist in this story belongs to Nick Offerman, whose performance as Violet’s father displays how the experience of grief transforms someone, and can always return them to unanswered questions.” In conclusion, “it’s clear that there is no grand scheme behind ‘The Resort.’ If there ever was one, it’s long gone.”

Jordan Lyon of Ready Steady Cut praises the differing timelines, especially the one set in 2007 that “gets the tone and vibe of that era.” This is due to the cast that Lyon heaps praise upon stating, “I’d say everyone was perfectly cast.” He also writes, “And whilst the setting is great, it’s the emotion of the show that drives it to excellence.” Lyon only has a singular concern: to prevent the show from becoming akin to past works from the creators. “Whilst it shares some qualities with [their previous] shows, much like the fact that all three shows have brilliantly written characters, The Resort stands up on its own.”