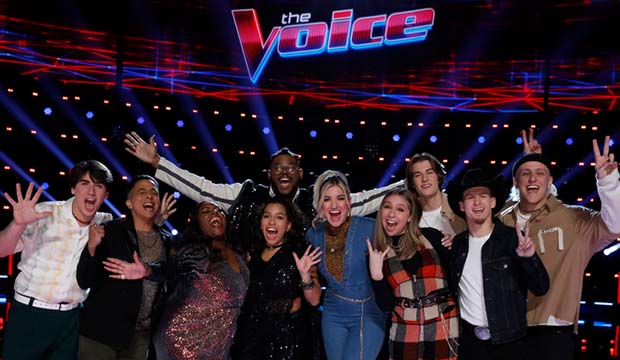 Tonight on “The Voice,” it’s fan week as the top 10 artists perform songs selected by the fans in front of coaches Camila Cabello, John Legend, Blake Shelton and Gwen Stefani for their chance at a spot in the top 8.

Below, read our minute-by-minute “The Voice” recap of Season 22, Episode 20 to find out what happened Monday, November 28 at 8:00 p.m. ET/PT. Then be sure to sound off in the comments section about your favorite artists on NBC’s long-running reality TV show, which coach you’re rooting for and who you think will ultimately join “The Voice” winners list for this 22nd season. Carson Daly hosts the Emmy-winning program. Here are the current team breakdowns:

8:00 p.m. – “Previously on ‘The Voice‘!” The top 10 were revealed and three contestants were eliminated after America’s vote. Kique (Team Gwen) won the instant save and Devix (Team Camilla), Eric Who (Team Camilla) and Alyssa Witrado (Team Gwen) were sent home. Tonight the top 10 will sing for America’s vote before two more are sent packing on Tuesday’s live elimination episode. Let’s go!

8:01 p.m. – Starting the night off was Team Legend’s Parijita Bastola and her rendition of “Scars to Your Beautiful.” Parijita said she was intimidated by the upbeat nature of the song choice because it’s not really her thing, but recognized that it was an opportunity for her to show a different side of her artistry. Blake called it a “masterclass” in expressing passion and joy and said her execution was perfect. Camila said there’s a soulful presence to her voice and that she felt that performance deeply from her. Gwen thought the song was the perfect fit for what she could produce on her own record and John agreed that it represented what she’s been to the show.

8:14 p.m. – The first Team Blake artist to perform was Rowan Grace with “i love you.” Blake liked the choice because it is stripped down and Rowan appreciated that it’s a heartfelt song that she can connect to. Camila loved Rowan’s tone of voice on the song, but considered it challenging because of how exposed her voice is. Gwen thought it was gorgeous and impressive for her age and John agreed that it was challenging, but she “nailed it.” Blake said that she met the challenge and everything she showed with her voice is what makes her uniquely her.

8:28 p.m. – Voice alumnus Wendy Moten was at a viewing party in Nashville to introduce Justin Aaron‘s performance of “Just Once.” Justin and Gwen knew that it’s a song the fans would know very well so that was a little scary to be able to live up to the expectations, but Justin was able to find a personal connection to the song through his relationship with his mom and wife. John pointed out how much his family loves Justin and Camila added that his tone is beautiful on top of him being a masterful singer who performs with ease. Gwen thought the song was a perfect fit for him because of the key changes that he was able to master and thinks that he’ll be getting a lot of votes overnight.

8:41 p.m. – Team Blake returned to the stage with Brayden Lape‘s version of “Homesick,” a song he relates to at this point in the competition. Camila called the performance “delightful” and her favorite of his to date. Gwen thought the song “fit like a glove” and finds all of his performances so engaging. Blake has seen Brayden grow and develop throughout the competition and that once he grows his confidence more he’s going to “way too big.”

8:53 p.m. – Kim Cruse continued the night for Team Legend by taking on “Love on the Brain.” John thought this would be an opportunity for Kim to return to a more modern song that still has classic roots. Kim earned the first standing ovation of the night with Blake leading the comments by being basically speechless over the power of her voice. Gwen said she saw on Kim’s face how great that song felt for her and considers her “underrated” up until now, describing this as a breakthrough moment for her. John agreed that it was a perfect match of a song to her vocal ability and called it a “thrilling” and incredible performance.

9:04 p.m. – Next up was Bryce Leatherwood for Team Blake and his version of “Sand in My Boots.” Coming from a small town, Bryce was able to relate to the song immediately and even shared footage of him having performed it before. Camila said that she never tires of his tone of voice and it sounds like butter. John said he performs with confidence and his voice always sounds at home in the songs he’s been singing. Blake said he believes that Bryce is still growing and that he continues to pull in new fans with every week.

9:16 p.m. – Last week Kique was saved in the live vote and so this week he rebounded for Team Gwen with the song “Call Out My Name.” Gwen thought it was a great way for him to show off the skills he has that make him unique in the competition. Unfortunately he wasn’t able to perform live so instead we were treated to a pre-recorded version of his performance from another location. John complimented the lower part of Kique’s range and appreciates his arrangement of songs because he makes them his own. Gwen called him and the performance flawless.

9:29 p.m. – Alum Jeremy Rosado was also on a live stream to cheer on Morgan Myles from Team Camila. The fans chose “Tennessee Whiskey” for Morgan, a song that represents the kind of country artist that she wants to be. John and Carson both thought Morgan’s performance felt like something from an awards show and John added that she’s been one of the most consistent artists of the season. Blake called it incredible and Camila said Morgan is “shining” on the stage with “superstar status.”

9:42 p.m. – bodie was able to close out Team Blake’s performances with his rendition of “golden hour.” bodie liked that the song has emotional elements, but also incorporates rapping moments as well. Camila said she felt “star struck” when he walked to the stage because she considers him to be different from everyone else and “such an artist.” Gwen agreed that bodie has his own lane and is impressed by his voice because it has alternative sounds, but also more than that. Blake called the song harder than what anyone has ever tried on the show before and then called it the greatest performance he’s ever seen on the show.

9:53 p.m. – The last performance of the night was from Team Legend’s Omar Jose Cardona taking on “I Want to Know What Love Is.” John called the song choice special for him because it’s in his vocal range and gives him another opportunity to connect emotionally to the audience. Camila called it “euphoric” and suggested that he’s the only one that could pull off that song in that way. Gwen and Blake were excited to hear Omar sing that song and thinks that it was his most passionate performance thus far. John said that he was already an incredible singer, but now he’s becoming an artist that connects to people’s hearts and John feels that coming from him as an artist.