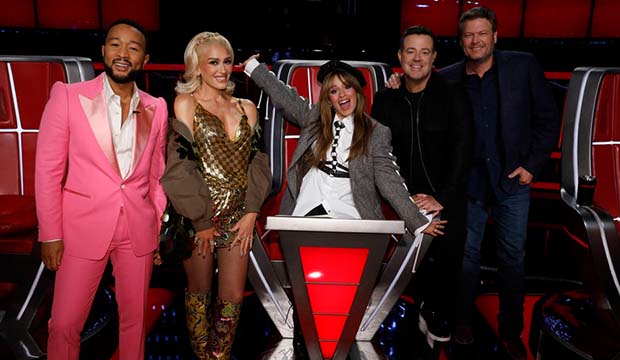 Tonight on “The Voice,” the top 7 artists are revealed as safe by America’s votes while the bottom three compete in the instant save. Coaches Gwen Stefani and John Legend each perform with their teams for the first time while Blake Shelton and Camila Cabello look on.

Below, read our minute-by-minute “The Voice” recap of Season 22, Episode 20 to find out what happened Tuesday, November 29 at 8:00 p.m. ET/PT. Then be sure to sound off in the comments section about your favorite artists on NBC’s long-running reality TV show, which coach you’re rooting for and who you think will ultimately join “The Voice” winners list for this 22nd season. Carson Daly hosts the Emmy-winning program. Here are the current team breakdowns:

8:00 p.m. – “Previously on ‘The Voice‘!” The top 10 performed songs selected by their fans in hopes of reaching the top 8. Who will be eliminated? And who will move one step closer to winning the Season 22 trophy? Let’s go!

8:01 p.m. – John Legend opened the show with a performance of “The Weight” alongside Parijita, Kim and Omar.

8:06 p.m. – Carson brought out the top 10 artists to deliver the first set of results for the night. He announced that both bodie and Morgan Myles are safe and moving on to the top 8.

8:11 p.m. – Next Carson revealed that Omar Jose Cardona and Justin Aaron are also safe and will sing in next week’s semi-finals.

8:18 p.m. – Gwen Stefani also took the stage for a rendition of “Burning Down the House” with Justin. Kique was still tuning in from another location so he wasn’t a part of the performance.

8:22 p.m. – Plugging their upcoming new show that takes place at Blake Shelton‘s bar in Nashville, he and Carson hosted a round of “Barmageddon” with the other coaches. In the game, Camila Cabello and Blake were on one team and John and Gwen were on the other in what amounted to shuffleboard with beer kegs. Gwen and John won by a score of 6-3, beating Blake at his own game.

8:28 p.m. – In the next set of results, Carson revealed that America’s vote pushed Brayden Lape through to next week’s shows.

8:34 p.m. – The last two artists that advanced straight to the top 8 were Parijita Bastola and Bryce Leatherwood.

8:41 p.m. – First to perform for the instant save was Rowan Grace with “Landslide.” Blake said that Rowan performs songs as if she wrote them and that when she’s on stage it’s “like a Grammys performance.”

8:45 p.m. – Kique sang “River” for his chance at earning the save for a second week in a row. Gwen called Kique’s uniqueness a rare occurrence on the show because he expresses his personality through his voice.

8:48 p.m. – Kim Cruse closed out the night’s final performances with “Believe.” John pointed out that all four coaches stood in ovation for Kim, calling it spiritually moving because of the “soul and warmth” that her voice has.

8:59 p.m. – The artist that was saved in the instant vote and joining the top 8 next week was Kim! That means both teams Blake and Legend will have three artists singing while teams Camila and Gwen will move forward with only one artist each.