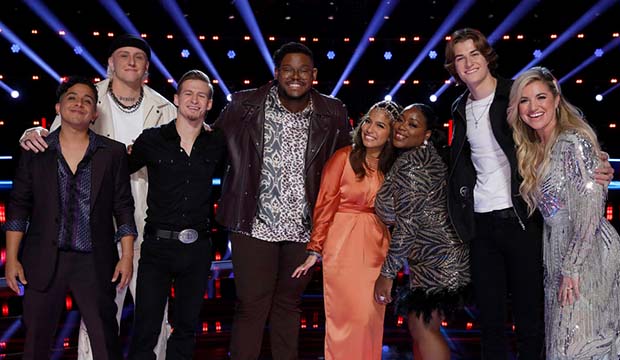 Tonight on “The Voice,” the top eight artists perform individual songs and Whitney Houston duets in front of coaches Camila Cabello, John Legend, Blake Shelton and Gwen Stefani for their chance at a spot in the finale.

Below, read our minute-by-minute “The Voice” recap of Season 22, Episode 20 to find out what happened Monday, November 28 at 8:00 p.m. ET/PT. Then be sure to sound off in the comments section about your favorite artists on NBC’s long-running reality TV show, which coach you’re rooting for and who you think will ultimately join “The Voice” winners list for this 22nd season. Carson Daly hosts the Emmy-winning program. Here are the current team breakdowns:

SEE Whitney Houston 35 best songs ranked: Hits include ‘I Wanna Dance with Somebody,’ ‘My Love is Your Love,’ ‘I Will Always Love You’ [PHOTOS]

8:00 p.m. – “Previously on ‘The Voice‘!” The top 8 were revealed and two contestants were eliminated after America’s vote. Kim Cruse (Team Legend) won the instant save and Kique (Team Gwen) and Rowan Grace (Team Blake) were sent home. Tonight the top 8 will sing for America’s vote. The top 5 finalists will be revealed on Tuesday’s live elimination episode. Let’s go!

8:01 p.m. – As a special treat for the top 8 solo performances, Carson announced that pairs of artists would also perform Whitney Houston songs in support of the upcoming film “I Wanna Dance with Somebody.”

8:02 p.m. – First up in the solo performances was Team Gwen’s finalist hopeful Justin Aaron with “Stand Up.” During rehearsals, Gwen helped Justin bring more drama to the performance, stressing that this is a time of year and part of the season where he has the opportunity to really connect with the audience from a pure place. John thought Justin showed a different power to his voice and all of his passion. Blake said that he loves how Justin’s performance grow in energy and he’s always surprised at where he can take a song. Camila said that Justin sets “an impossible bar” for himself, but that he gives everything he has into his performances. Gwen thinks that America is invested in watching Justin grow and that she’s impressed with what he’s accomplished.

8:14 p.m. – The first duet of the night was from Morgan and Bryce with their version of “Saving All My Love for You.” They called it a “Southern country, bluesy twist” of an arrangement that had then sitting center stage on stools singing to one another.

8:21 p.m. – Brayden Lape kicked off the night for Team Blake with “In Case You Didn’t Know.” Blake advised Brayden to “lean into this vocally” because it’s the semi-finals and he’s up against really strong vocalists. Camila was excited for the performance, saying that Brayden has the gorgeous, subtle kind of voice that can be as impactful as the bigger voices. Gwen appreciated how understated he is as a performer because it makes him lovable as an artist. Blake pointed out that Brayden stepped up his vocal this time around with the note he hit at the end.

8:33 p.m. – Team Legend hit the stage finally with Parijita Bastola‘s rendition of “Unstoppable.” John liked the song choice because of its empowering message that Parijita says speaks to the resilience that her family showed in moving to America. The performance earned the first standing ovation of the night. Camila said it takes guts and courage for her to own herself on stage. Gwen added that it’s shocking how she’s able to connect her voice, body and heart so tightly for her age. John said that Parijita’s belief in herself inspires people to believe in her, too.

8:44 p.m. – The next duet came from Brayden and bodie with Whitney’s “I Wanna Dance with Somebody (Who Loves Me).” Their arrangement of the song was a mid tempo, guitar ballad that kept the vocals in a simple range that they could both match.

8:48 p.m. – For Kim Cruse‘s semi-final performance she tackled “Summertime.” Both she and John thought it was the perfect song to represent what they might see at a Kim Cruse show, but they worked with he band to add some “Texas spice” to it. Blake mentioned that her switch into her head voice was incredible and he likes the steamy, sultry style on her. Camila backed Blake up, saying that if that’s what her concert is going to be like then she wants to go. Gwen called the performance “perfect,” including how she built the song and her spirit performing it. John closed out the comments by saying it was “divine,” emphasizing her regal presence and that her notes were well- placed and intentional.

9:01 p.m. – We continued with Team Legend performances with Omar Jose Cardona‘s version of “My Heart Will Go On.” John called it an unexpected song choice, but eventually Omar brought him around to his vision. Roaring with cheers, the coaches and audience stood in ovation for Omar for an extended amount of time. Blake made the joke that Omar’s performance made the stage levitate and wigs fly off the heads of viewers at home. Gwen was just as shocked at the vocal ability on display and John concluded by exclaiming about Omar rises to every challenge in front of him.

9:13 p.m. – In rehearsal with bodie of his song choice “Without Me,” Blake underscored how much knowledge and talent that bodie has in producing music. The song is the first time this season bodie’s taking on a song by a female artist. It’s one he sees as a tribute to his family the he hopes is inspired by him despite his time away from them. Camila said she loves that he makes every song his own, calling him a true artist. John called him one of his favorite performers this season and he sees the path that bodie can achieve immediately following the show. Blake predicted that bodie will be in the finale and called the amount of talent he has “absurd.”

9:24 p.m. – When Justin and Omar returned to the stage it was for “The Greatest Love of All.” They were determined to make Whitney proud with their version, despite Justin being worried that Omar’s voice can withstand her big vocals more than his.

9:32 p.m. – Top 8 performances continued with Bryce Leatherwood‘s “If Heaven Wasn’t So Far Away,” a song he’s excited about because it remembers the people we’ve lost and cherishes the ones we haven’t. Gwen was moved by how excited Bryce’s performance made Blake, calling Bryce everything you’d want to see in a country artist. John complimented Bryce’s tone and how he sounds like he is radio-ready. Blake also predicted Bryce to make the finale, saying that he “engaged the army of country music fans” with that performance because he’s the kind of artist they want representing the genre.

9:45 p.m. – The last duet of the night was from Parijita and Kim on “I’m Every Woman.” They said they felt deeply connected to the song and it is their opportunity to represent women everywhere.

9:52 p.m. – Closing out the night was Morgan Myles with the tribute of “Always Remember Us This Way” to her cousin and grandfather who both passed due to brain cancer. Camila wanted to shine a light on the parts of her voice and song that Morgan could distinguish herself from the Lady Gaga version that everyone knows. Gwen called her tone beautiful and said she loves how she builds her songs. Camila agreed with Gwen that Morgan has grown a lot in the competition and that there’s something magical about her performances that have truth and grit to them.