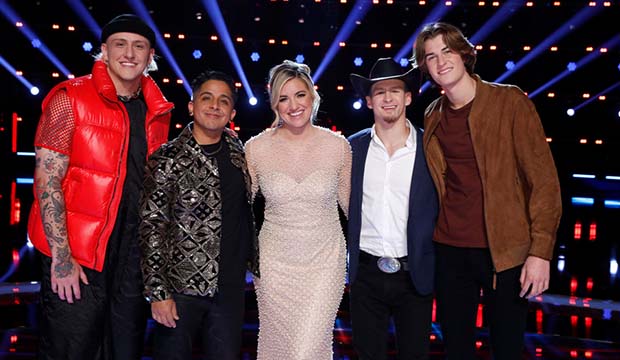 Tonight on “The Voice,” the top 5 artists perform a ballad and an up-tempo song in front of coaches Camila Cabello, John Legend, Blake Shelton and Gwen Stefani. Whoever earns the most votes across America will be named the Season 22 champion.

Below, read our minute-by-minute “The Voice” recap of Season 22, Episode 24 to find out what happened Monday, December 12 at 8:00 p.m. ET/PT. Then be sure to sound off in the comments section about your favorite artists on NBC’s long-running reality TV show, which coach you’re rooting for and who you think will ultimately join “The Voice” winners list for this 22nd season. Carson Daly hosts the Emmy-winning program. Here are the current team breakdowns:

SEE Who deserves to win ‘The Voice’ season 22? Let your voice be heard! [POLL]

8:00 p.m. – “Previously on ‘The Voice‘!” The top eight artists were cut down to five before tonight’s live finale. The elimination of Justin Aaron, Parijita Bastola and Kim Cruse brought Team Legend down to a single finalist and left Team Gwen completely unrepresented. Now the top 5 perform for “The Voice” trophy and the $100,000 prize. Let’s go!

8:02 p.m. – Carson informed us that the format for the finale would be two performances from each artist: one that is a thank you to the people and places that mean the most to them and one that is uptempo and showcases what kind of artist they want to be. bodie kicked off the night with “Late Night Talking” for his uptempo pick. Blake liked the pick because it’s a fun, contemporary song that is a change-up from what bodie has done in past weeks. Camila respects that bodie approaches his music with a producer’s brain and Gwen called out the big note he held tonight as a surprise that reminds them how much he’s capable of. John said bodie has a vision of what he wants to be as an artist and he finds it compelling. Blake said that he’s natural at everything he does and called him an “incredible freaking vocalist.”

8:11 p.m. – As a special finale treat, the four coaches took the stage for a holiday themed performance of “The Christmas Song.”

8:15 p.m. – For her first performance of the night, Morgan Myles went with “Total Eclipse of the Heart” because of the similarities to Bonnie Tyler’s voice as well as how big it is, making it perfect for finale night. Gwen called the song choice perfect for explaining who she is an artist and thinks it fit her voice well. John mentioned “the crackle” in Morgan’s voice that he loves and Camila said that the performance made her want to cry.

8:33 p.m. – Brayden Lape dedicated “Humble and Kind” to his hometown in Michigan, telling everyone back home that he’s lucky to have grown up there. Gwen told Brayden that she always believed in a special quality that he has. Blake countered that he’s not surprised to see Brayden in the finale, pointing out that he’s followed his heart and he’s been genuine and talented throughout the competition.

8:44 p.m. – For his dedication song, Omar Jose Cardona performed “The Way You Make Me Feel” in honor of his family that he explained has supported him through his dreams and a brother that pointed him in the direction of musical theater. Camila said it was fun to see Omar “expand” on stage into a new area of performer and John said his vocal remained perfect despite all the dancing that he did on stage tonight.

8:54 p.m. – In his first performance of the night, Bryce Leatherwood dedicated “Don’t Close Your Eyes” to his home state of Georgia for being the place he longs for and the place he comes from. Gwen said his performance was “so beautiful and so perfect” and that if he doesn’t win the show he certainly just won himself a career. Blake was proud of him doing that song because he introduced the music to a whole new generation of country fans.

9:04 p.m. – Brayden’s second performance was “Wild as Her,” a song written and performed by two “Voice” alumni. Blake maintains that Brayden has grown more than anyone else on the show and that alone makes him deserving of his spot in the top five. John called Brayden’s experience on the show “incredible” and said that it’s the start of his career as a singer. Blake liked that the format of the finale forced him to do something uptempo to get him out of his comfort zone of ballads.

9:18 p.m. – Morgan wrote her letter of gratitude to her parents for their endless support and sang “Girl Crush” in thanks to them. Gwen thought it was a great choice of song and thinks the country sounds really good on her voice. She pointed out the tender moments and the big belting, which John echoed in his recognition of her versatility. John went as far as calling Morgan the best country singer he’s seen since he’s been on the show. Camila pointed out that she’s always been a country vocalist and that it’s important to realize that she’s stepped out of that box because she’s authentic.

9:30 p.m. – For his final song of the competition, Bryce went with “T-R-O-U-B-L-E” which Blake thought was the perfect chance for him bring in another angle to his classic country feel. Camila said the performance was “so fun” and she loved hearing his voice in the quick rhythmic parts of the song. John said the uptempo track was a great pairing to the warm, buttery tone that he usually displays on stage. Blake challenged everyone to think that Bryce “raised the roof” on a season that has been defined by artists with really big vocal range.

9:40 p.m. – As a father, bodie dedicated his finale ballad “Gratitude” to his kids and all the way they inspire him. Gwen tried her best to articulate what she called a “super power” in bodie that intrigues and inspires people. John called bodie a leader and powerful enough to move people with his voice. Blake said he was speechless and called it one of the most moving performances he’s seen on the show in a long time.

9:52 p.m. – Omar closed out the final performances with “Somebody to Love,” a song that both John and Carson referred to as a “final check in the box.” Omar said that fans have been waiting for him to sing Freddie Mercury and so this felt like the right time for him to do it. Camila expressed gratitude to Omar for existing, saying that she’s inspired by him and he deserves success. John made a plea to America that there’s nothing else he could have done to be the voice of the season. He ended by saying he’s honored and that Omar has a special spirit and immense talent.