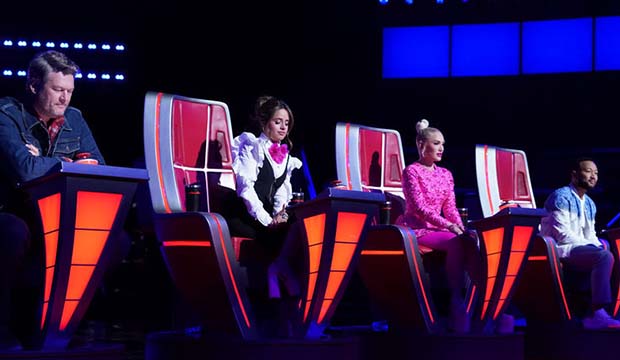 “The Voice” Season 22’s blind auditions continued on September 27 with Blake Shelton, Camila Cabello, Gwen Stefani and John Legend all continuing to build their teams. Over the course of the first three episodes, all but Blake utilized their blocks. Did the cowboy use that to his advantage tonight? And which coach recruits the evening’s only four-chair artist?

Below, read our minute-by-minute “The Voice” recap of Season 22, Episode 4 to find out what happened Tuesday, September 27 at 8:00 p.m. ET/PT. Then be sure to sound off in the comments section about your favorite artists on NBC’s long-running reality TV show, which coach you’re rooting for and who you think will ultimately join “The Voice” winners list for this 22nd season. Carson Daly hosts the Emmy-winning program. Here are the current team breakdowns:

8:00 p.m. – “Previously on ‘The Voice’!” In Episode 3, Camila and John split the two most sought after singers of the night — four-chair turns Andrew Igbokidi and Morgan Taylor, respectively. Camila’s team is filling up fast with eight artists so far. Each of the other coaches has six artists on their roster. Who will they recruit tonight? Time to find out!

8:10 p.m. — Tanner Howe is a 29-year old from Huntington Beach, California who is most excited about Camila being a coach. He’s singing Shawn Mendes‘ “Mercy,” hoping he can get at least one chair to turn. He is consistently gigging around the Los Angeles area but aspires to take his career to the next level. It takes a couple of verses, but eventually Blake turns his chair followed by Gwen and John. Camila thinks Tanner sounded too much like Shawn and hopes he will find his own sound with whoever he chooses as a coach. Tanner chooses to join Team Gwen! Blake says John’s insistence on fighting with him derailed both coaches.

8:20 p.m. — The next artist thinks the coaches will be slightly surprised when they turn around. The artist is singing . Camila turns first, unable to suppress her intrigue. Gwen is next and the artist is revealed to be Sydney Kronmiller singing “Latch” by Disclosure. I didn’t find her voice so shocking, although it is unique and one of the standouts this season. Sydney is a 25-year old from Ogden, Utah who shares a difficult story about her parents’ divorce and her mother’s alcoholism. Thankfully, her mother has recovered and is fully supportive of her career now. After giving it much thought, Sydney chooses to join Team Camila!

8:30 p.m. — Tanner Fussell is a 28-year old landscaper from Nashville. He’s living life to the fullest after his best friend and former bandmate was killed in a car crash. Tonight he’s singing “Anymore” by Travis Tritt. It’s a great song choice, but the vocals are just average. Blake is the only coach to turn his chair and it’s a no-contest recruit for the cowboy’s team. Next we see a quick clip of Blake snagging another one-chair turn in Eva Ullman singing “Light On.” Blake is shocked nobody else turned around and he’s determined to remind everyone he’s the king of “The Voice” this season.

8:35 p.m. — Emani Prince is a 22-year old professional wrestler from Fort Gaines, Georgia. He’s a big man who loves to be mean in the ring, but in real life he’s “the sweetest person ever.” Emani says he plays a character in the ring, but when he sings he’s completely himself. He likes to express himself on stage because he’s a vibrant, flamboyant person. He’s singing “All My Life” by K-Ci & JoJo. I love Emani’s style and the fact that he’s authentic. Unfortunately his voice is a little inconsistent. It’s powerful, yet pitchy. Nobody turns around for Emani, bringing him to tears. Gwen walks over and gives the gentle giant a hug. They remind Emani that this isn’t his only shot at achieving his dreams before sending him on his way.

8:45 p.m. — Kayla Von Der Heide is a 30-year old from Bisbee, Arizona. Tonight she’s singing “Jealous Guy” by John Lennon. Gwen quickly turns her chair followed by John. Kayla has one of my favorite voices of the season. It’s a tone you can’t mistake and it feels a little rock and roll. I’m surprised she’s only a two-chair turn. Gwen calls her a mix between Fiona Apple and Stevie Nicks. John wants to drink hot chocolate and whiskey while he listens to Kayla sing. After giving it some thought, Kayla decides she’s best suited for Team Gwen! Next we see a brief clip of Destiny Leigh singing “A Song For You” and joining Team Gwen (uncontested) before Eric Who comes out singing “bad guy” and joins Team Camila.

9:00 p.m. — Parijita Bastola is a 17-year old from Severna Park, Maryland. She has grown up watching “The Voice” and pretending she was on it. Her family is originally from Nepal and that’s important to who she is as an artist. Tonight Parijita is singing “Jealous” by Labyrinth. John is first to turn around followed by Camila, Gwen and then Blake. It’s a four-chair turn! She’s a little a powerhouse with a pretty tone. The coaches are shocked to hear she’s only 17 years old. After an extended fight among the coaches, Parijita joins Team Legend, giving a John a major feather in his cap this season.