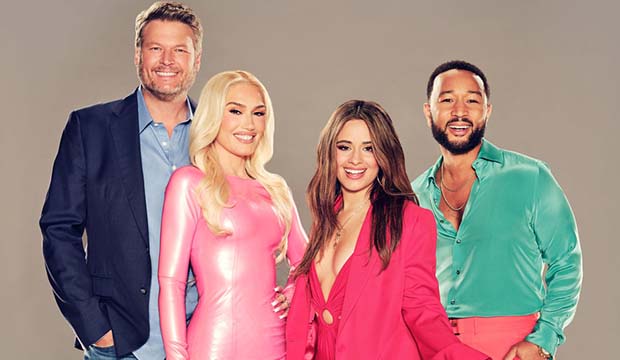 “The Voice” Season 22’s blind auditions continued on October 4 with Blake Shelton, Camila Cabello, Gwen Stefani and John Legend all continuing to build their teams. After five episodes, all of the coaches have used their block button as they work to recruit teams of 14 artists. How will things play out tonight?

Below, read our minute-by-minute “The Voice” recap of Season 22, Episode 6 to find out what happened Tuesday, October 4 at 8:00 p.m. ET/PT. Then be sure to sound off in the comments section about your favorite artists on NBC’s long-running reality TV show, which coach you’re rooting for and who you think will ultimately join “The Voice” winners list for this 22nd season. Carson Daly hosts the Emmy-winning program. Here are the current team breakdowns:

8:00 p.m. – “Previously on ‘The Voice’!” In Episode 5, Blake won over the most sought after singer of the night — four-chair turn artist bodie, a 29-year old from Ladera Ranch, California. Each of the coaches now has 11 artists each. What new talent will they discover tonight?

8:10 p.m. — Austin Montgomery is a 19-year old from Hemet, California. He describes himself as an old soul who likes classic cars and legendary tunes. He just started playing music two years ago, influenced by the likes of Elvis Presley and Johnny Cash. Tonight he’s singing “I Can’t Help It (If I’m Still in Love With You)” and Gwen almost instantly turns around. Blake and Camila follow suit to fight over this artist. I really can’t see Austin surviving for long in this competition, but it’s a fun ditty. Austin chooses Blake to be his coach, an obvious pairing that couldn’t be denied.

8:20 p.m. — Dia Malai is a 26-year old from Queens, New York who comes from a big family she calls “Malai Mafia.” She would love for John to turn around because the first song she heard her dad sing was a John Legend song. Sadly, Dia’s father passed away last year due to COVID-19. Tonight Dia is singing “Real Love,” immediately energizing the crowd and getting a chair spin from John. Dia gets better and better as this song goes on, but nobody else turns around. With so few spots left, coaches are getting picky. Nevertheless, Dia is on Team Legend!

8:30 p.m. — The Little Miss is a 31-year old from Los Angeles, who thinks her real name, Hayley Johnson, is too boring to use as a stage name. For that reason she’s using her dad’s nickname he gave her when she was little. Her influences range from rock to crooners to country. She gave up being a performer full time, so she’s been teaching in recent years. Tonight she sings “You Were Meant For Me,” but none of the coaches turn their chair for her. Next, Benny Weag gets a brief clip shown of him singing “Shivers.” Blake happily turns for the Spanish singer, leaving the cowboy with just one spot left on his team.

8:40 p.m. — Jillian Jordyn is a 17-year old from Melville, New York singing “Issues” for her blind audition. Her voice is crystal clear and John wastes no time turning around, followed by Gwen. There are some pitch issues, no pun intended, which I imagine holds back Blake and Camila. The teenager is excited just to be on the show and picks Gwen as her coach.

8:50 p.m. — Hanny Ramadan is a 23-year old from Voorhees, New Jersey. He’s a first-generation Muslim-American whose family moved here to avoid war in Lebanon. Hanny’s father has some musical skills and one day he bought his son a starter guitar. His mother gets emotional when she thinks about how hard Hanny has worked towards his passion. Tonight Hanny is singing “Round Here” while simultaneously playing guitar. I barely recognized the song because of Hanny’s non-traditional version. I’m really not sure I like it, but Hanny has a cool, gravely rock voice. Unfortunately, none of the coaches are sold and refuse to turn around. Gwen said the arrangement blocked the emotion of the song.

9:00 p.m. — Grace Bello is a 21-year old from Lacey, Washington who is of Cuban heritage and excited to see Camila as a coach this season. She grew up listening to a lot of Spanish music and opera, but loves pop music. Tonight she has rearranged Justin Bieber’s “Ghost” into her own style and John turns his chair quickly. Blake is next followed by Camila and Gwen. It’s a four-chair turn! There’s a long, drawn-out battle between the coaches over Grace, but she ultimately decides to join Team Camila.