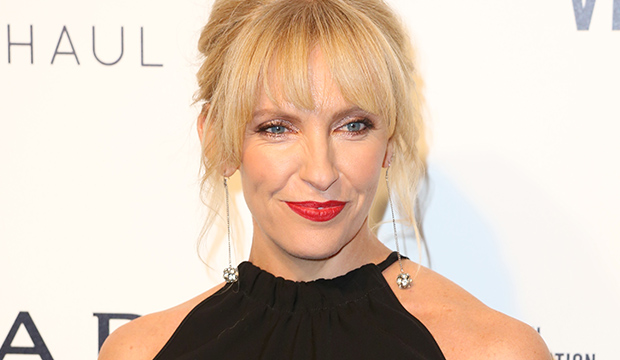 It would be a shame if Emmy voters overlooked Toni Collette’s subtle yet incisive performance in HBO’s “The Staircase.” Like William Holden in “Sunset Boulevard,” she has the tricky responsibility of making viewers care about a character who is already dead when the story begins. As Kathleen Petersen, corporate executive, devoted mother of some seriously feckless adult children and wife of novelist Michael Petersen (Colin Firth), Collette movingly shows how a multitasking modern career woman reacts when the scales fall from her eyes about her long-term marriage to a man who spends his free time watching gay porn on the Internet, having anonymous sex with men in sex shops and lying through his teeth about these closeted activities.

Early on in “The Staircase” Kathleen gathers the family together for Christmas, a celebration that includes the wearing of holiday-themed sweaters and drinking wine from a very large chalice-like cup while her children — two of which are adopted — pay tribute to each other and their parents. It’s a touching moment that contrasts dramatically with the gathering of gruesome forensic evidence of Kathleen’s death at the bottom of a staircase.

Was she pushed? Did she fall after drinking too much wine at poolside with her ho of a husband?

Collette is such a virtuoso that she reenacts Kathleen’s death three times as different theories about her demise are explored. The second theory is the most convincing. Having left her laptop at work, Kathleen goes into her husband’s office to retrieve an email from the office about an upcoming business trip to Toronto. There she finds Michael’s stash of porn and blows her top, deciding to leave him. With Kathleen supporting her husband and her feckless children on her hefty corporate salary, Michael can’t let that happen. He attacks her on the staircase in a fit of rage and then stops himself once he sees the blood all over the walls and Kathleen’s loss of consciousness. Then he waits and waits to call 911, which arouses police suspicions. The rest of the story is fairly direct. Michael is found guilty and receives a long prison sentence.

Collette won an Emmy for Best Comedy Actress in 2009 for Showtime’s “The United States of Tara,” playing Tara Gregson, who juggled multiple personalities. She resurfaced on TV in 2019 with an excellent featured role as Grace Rasmussen, a jaded detective investigating a serial rapist on the limited series “Unbelievable” and earned an Emmy nomination.