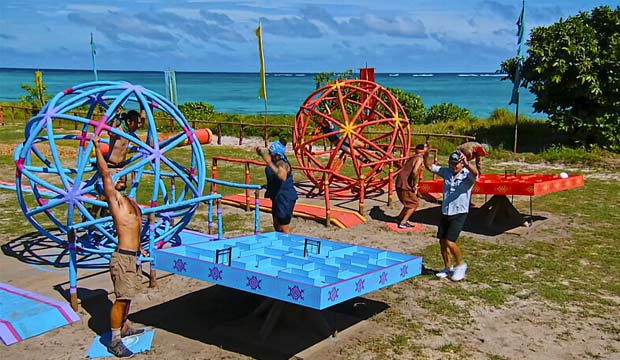 The 12th episode of “Survivor 43” aired on Wednesday night and concluded with host Jeff Probst snuffing out the torch of Cody Assenmacher. The 35-year old from Honolulu, Hawaii was sent packing and became the sixth member of the jury. Did the tribe make the right decision by voting Cody out? And what were the dumbest, most shocking and most exciting moments of the last episode?

1. Post Tribal Shenanigans: The name of Sami Layadi was still on the lips of the remaining contestants but Owen Knight was very much aware that a bigger move was needed to separate the power duo that is Karla Cruz Godoy and Cassidy Clark. An astute Karla, when confronted by Cassidy, turned on the emotions. Jesse Lopez seemed quite unbothered by all of this and told Cassidy the truth. In the eyes of Karla and Cassidy, a target had been placed.

2. Let’s Get the Ball Rolling: Separated into teams, the castaways were thrust into a very well-rounded reward challenge. The team of Owen, Karla, and Cody faced off against the team of Mike Gabler, Cassidy, and Jesse in what looked like a lot of fun. Unless your name is Cassidy, whose blood pressure must have been sky high as she tried to instruct her teammates on how to navigate the giant red ball. Owen was much more skilled at instructing his team. The odds were evened when both teams made it to the giant maze and neither group was particularly skilled there. Owen was eventually able to coach his team to victory.

3. A Delicious Reward and Lack Thereof: Cody was extra happy about winning the reward but kept his eye on the prize, so to speak, as the trio talked gameplay. Karla faked tears and easily fooled the guys. The losing trio also spoke strategy with Mike leading the conversation. By the time that the winning trio arrived back, talk of flushing idols became prevalent. Honestly, it’s about time someone played one. Cody’s confidence was just a bit much for me, though, since he was acting like he had no worries in the world.

4. Immunity Time: If the Reward Challenge looked fun, the Immunity Challenge looked a bit like something straight out of my nightmares. In all honesty, everyone did a really commendable job at this particular challenge. Jesse quickly jumped from last to first, which was awesome to see since challenges are not exactly his strong suit. The puzzle part of the challenge was oddly captivating since it was a bat and looked pretty difficult. Karla had a rough go of it and Cassidy eventually won immunity, setting up a very interesting tribal council to say the least. They had idols to flush and egos to burst.

5. Chaos and a Tough Decision: There is just something about this tribe at tribal council that is just captivating to me since one really never knows what will happen. Owen and Mike were not exactly thrilled by the potential outcome of either of them having their torch snuffed. Karla and Cody playing their idols leaves only a few options at the end of the day. Cody planned on tricking Karla and getting her out of there while Jesse clearly had something else on his mind — as he viewed some contestants not taking the competition as seriously has he did. The idea of voting out Cody suddenly became a somewhat viable option if the stars were to align in the right manner. The biggest vote of the season? Maybe. All we knew for certain is that Cassidy was safe with multiple scenarios being floated throughout the course of the day. The jury seemed pretty happy when the remaining contenders walked in, for what reasons I do not know but one can assume it’s the fact that some big threats were in danger. Jesse wasted no time stating that Karla and Cody were planning to use an idol. Overall, the “apex predator buffet” at camp resulted in quite a spirited discussion before votes were even cast. When asked about playing an idol, Jesse turned the game upside down and played an idol for Owen. This prompted Karla to play her idol for herself. Cody realized the outcome of the situation and was not pleased whatsoever. Jesse just got a huge addition to his “Survivor” resume. Cody even had to acknowledge that it was great gameplay. As Niall Ferguson once said ““No civilization, no matter how mighty it may appear to itself, is indestructible.” The same can be said for the game of ‘Survivor’ no matter how well you played throughout the game. Fingers crossed we see him again on a future season!