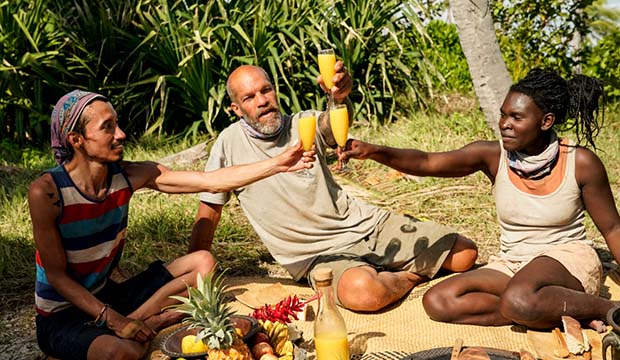 The “Survivor 42” finale aired on Wednesday night and concluded with host Jeff Probst declaring Maryanne Oketch the winner. The 24-year old from Ajax, Ontario defeated Mike Turner and Romeo Escobar after swaying the jury to believe she was most deserving of the $1 million prize. But what were the other highlights from this season finale?

Below, read our “Survivor 42” Episode 13 Top 5 moments. Then be sure to sound off in the comments section about your favorite castaways on CBS’s reality TV show, who annoys you the most and who you think will ultimately join the “Survivor” winners list and take home the $1 million grand prize.

1) The Excitement of Jeff Probst: Starting the show with Jeff on a beach with unbridled excitement was brilliant. That is a man that clearly loves his job and has no fatigue whatsoever. That’s just one reason we love him.

2) The Final Advantage Clue and The Aftermath: As if the castaways did not have enough to deal with, let’s make them solve an anagram! Talk about cruel and unusual torture. Lindsay Dolashewich figured it out first and ran around like a chicken without its head. Then the lightbulb moment occurred and she found it, having a reaction that was extremely emotional…only to gain a slight advantage in the next challenge. To the surprise of absolutely nobody, Jonathan was once again a natural at the next challenge, since he apparently was created by the “Survivor” gods in a lab somewhere. The puzzle itself looked fun, yet incredibly annoying. In the end, Mike won the challenge. Jonathan joined him on the reward aspect and the complainers of the finale got to sit there and be miserable together. The personification of misery loves company for sure. Meanwhile, Mike and Jonathan targeted Lindsay with the remaining three targeting Jonathan. This is why you do not keep a challenge beast like either of them until the finale ladies and gentlemen. They make last minute bad decisions like groveling at the feet of Mike. The result at tribal was exactly what I expected, but it became very evident who was next on the chopping block.

3) My Favorite Challenge of All Time: There is no level of excitement like watching the castaways catch a ball going down a metal race track. This needs to be mass produced so people can own it at home. It jut strikes me as being a blast to do! Anyways, after a brief conversation where Maryanne became highly emotional, the challenge commenced. Much to my surprise, Romeo reigned supreme.

4) Burn Baby Burn: Upon the return to camp, Mike read the room and tried his best to save himself. He also sneakily and unwittingly threw Jonathan under the bus in the process. So, as we watched people make fire out of fear, the one person who does not deserve to be anywhere near the top three sat there with an immunity necklace. Mike seemed resigned to his fate of making fire as did Jonathan and lo and behold they had to do just that! With great sadness, I must report that Jonathan was indeed the loser of this challenge and joined the jury. But there is no doubt in my head that we will see him again on an All-Star season. More importantly, Jonathan did not seem to really be bothered by the loss, which proved that he indeed is a class act.

5) Three Distinct Ways to Win and Lose Votes: Let’s be completely honest here, there are so many ways to get to the end, but when one gets there they often screw it all up by not being able to answer questions. Plus, after Omar Zaheer’s opening statement….well anything else seemed tame. When answering Tori Meehan, Maryanne fared the best with Mike a close second. Romeo failed miserably and admitted to gas lighting. Yes, he owned that, but not the brightest thing to say to the people you want to get a million dollars from. Mike semi-owned up to his social game but not entirely, which was both a blessing and a curse at the end of the night. Mike’s defensive nature and not owning up to his social game was a bad combination. Maryanne owned up to everything, gaining her points in the eyes of the jury. Round two was a lot better for all three and focused on the physical game of it all. Maryanne knew her physical strengths and owned it. Mike emphasized his enthusiastic nature of tackling anything necessary. Romeo played up the fact that he was new to physicality and his immunity win. The strategy questions is where the winner was ultimately decided in the end. The majority of the jury seemed very unimpressed by Romeo’s answer, unsurprisingly. Mike successfully emphasized his strategic game. Maryanne was the most successful in this round, rattling off a perfect example and a merge idol from her pocket, which shocked the jury. To paraphrase her answer, “I played each and every one of you and did it with a smile!” At that exact moment, I knew who won this season. Congratulations to Maryanne!

6) Winning Reaction: After having some time to come to terms with winning and presumably hugging everyone, Maryanne feasted on champagne and pizza. She knew what would get her jury votes and once she did that it was essentially smooth sailing. Watching the jury tell her how she successfully swayed them was a joy to see at the end. I do not know what I liked more, that or watching Mike hear that he could have won if he had not dropped the ball with the jury.

7) The Survivor 43 Preview: Season 43 premieres this Fall and we start this crazy journey all over again! It looks incredible! I already have a favorite contestant since anyone who says they want to win at all costs is already a fun person for the show.