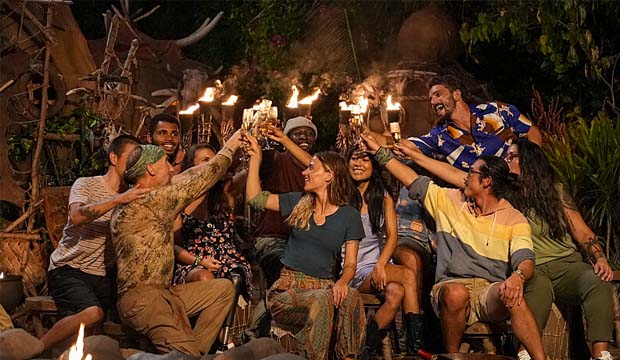 The season finale “Survivor 43” aired on Wednesday night and concluded with host Jeff Probst crowning a new millionaire in Mike Gabler. The 52-year old from Meridan, Idaho defeated Cassidy Clark and Owen Knight after swaying the jury to believe that he was the most deserving of the title of sole survivor. So for the final time this season, we look back at the dumbest, most shocking and most exciting moments of this memorable finale.

1. New Digs, New Advantage: Did I feel bad that the remaining contestants were sent to a brand new beach to start over? Heck no! After the elimination of Cody Assenmacher, each and every one of them was extremely confident in their own way. Normally, I applaud this but some of them were overconfident, especially Jesse Lopez, who had another idol ready to play in the game left untouched. He was a bit too smug in my opinion. When Mike discovered the advantage envelopes, suddenly this became the ‘Survivor’ equivalent of Wordle. Karla Cruz Godoy figured it out first and off she went, injury and all. Owen was not too far behind and ran like Usain Bolt to overtake her. The search for the advantage was close with Karla beating Owen to it by mere seconds. Needless to say, he was not happy and hacked away on a coconut, enraged, as the others observed.

2. The Opportune Time for Immunity…and Steak: The comparison to warriors at the Colosseum was an apt one since everyone had their game face on immediately. The reward was equally as exciting since sustenance normally equals success. They truly threw everything into this challenge, with the season nearing its end. Jesse was piloting the struggle bus for sure. He eventually made up the time, but that was a brutal start for him. Karla’s advantage didn’t seem to help her much at all. Everyone did their best to figure it out but Owen was especially gifted at the puzzle. Winning immunity, he cemented his spot in the final four and seemed to be in disbelief. Perfect timing to ask who would join him right? Off went Owen and Cassidy, to a feast which looked quite delicious. Plotting quickly began. With Jesse and Karla looming large as threats, the question really was “Who needs to go first?” A question that they should have asked weeks ago. That duo wanted Cassidy out, with Karla blissfully unaware that Jesse had an idol, or so it seemed. Karla gave her best one-on-one appeal to Mike and Owen, with Owen suddenly questioning the elimination order in his head. Finally someone that is looking at jury management! Cassidy was not buying any of Karla’s malarkey whatsoever. Karla basically ended up blackmailing Cassidy, and the former did not take this lying down. Cue the chaos at Tribal Council.

3. Tribal Council Shenanigans: The jury seemed happy that Owen won immunity. Jesse wasted no time to call out Karla on her shenanigans and the pan to Cody said it all. Jesse put his money where his mouth is and played his idol, with Jeanine Zheng in utter shock at the sight of the idol she so desperately needed to play during her last days as a contestant. Suddenly, there was a side conversation between Jesse and a desperate Karla that led to everyone hopping in on the conversations. Honestly, the only normal acting person at this tribal was Mike, who seemed completely unbothered. When all was said and done, Jesse’s idol was played and Karla was voted out. She seemed fine with having her torch snuffed and Owen seemed especially happy to see her leave.

4. One Final Immunity Challenge: Anyone else feel a bit sad that this was the last one of the season? This challenge was pretty amazing in terms of conception. The wind was especially breezy, which made this even more fun. Owen and Cassidy made a mad dash for the win, but in the end the wind ended Owen’s hope of back-to-back victories. An emotional Cassidy now had the power to decide who would make the dreaded fire in order to remain in the game. Owen wanted to face off against Jesse in the fire challenge for the sake of his game, which he believed could endear him to the jury. Jesse also had a plan and wanted Cassidy to make fire against him — but she had no interest.

5. Burn Baby Burn: Once more, the jury was glad to see the owner of the immunity necklace as she was indeed in “beast mode.” Jesse had no chill and tried once more to get Cassidy to make fire to no avail. Owen was chosen to join the final three, much to his disappointment or relief. His facial expression was a poker face. That left Mike and Jesse to fight for their lives in the game. Also worth noting, my gut feeling was correct. I am not sure who enjoyed watching the experience more, the two safe contestants or Ryan Medrano and Noelle Lambert. In the end, Mike did his job perfectly and vanquished the Jesse threat in the fastest fire to ever be made at this challenge. Jesse promptly broke down and only Mike was the positive reinforcement for him. Cassidy was not moved to do so whatsoever since this is “Survivor” and not a contest to make a best friend. She did note she needed him gone in order to win, so a compliment was given.

6. The Final Countdown: Owen was very aware that this particular jury would be a difficult group to sway. From the sound of it, the jury thought very highly of him as well. Mike seemed to leave the jury with more questions than answers. Cassidy on the other hand would clearly have a tough time winning over Jesse, who sounded very bitter. Jeff welcomed the trio of contestants to the final tribal, where they now had zero power, and we saw three different approaches to winning over the jury.

Mike: In regards to differentiating his game from the others, he admitted to being able to integrate himself with the various groups and alliances. It came across as endearing. In regards to the trust question, he noted that he was able to read people and even Jeanine had to give him his flowers for that. In the first area of questioning, Mike won people over with sincerity. In regards to the physical nature of the game, he was less vocal but did mention that he could have gotten taken out due to blowing a challenge. Mike brought the conversation back to his big move post merge as his ability to be convincing. My grade: A

Cassidy: Cassidy, speaking really fast, noted that her story was one of a fighter that would not quit until she was forced. Cassidy’s answer to a major move she made was solid but felt a bit stale. Her approach to explaining her assassin-like ability to target people was impressive. She also tried to direct more daggers at Mike but it backfired on her. Cassidy convincingly explained that her relationship with Karla at the end of the game was flawed. She also failed to make a strong case that she was a major aspect of Ryan’s demise.  My grade: B

Owen: Less convincingly, Owen played the underdog card, which he was for most of the game. When questioned about trust, he explained the whole plot to get out James Jones. Owen briefly explained the core alliance that he was in but in such a brief manner that it felt a bit like a canned answer. In regards to the physical aspects of the game, he quickly mentioned the last gasp and his final five immunity win as a highlight. He also struggled to handle the question by glossing over the whole James blowup. Owen had a few regrets but did not single them out. He noted that there was no vote that he was the big driver on but was a great team player. That answer won over James in particular. My grade: A

The jury then took on their huge role in this game. Watching the jury vote is always a nail bitter for me since one never knows who will vote for whom. When the votes were read, Mike was victorious to the shock of Cassidy and the delight of the jury.

7. Reunion Tidbits: Much like the previous season, the jury and finalists feasted on pizza and champagne as they fielded questions from Jeff. Mike surprised everyone with the fact that he was donating all the money to charity. It also became abundantly clear that he had indeed forged lasting relationships with his fellow contestants, which is rare for this show. Somewhere, millions of viewers had their hearts grow three sizes. His fellow contestants also had moments to shine.