“What kind of fresh hell is this going to be?” wondered Jo Chan, sitting on the sidelines for the last episode of “Last Chance Kitchen” for “Top Chef: Houston.” She was responding to the latest devious twist within a twist that was sprung on Jae Jung, who was just eliminated in “Dinner in Zero Gravity,” and Sarah Welch, who has been crushing it in an almost unprecedented “LCK” winning streak. So who won this episode and finally won a chance to return to the main competition? Watch part one of the episode above, and part two below.

Jae was eliminated for a dish made for astronauts but palatable to no one with mushy beef that fell apart and under-cooked barley. Her textures were off, so for their “LCK” challenge, Jae and Sarah were to make a dish highlighting three different textures: crunchy, creamy, and chewy. Sarah went to a familiar favorite, as she has done through most of her challenges: frying a ring of squash in crispy batter and adding a raisin relish and creamy chevre. Jae went with old reliable seafood: a  chewy shrimp boil with creamy potato emulsion and crispy celery pickles.

Here’s where twist number-one came in. Tom Colicchio had told them upfront that he would not be judging these dishes, but instead a group of five culinary experts would taste them blind. It turned out those experts were the five remaining “Top Chef” contestants: Ashleigh Shanti, Nick Wallace, Damarr Brown, Buddha Lo, and Evelyn Garcia. They weren’t told who made the dishes (they knew one had to be Jae, but they didn’t know who her “LCK” opponent was). They were simply given a blue card for Jae’s dish and a red card for Sarah’s. So it was all the more impressive that Sarah won in a unanimous decision. All five chefs picked red and were pretty stunned that Sarah was still alive having been eliminated way back in episode four, “Doppelgangers.”

SEELuke Kolpin on his ‘Top Chef” elimination: ‘I don’t know if anybody is ready to leave’

So Sarah’s back in the competition, right? … That’s where the fresh hell of twist number-two comes in. You see, the five “Top Chef” contestants weren’t voting on who would return to the competition. They were voting to determine how much time Sarah and Jae would have to cook in round two. Poor Sarah never knows when she gets to be done cooking. She’s going to develop “LCK” PTSD. The good news for her was that the unanimous decision gave her a big advantage. Each chef’s vote added three minutes to her clock, starting from a base time of 30 minutes. So she had 45 minutes to prepare her next dish (which could be anything she wanted), while Jae only had 30.

But having more time is a double-edged sword. While there’s more time to execute a dish and correct any mistakes, there’s also more time to overthink and over-complicate a dish, and higher expectations when the judges actually taste it. Nevertheless, Sarah knew it was time to go big because she needed to wow the judges in order to survive. So she decided on making ricotta gnocchi from scratch, which was especially challenging since the ricotta in the “LCK” pantry was wetter than she would have liked.

SEE‘Top Chef’ spoilers: Who had to pack their knives and go during Houston season?

After a long wait Jae was finally able to start working, and once again she gravitated towards the seafood that has served her so well in the competition thus far. This time she sauteed some snapper. But when Tom and guest judge Shota Nakajima (a “Top Chef” All-Star) tasted their dishes, there was a moment when I had a good feeling that Sarah had the winning dish. It was when Tom told her, looking like he was trying to contain his enthusiasm, “In my restaurant, Craft, we have made gnocchi for 20 years every single day. [Sarah’s dish is] good gnocchi.”

Indeed Sarah was named the ultimate champion, tying the record for the most wins ever in “LCK.” With the skill she demonstrated under tremendous pressure every week, I wouldn’t be surprised if Sarah wins the whole competition now.

'Top Chef' spoilers: Who had to pack their knives and go during Houston season? 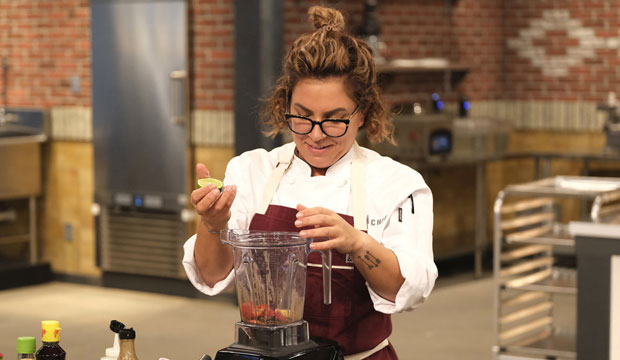