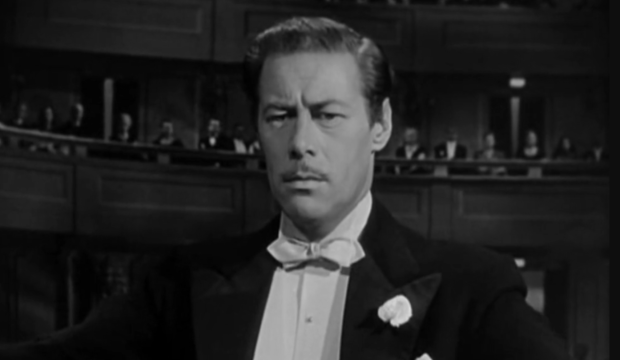 Cate Blanchett has received a symphony of praise from critics for her starring role in  Todd Fields’ “Tar”and as a strong-willed orchestra conductor. Lydia Tar speaks her mind whether making a fool out of a conducting student at Juilliard or threatening a young girl bullying her daughter at school. But Tar’s diva-tude has nothing on the Sir Alfred de Carter (Rex Harrison) the famed conductor with an ego as big as the Ritz in writer/director/producer Preston Sturges’ hilarious dark 1948 comedy “Unfaithfully Yours.”

Sturges had had an incredible run at Paramount with his brilliant comedies: 1940’s “The Great McGinty,” for which he won the original screenplay Oscar and “Christmas in July”; 1941’s “The Lady Eve” and “Sullivan’s Travels”; 1942’s “The Palm Beach Story”; and 1944’s “The Miracle at Morgan’s Creek” and “Hail the Conquering Hero.” But then came many clashes with Paramount executives, the 1944 critical and commercial disappointment with “The Great Moment” and his short-lived and disastrous partnership with Howard Hughes and another flop, 1947’s “The Sins of Harold Diddlebock” starring silent film star legend Harold Lloyd.

Jealousy is at the heart of “Unfaithfully Yours,” a theme Sturges had already explored in “The Lady Eve” and “The Palm Beach Story.” And Sturges himself was racked with jealousy throughout his life. According to “Preston Sturges” by Nick Smedley and the director’s son Tom Sturges, the filmmaker was a “man of double standards, was pathologically jealous of his wives, while reserving the right to philander widely himself.”

He was having an affair with the much-younger actress Frances Ramsden while making “Unfaithfully Yours.” She had been in “Diddlebock” and he wanted her to play Sir Alfred’ beautiful young wife Daphne in “Unfaithfully Yours” but Fox star Linda Darnell ultimately was cast.

According to TCM.com “Sturges would later admit that Ramsden drove him mad with her mercurial moods. When he went to visit her, he didn’t know whether to expect a kiss or a blow from the frying pain. Another sign of the director’s own problems with women is the line Harrison delivers when making love to his wife, ‘A thousand poets dreamed a thousand years, then you were born, my love,’ Sturges would tell his friends that was a line he used with several of the women in his life.”

Sir Alfred is always worrying if Daphne truly loves him. And his fears are heightened when his nerdy brother-in-law August (Rudy Vallee) hires a private detective to watch Daphne while Sir Alfred is in Europe. Though he refuses to listen to August or read the detective’s report, just the thought she could be having an affair with his handsome young secretary Anthony (Kurt Kreuger). And when he visits the private eye (Edgar Kennedy), who tells him Daphne spent nearly 40 minutes in Anthony’s bedroom one night, Sir Alfred transforms into a baton wielding Othello.

During his concert that night, he fantasizes how he can get rid Daphne and Anthony.  Zooming into his eye, a la Hitchcock, Sturges lays out Sir Alfred’s wacky plots. While conducting Rossini’s overture to “Semiramide,” Sir Alfred kills Daphne with his razor — okay, things get a bit dark here — and frames Anthony. While conducting Wagner’s “Tannhauser,” he becomes the ultimate gentleman giving Daphne her freedom. And during Tchaikovsky’s “Francesca da Rimini, Opus 32,” Sir Alfred challenges Anthony to a game of Russian roulette only to shoot himself with the first bullet. After the concert, he rushes home to prepare for his ingenious, flawless murder of Daphne but nothing goes right.

Sturges’ comedies are seamless mixture of sophisticated dialogue and slapstick. And Harrison, who was known as “Sexy Rexy,” seems to be having a field day with not only the rapid-fire dialogue (“Well, August, what happy updraft wafts you hither?”) but also the physical comedy. Harrison really threw himself into the role by studying conducting. He became so proficient that the studio musicians, who appeared in rehearsals and on screen, told Harrison that they could follow his baton.

Vallee, who got to show his comedic chops in “The Palm Beach Story,” is equally a hoot as Sir Alfred’s milquetoast of a brother-in-law. But it’s “Slow-Burn” Buchanan who steals the film as the private detective Sweeney who is obsessed with Sir Alfred. And in fact, Buchanan delivers the best lines in the film “You handle Handel like nobody handles Handel. And your Delius-delirious!” (“Unfaithfully Yours” was Buchanan’s penultimate film. He died at 58 a month before “Unfaithfully Yours” opened.)

By all reports, “Unfaithfully Yours” was a fun set. According to TCM.com. Sturges wore a red fez, so, he claimed, people “could find him better. Between shots he raced from one part of the soundstage to another, alternately coaching actors on their readings of his meticulously crafted lines, banging out jazz tunes on a nearby piano or joining cast members in impromptu barbershop quartets.” The film received good reviews in the big cities, but tanked with audiences. The movie’s release had been delayed because of the scandal earlier in the year revolving around the suicide of actress Carole Landis, who was the very married Harrison’s mistress.

“Moreover, Sturges was some way ahead of his time in attempting a much blacker style of comedy,” noted Smedley and Tom Sturges. “Modern cinemagoers are used to violence being treated for dark comedy in the works of such directors as the Coen Brothers and Quentin Tarantino but Sturges comic treatment of the razor-slashing murder of a defenseless, beautiful young woman was likely to alienate audiences in 1948. Sturges’ never recovered from the poor reception of “Unfaithfully Yours.” He would direct two more films that were just shadows of his beloved comedies. Sturges was just 60 when he died of a heart attack in 1959.

And as with so many films that have failed on initially release, “Unfaithfully Yours” has only grown in reputation. So much so, Fox did an unnecessary remake in 1984 starring Dudley Moore, aka “Cuddly Dudley,”  and Nastassja Kinski which hit sour notes with both reviewers and audiences.