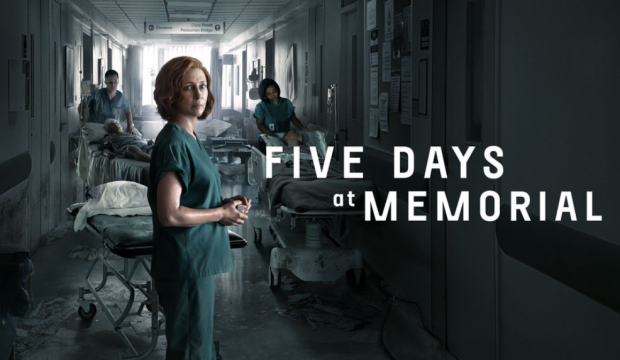 Apple TV +’s “Five Days at Memorial” is a difficult watch. Based on “Five Days at Memorial: Life and Death in a Storm-Ravaged Hospital,” an acclaimed 2013 book by Sheri Fink, the limited series was created by John Ridley and Carlton Cuse. The eight-part drama revolves around Hurricane Katrina’s siege of New Orleans in 2005 which caused massive flooding when the levees broke. After the water finally receded, 45 bodies were found in Memorial Hospital. Did these patients die of natural causes or was homicide involved?

“Five Days at Memorial” examines what happens in those five days when then hospital becomes flooded. Without power, stifling heat, dwindling food and water and fetid unsanitary conditions, the hospital resembles a crumbling war zone. Vera Farmiga stars as Dr. Anna Pou, a dedicated oncologist who becomes the subject of the investigation surrounding those 45 patients. And Cherry Jones plays nursing director and rotating “incident commander” Susan Mulderick. Both actresses recently joined the Washington Post and MSNBC’s Jonathan Capehart for a Post Zoom conversation about the series.

“What lead to this tragedy was a series of failures on every level of government and bureaucratic position,” said Farmiga (“Bates Motel,” “Up in the Air,” “The Conjuring”). “I think you could take this back down to the way the levees were built, right? So many things went wrong. You would have to look at racial and economic disparity in New Orleans. There was a domino effects of failure that brought us right up until this moment where 2,000 people in the hospital, not only just patients but family members who were sheltering there. It was a beacon of refuge for the people of New Orleans, where help just did not come.”

Shockingly, the hospital didn’t have an emergency plan to evacuate patients during a flood. “I think they always thought they would be prepared to get people out before major flooding event,” said Jones (“Succession,” “24”). “So [Susan] was as surprised as anyone. My heart goes out to all those people, especially those who were there every second of that disaster, in charge of saving every life they could and not having the tools they needed to do it.”

Though Dr. Pou was the focus of the investigation, Farmiga said she was “incredibly and fanatically committed to getting patients out. She indeed saved hundreds and hundreds of people and helped bring them to safety. But this was a war zone type of circumstance that just grounded these doctors and nurses to a pulp to such unimaginable exhaustion. The conditions were so putrid, so warped that this just slowly by slowly started wearing away at their stamina. It was just extreme duress.”

“Would you say that it was also wearing at their judgement?” asked Capehart.

“I think so,” said Farmiga. “By all accounts, she’s a truly amazing doctor, beloved by her patients. I wanted to exhibit that, but I think what I had to do, you have to consider all of these things that chipped away at that strength, at the stamina. Say what you will about the decisions that were made, my job is to make you feel her soggy sneakers, make you feel if you disagree with ultimately what the choices she made under extreme duress. I certainly believe it wasn’t just plain old evil that drove her to make the choices she made. I had to find the nuance of that exhaustion, of the disgust, of the sadness of the disappointment.”

Added Jones: “They did, I do believe, what they thought was humane.” Nevertheless, Dr. Pou was arrested a year after Katrina and charged with one count of second-degree murder and nine counts of conspiracy to commit second-degree murder. The grand jury didn’t indict her after reviewing the evidence and testimony from her co-workers at Memorial, eliminating any possibility of finding her guilty in a criminal trial.

Ultimately, said Farmiga, “Five Days at Memorial” is a parable of ‘’love, compassion, and kindness. It shines a spotlight on these exceptional human beings,” she explained. “In society, our healthcare works are just the best breed of homo sapiens. They operate with empathy, dedication and bravery. It’s ultimately a story that exhibits human perseverance, compassion and kindness. It takes a good look at the notion of how we come together next time disaster unfolds. How do we ensure more compassion? How do we ensure more empathy and preparedness? How are we doing that on a daily basis? How are we spreading light  in dark moments?”