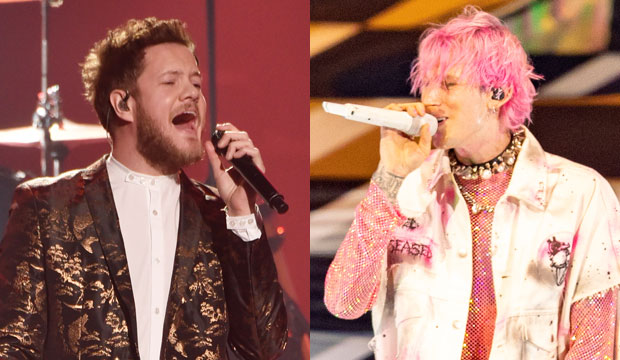 Since the MTV Video Music Awards brought back their Best Alternative category in 2020, Machine Gun Kelly has dominated, winning in 2020 for “Bloody Valentine” and again in 2021 for “My Ex’s Best Friend” featuring Blackbear. He’s nominated again in 2022 for “Emo Girl” featuring Willow. Can he go three-for-three, or will he be stopped by an artist with a much bigger hit?

As of this writing Imagine Dragons and JID are the front-runners for their collab “Enemy,” according to the combined predictions of hundreds of Gold Derby users. They get leading odds of 8/1. They only have one previous VMA victory: Best Rock for “Whatever It Takes” in 2018. And they were nominated for Best Alternative last year for “Follow You” but lost to MGK. The difference this time is that “Enemy” was significantly more popular, reaching number-five on the Billboard Hot 100 while MGK’s “Emo Girl” topped out at number-77 and their own “Follow You” only made it to number-68. Since the VMAs are a popularity contest, that could be all Imagine Dragons need to push them to the top.

SEEVMA predictions 2022: Who will win the nail-biter genre categories?

But it’s not a sure thing. These awards are decided by fans voting online and not by Billboard chart positions, so it’s possible MGK will have a more mobilized fan base. There’s also Panic! at the Disco, who are nominated for “Viva Las Vengeance” and previously beat Imagine Dragons in 2019 for Best Rock. Panic! have also been announced as performers at the event, which sometimes gives us a hint of who will end up winning.

With so many different factors at play in this category, our Top 24 Users who got the highest scores predicting last year’s VMAs are split six different ways with six betting on Imagine Dragons, five going for MGK, and five backing Panic! Our All-Star Top 24, who got the highest scores when you combine the last two years’ prediction results, are also divided: 11 are predicting Imagine Dragons, seven say MGK, and three say Panic!

But each of the other nominees have some support from Top Users: “I Wanna Be Your Slave” by Maneskin, “Saturday” by Twenty One Pilots, “Grow” by Willow and Avril Lavigne featuring Travis Barker, and “Love It When You Hate Me” by Lavigne featuring Blackbear. So you can’t really rule anyone out. Who are you betting on?