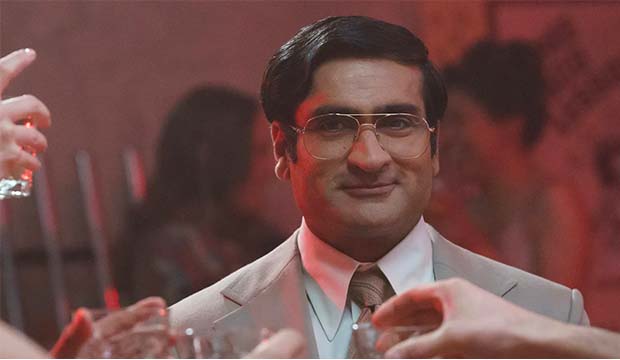 The series is inspired by the book Deadly Dance: The Chippendales Murders by K. Scot Macdonald and Patrick MontesDeOca. It tells the origin story of Somen “Steve” Banerjee (played by Nanjiani), an Indian American entrepreneur who started the stripper troupe, Chippendales.

Richard Roeper of Chicago Sun-Times writes, “Welcome to Chippendales features any number of imagined conversations and scenarios. But the major events depicted here really did transpire, which makes the ride all the more compelling and crazy.”

Matthew Jacobs of TV Guide starts off by cautioning viewers: “The title Welcome to Chippendales is both an invitation and a warning. Here, you’ll find all the chiseled gyrators anyone could want from the most famous male strip club ever erected. But upon entering those doors, you submit to whatever lawlessness awaits.” Jacobs praises the cast, “Annaleigh Ashford takes MVP as Steve’s girlfriend, whose blonde hair and naive-seeming eyes hide the bookkeeping acumen that takes Chippendales to profitable heights.” In the end, “The show dresses its sorrowful core in spandex and bow ties, painting a portrait of prosperity undone by pride. What’s more American than that?”

Kristen Baldwin of Entertainment Weekly begins by noting that the case has captivated many, but this is the first limited series about it. The show is “buoyed by commanding performances from stars Kumail Nanjiani and Annaleigh Ashford…As Irene, Ashford is the series’ emotional center, and she and Nanjiani have a tender, enchanting chemistry.”

Daniel D’Addario of Variety is less impressed but does note that it is not the fault of the real life individuals. “It’s not that Steve Banerjee isn’t a compelling figure, nor that Nanjiani plays the part poorly, but he’s interesting in one particular way, and Nanjiani plays the role totally straight.” The issue of the series is one that many projects tend to fall into without realizing it: there is a crime but everything surrounding it rings hollow. “A show called ‘Welcome to Chippendales’ shouldn’t forgo opportunities to dazzle or charm us; instead, just like the drinks Irene serves, this tale feels watered-down.”

Erin Brady of Slashfilm begins by noting that “While the troupe today is known for the shirtless gyrating and silky-smooth chests of its dancers, it is also a company plagued by the things founder Somen “Steve” Banerjee did to fuel its meteoric rise.” This limited series sets out to explain just what those actions were and holds nothing back. “Ultimately, though, it is Nanjiani’s Banerjee that stands as the series’s best performance. It’s hard to say that his evolution is straightforward, as we see early on that he has a bit of selfishness that grows as the series progresses. However, Nanjiani portrays him in a nuanced manner that doesn’t ignore his misdeeds but doesn’t allow them to define him.”