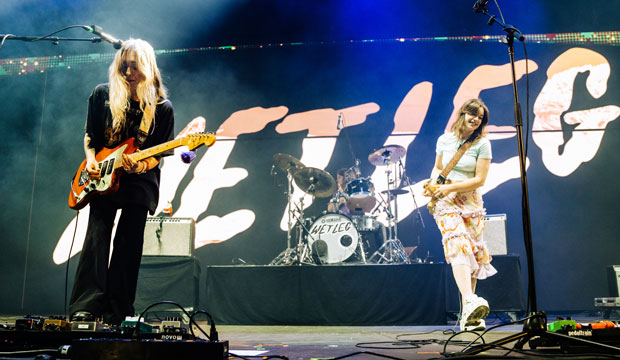 One of the most innovative and exciting fields at the Grammys every year is the alternative field. It’s not rare to see new artists and critically beloved records in the field instead of the name checks that happen elsewhere (although one or two may slip in). This year the Grammys recognized the genre’s growing base in popular culture and within the academy by adding a new category for alternative music songs, which used to be relegated to either pop or rock. With all that in mind, let’s see who might win big in the alternative field this year.

The front-runner here is likely Wet Leg for their hit “Chaise Longue.” The song has the second most streams out of the nominees, racking up almost 38 million on Spotify and 8.8 million on YouTube as of December 2022. Most importantly, though, Wet Leg got a lot of love on nominations day, earning an Alternative Album nom as well as a bid for Best New Artist. “Chaise Longue” is also very acclaimed, as evidenced by year-end best-of-2022 lists, where their self-titled album ranks third in the aggregate as of this writing. If Wet Leg were to lose, perhaps it will be to fellow acclaimed Alternative Album nominees Big Thief with their song “Certainty.” I also wouldn’t rule out the Yeah Yeah Yeahs here, especially since voters had to scroll all the way down to find them on the alphabetical ballot, meaning they likely had a lot of passion (much like Wet Leg).

Out of the remaining two, Florence and the Machine (“King”) are overdue, so perhaps this is their year. That said, their “Dance Fever” missed Alternative Album, so they might be weak. And there’s also Artic Monkeys’ “There’d Better Be A Mirrorball,” but it wasn’t their biggest or most acclaimed song and voters might wait to reward them next year for their album proper.

SEEBjork, the Susan Lucci of the Grammys, is the early favorite to FINALLY win Best Alternative Album

This is another category that might end up being Wet Leg vs. Big Thief. Wet Leg has performed slightly better on critics’ year-end lists, and their album is bigger commercially than Big Thief’s “Dragon New Warm Mountain I Believe in You.” However, there is an argument to be made that Big Thief is overdue, especially after churning out so many acclaimed albums over the past six years. Big Thief could also benefit from having a more diverse sound sonically, since Wet Leg’s album can feel a bit samey. I’m still going with Wet Leg, though, especially since their album is also nominated for Best Engineered Album, Non-Classical, and albums nominated there tend to win in their genre.

There is a case to be made for Bjork though. While “Fossora” isn’t her biggest or most acclaimed album, it might be known among voters that she has yet to win despite 16 career nominations, which could lead some of them to go for her. However, the Grammys don’t tend to do overdue wins unless there’s actual passion behind the album or artist, so consider her more of a dark horse.