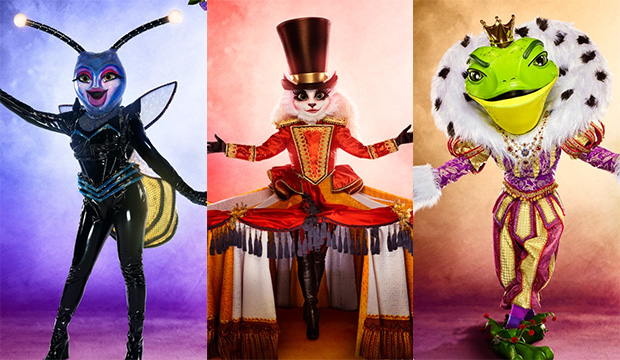 SEE ‘The Masked Singer’ Season 7 winner predictions: Firefly flutters ahead of Ringmaster, Prince in our odds

Play along with host Nick Cannon and celebrity panelists Ken Jeong, Jenny McCarthy, Nicole Scherzinger and Robin Thicke. A winner will be crowned in the “Season Finale: I’m Good, Thanks for Masking” episode of “The Masked Singer” airing Wednesday, May 18 (8:00-9:01 PM ET/PT) on FOX.

Two weeks ago,  En Vogue was revealed as Queen Cobra and became the 12th performers eliminated from Season 7. Their exit was preceded by Duff Goldman as McTerrier, Joe Buck as Ram, Jorge Garcia as Cyclops, Jordan Mailata as Thingamabob, Christie Brinkley as Lemur, Penn & Teller as Hydra, Dog the Bounty Hunter as Armadillo, Jennifer Holliday as Miss Teddy, Rudy Giuliani as Jack in the Box, Kirstie Alley as Baby Mammoth and Shaggy as Space Bunny. Which three celebs will join them in unmasking tonight?

Team Good dominated the season and now holds all three spots in the finale. Below is a snapshot of each Season 7 finalist.

Be sure to make your predictions and predict this season’s winner of “The Masked Singer.” You can keep changing your predictions until just before the finale airs on Fox. You’ll compete to win eternal bragging rights and a spot on our “The Masked Singer” Season 7 leaderboard. See our contest rules and sound off with other fans in our reality TV forum. Read more Gold Derby entertainment news.

Who's performing on 'The Masked Singer' tonight? May 11 lineup includes best performances from Season…

En Vogue ('The Masked Singer' Queen Cobra) unmasked interview: 'It took us out of our comfort zone'…

When is 'The Masked Singer' Season 7 finale between Firefly, Ringmaster and Prince?