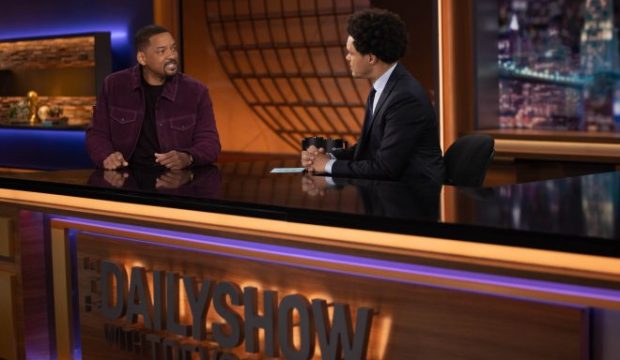 In his first television interview since slapping Chris Rock at the Oscars earlier this year, “Emancipation” star Will Smith told Trevor Noah he hoped filmmaker Antoine Fuqua, co-star Ben Foster, and the other artisans involved in the project wouldn’t be penalized by awards voters “based on a horrific decision on my part.”

“It’s Antoine’s masterpiece. He has created an absolute masterpiece. Bob Richardson, the DP. Ben Foster. All the way down. These top artists in the world have done some of the best work of their career,” Smith told Noah on “The Daily Show.” “The idea they might be denied because of me is like… that is killing me dead. The thing that is so critical for me is that these people came and they trusted me and they were down for me, and I just hope their work will be honored and their work will not be tainted based on a horrific decision on my part.”

Smith won Best Actor at the Oscars this year for “King Richard,” a coronation that followed decades of work as one of the biggest movie stars on the planet. But the victory was tainted because of Smith’s actions at the ceremony. Prior to accepting the Best Actor award, Smith got into an altercation with comedian Chris Rock, who made a joke about Jada Pinkett-Smith, Smith’s wife, while presenting Best Documentary. After shouting profanities at Rock from the audience, Smith walked up to the stage and slapped Rock across the face. The incident made global headlines and Smith later apologized and resigned from the academy. In the aftermath, the academy punished Smith by banning him from academy events, including the Oscars ceremony, for a period of 10 years. Smith, however, can still be nominated by the academy during that time, and “Emancipation” presents two opportunities for him to receive Oscar recognition from his peers: Best Actor and Best Picture, as he’s a producer on the Fuqua film.

Smith has apologized multiple times for the Rock incident but hadn’t faced questions in a televised interview until Monday night. After discussing “Emancipation” with Smith, Noah turned his attention toward the infamous slap and what happened.

“That was a horrific night, as you can imagine,” Smith said to Noah. “There’s many nuances and complexities to it, you know. But at the end of the day, I lost it, you know?”

Asked by the host, what he learned following the incident, Smith added, “I guess what I would say is you just never know what somebody is going through. … I was going through something that night, you know? Not that that justifies my behavior at all, I would just say you’re asking what did I learn. It’s that, we just got to be nice to each other, man. It’s hard. I guess the thing that was most painful for me is I took my hard and made it hard for other people. I understood the idea when they say hurt people hurt people.”

After Noah, who said he considered Smith a personal friend, suggested Smith behaved in that fashion perhaps because he felt the general public wanted him to show some level of aggression, Smith added, “It was a lot of things. It was the little boy that watched his father beat up his mother, you know? All of that just bubbled up in that moment. That is not who I want to be.”

Noah proved to be an empathetic interviewer toward Smith, saying the slap shouldn’t define the Oscar winner. “I think everybody can make a mistake,” the host said. But Smith said he understood “how shocking it was for people” to see him exert physical violence against Rock.

“I was gone, dude. I was gone,” he said later in the interview. “That was a rage that had been bottled for a really long time. I understand the pain.”

“Emancipation” is out Friday in select theaters before it debuts on Apple TV+ on December 9. Watch the full interview below.