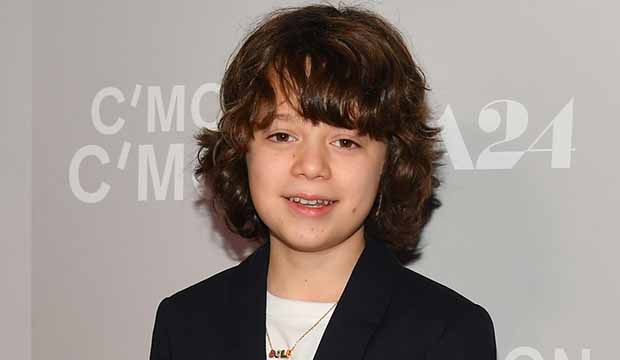 Mike Mills’ critically-acclaimed indie drama “C’mon C’mon” explores the tenuous but transformational bond forged between radio journalist Johnny (Joaquin Phoenix) and his precocious 9-year-old nephew Jesse (Woody Norman), when they are unexpectedly thrown together by Jesse’s mum, Viv (Gaby Hoffman) while she takes care of Jesse’s mentally-ill father Paul (Scoot McNairy). Norman has been singled out for praise for his performance and could well ride these rave reviews to an Oscar nomination.

As Carlos Aguilar from The Wrap observes: “In a tête-à-tête with Phoenix, Norman carves out a jaw-dropping turn from delicate mood swings and mischievous charm.” Other critics have been equally effusive about Norman’s work in Mills’ fourth narrative feature including Richard Brody of The New Yorker: “Norman, impulsive and spontaneous yet wondrously precise, is one of the great child actors. He brings a keen sense of command to the role and never lets it veer toward easy sentimentality or endearing quirkiness, and his dialectical brilliance, his ability to hold the elaborate and emotional dialogue aloft with an impulsively inflected expressivity, makes it seem as though he is improvising the best lines”.

The 12-year-old Brit proves an effortlessly captivating, “radiantly authentic” screen partner to Phoenix (Rodrigo Perez, The Playlist). He goes toe-to-toe with the Oscar winner throughout the picture, scene-after-scene, with “amazing naturalism and ease” (Troy Sauveur, The Austin Chronicle). “Norman’s performance is a rarity in that it displays obvious talent while preserving a childlike playfulness that never feels over-acted”, writes Natalia Keogan from Paste Magazine. And, as Mark Feeney of The Boston Globe concludes: “Watching Norman, you realize the limitations of delight. His Jesse is spooky-good. Anything less, and “C’mon C’mon” just wouldn’t work. Thanks to Norman, it works.”

Norman has reaped Breakthrough Performance nominations from many critics groups and just recently landed his first bid for Best Supporting Actor from the North Carolina Film Critics’ Association. But most young performers singled out by the academy appear in Best Picture nominees (“Whale Rider” star Keisha Castle-Hughes was the rare exception to this rule.) To date,  “C’mon C’mon” has received just 6 Best Picture nominations from the precursors. Surprisingly it was snubbed by the Critics Choice Association which did nominate Norman in the Young Actor/Actress category.

Norman could get a boost from SAG, which often nominates child actors. Last year, Helena Zengel was cited for her featured role in Paul Greengrass’ “News of the World”. The BAFTAs has also shown itself to be more welcoming to child performers following the introduction of a new jury voting system for nominations. Alan Kim was recognised in best supporting actor last year for his irresistible performance in “Minari.” And BAFTA famously champions fellow Brits, so Norman has a hometown advantage.