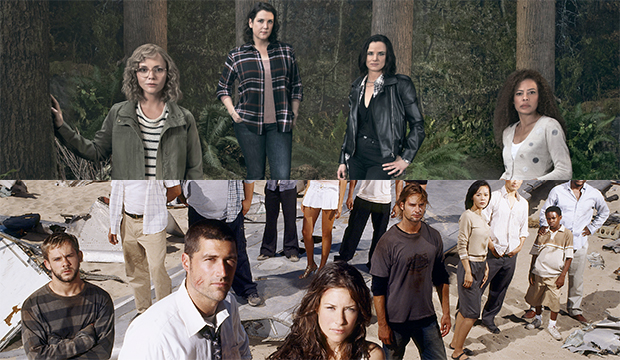 The last time a TV show about a plane crash was nominated at the Emmys, it wound up winning Best Drama Series (2005). Seventeen years later, can Showtime’s freshman series “Yellowjackets” now follow the same path as that popular ABC program, “Lost”?

Sure, the two series center around plane crash survivors, but the “Yellowjackets”/”Lost” comparisons don’t stop there. They both utilize non-linear storytelling techniques to illustrate how the ordeal affected the character’s lives after they eventually got out of the wilderness/off the island. Pregnant girls, creepy cabins, French warnings and hungry bears (grizzly vs. polar) can be found in both exotic locales. And the characters on each show are haunted by strange symbols, whether it’s a carved ritual figure or an eight-sided DHARMA logo.

“Yellowjackets” is created by Ashley Lyle and Bart Nickerson and tells the story of a girls soccer team that crashes in the Canadian wilderness in 1996 and struggles to survive for a year and a half. The acclaimed series also chronicles their current lives in 2021, with experienced actresses portraying the adult counterparts. Sophie Nélisse and Melanie Lynskey play Shauna, Jasmin Savoy Brown and Tawny Cypress play Taissa, Sophie Thatcher and Juliette Lewis play Natalie, and Sammi Hanratty and Christina Ricci play Misty.

Meanwhile, Jeffrey Lieber, J. J. Abrams and Damon Lindelof created “Lost” in 2004, with Lindelof and Carlton Cuse serving as showrunners. The character-driven fantasy series aired for six seasons and focused on the survivors of Oceanic 815, who crash-land on a mysterious island in the middle of the Pacific Ocean. They soon realize they are not alone, as a black smoke monster welcomes them to their new home.

“Yellowjackets” is up for a pair of 2022 Critics Choice Awards bids for Best Drama Series and Best Drama Actress (Lynskey), with the winners being announced on March 13. (“Lost” didn’t exist when this group started honoring television shows.) In addition to its perfect 100 score at Rotten Tomatoes, “Yellowjackets” became America’s water cooler TV obsession during its 10-episode run from November to January, much like “Lost” back in the mid-oughts.

“Lost” took home 10 Emmys during its six seasons on ABC: series, directing (Abrams), casting, music, picture editing and visual effects in 2005, supporting actor (Terry O’Quinn) in 2007, sound mixing in 2008, supporting actor (Michael Emerson) in 2009 and picture editing in 2010. If “Yellowjackets” follows a similar trajectory and wins Best Drama Series at the 2022 Emmys, it would be the second Showtime program to prevail after “Homeland” (2012).