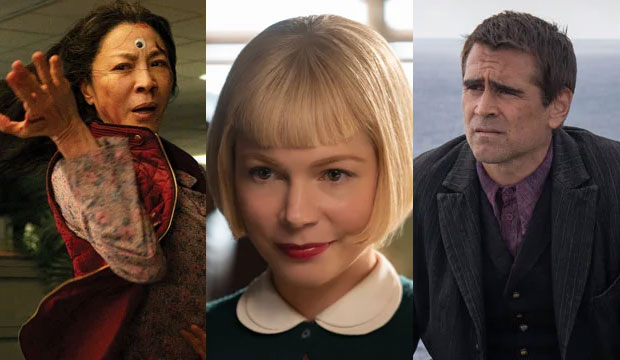 The 2023 Academy Award nominations were announced on Tuesday morning, January 24, and as I wrote recently you can learn a lot about a film’s Best Picture chances from the recognition they receive: how many nominations did they get, in what categories, and how did they do relative to expectations? Let’s break down those results below. And check out the complete list of nominations here.

“The Banshees of Inisherin” — This understated film about the sudden dissolution of a friendship pretty much maxed out on its possible nominations, getting all four of its expected acting bids (Colin Farrell, Brendan Gleeson, Barry Keoghan, and Kerry Condon, all first-timers), plus writing, directing, editing, and score. It has everything it needs to be considered a top contender for Best Picture.

“Everything Everywhere All at Once” — It’s the most nominated film of the year with 11 bids. That’s less than Critics Choice where it had 14, but more than the BAFTAs where it got 10. Like “Banshees,” it scored acting nominations for four first-timers (Michelle Yeoh, Ke Huy Quan, Jamie Lee Curtis, and Stephanie Hsu), plus writing, directing, and editing. And while it missed nominations for its production design and sound, it compensated for those with surprise noms for its score and original song “This is a Life.” There’s no reason not to consider this the front-runner to win Best Picture.

“The Fabelmans” — After a disastrous BAFTAs where it received just a single nomination for its screenplay, the rebound to seven nominations here is significant. It’s up for Best Picture, Best Director (Steven Spielberg), and it eked out a Best Actress nom for Michelle Williams after she missed at both the SAG Awards and the BAFTAs. No editing nomination, but this has to be considered a successful morning for the film after an up-and-down season.

“TAR” — Besides “Banshees” and “Everything Everywhere,” this is the only film to score nominations in all the key categories of writing, directing, acting (for lead Cate Blanchett), and editing. That editing nomination came as a surprise, and so did the film’s bid for cinematography, so while its six total nominations pale in comparison to the above front-runners, this film has put itself in their elite company.

“Top Gun: Maverick” — Also with six nominations, this is the most nominated sequel of the year. But that’s not the only reason it’s up. While it didn’t score a directing nomination for Joseph Kosinski like it did at the Directors Guild Awards, this high-flying action pic scored a somewhat surprising nomination for Best Adapted Screenplay. The last film to win Best Picture without a writing nomination was “Titanic” (1997), so that put “Maverick” decisively in the conversation to win the top prize.

“Triangle of Sadness” — One of the big surprises of the morning was the over-performance of this social satire relative to expectations. Gold Derby’s odds correctly predicted that it would be nominated for Best Original Screenplay, and we knew it was on the bubble for Best Picture, but Ruben Ostlund‘s nom for Best Director was a major coup. We’d ranked him 13th in our odds. The big surprise then is that, despite all that support from the academy, “Triangle” couldn’t get Dolly De Leon into the Best Supporting Actress race.

“All Quiet on the Western Front” — It’s tied with “The Banshees of Inisherin” as the second most nominated film with nine bids, so how could it possibly be down? Like “Dune” last year, this film’s heavily nominated technical achievements couldn’t get filmmaker Edward Berger into the Best Director lineup, and the film’s editing wasn’t nominated either (another strange miss for a visually intense action film). That’s not necessarily fatal; “CODA” won Best Picture without directing or editing bids last year, and “All Quiet” did get a crucial writing nom. But it’s not a good sign for a film as technically audacious as this one.

“Avatar: The Way of Water” — It’s a Best Picture nominee, which is an impressive achievement for a sequel (see above re: “Top Gun: Maverick”), but its only craft nominations are for production design, sound, and visual effects. It missed in the cinematography and editing races, and James Cameron couldn’t quite crack the Best Director top five. It has fewer than half the nominations of the original “Avatar” (2009), which got nine.

SEEHere’s how the Oscars decide the Best Picture winner

“Elvis” — Eight nominations is pretty great for this Best Picture nominee, but it isn’t up for writing or directing. We weren’t expecting it in either category, but they would have gone a long way towards making this film a Best Picture threat.

“Women Talking” — Honestly, the fact that this film earned a Best Picture nomination at all is a victory. It was shut out at the BAFTAs and skunked by the Producers Guild. Its only other nomination is for Sarah Polley‘s screenplay, but after a topsy-turvy season, I’m considering this glass half-full.

I put the film in the “About the Same” column. It winning Best Picture was barely in the realm of possibility at the time. So the race is not over for any of the above films until it’s over.